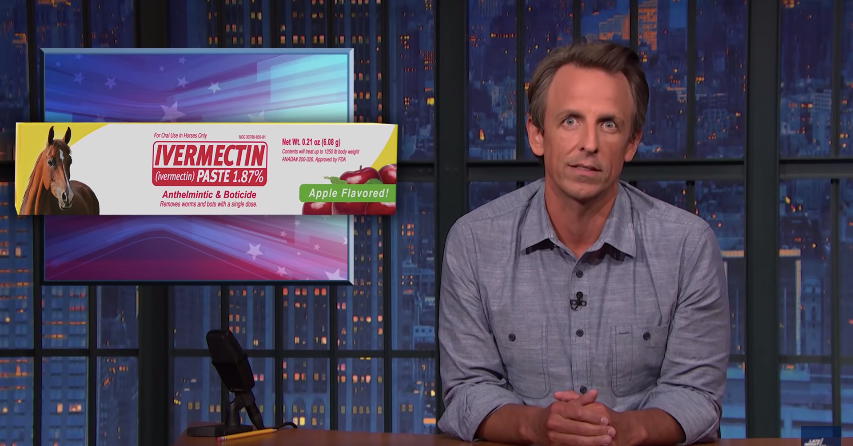 “Any time someone tries to sell you a ‘miracle drug’ that ‘they’ don’t want you to know about, you should be suspicious.” — SETH MEYERS

“I gotta say, when I first heard that Fox News was pushing Ivermectin, I knew it was gonna be bad, but I was not expecting it to be horse dewormer. It sounds like the name of a drug they give supersoldiers in a Paul Verhoeven movie to turn them into Robocops.” — SETH MEYERS

“You know someone at the company that made Ivermectin once said, ‘Hey, should we put “not for people” on the horse pill labels?’ and someone else said, ‘There’s a picture of a horse on the bottle, it’s fine!’” — SETH MEYERS

“First, it was hydroxychloroquine, then it was bleach, powerful lights, now it’s horse dewormer? I’m honestly terrified to imagine what’s next. One day, we’re gonna wake up and Brian Kilmeade’s gonna be telling people you can cure Covid by eating kibble and sleeping in a bed of kitty litter: [imitating Kilmeade] ‘Works for me. that’s why I blink as often as a sphinx.’” — SETH MEYERS

“You know who the real victims are here? The horses who can’t get their worm pills.” — SETH MEYERS

“You know how Jeff Bezos went up into space last month with his cute little cowboy hat? Well, now they’re selling mini-replicas of his rocket. Yes, there it is — are we allowed to show that on T.V.?” — RuPaul, guest-hosting “Jimmy Kimmel Live”

“Yep, there it is, anxiously waiting to probe your galaxy.” — JIMMY FALLON

“It measures 10 inches from the base to the tip. Yeah, I’ve heard that before. I’ll be the judge of that.” — RuPaul