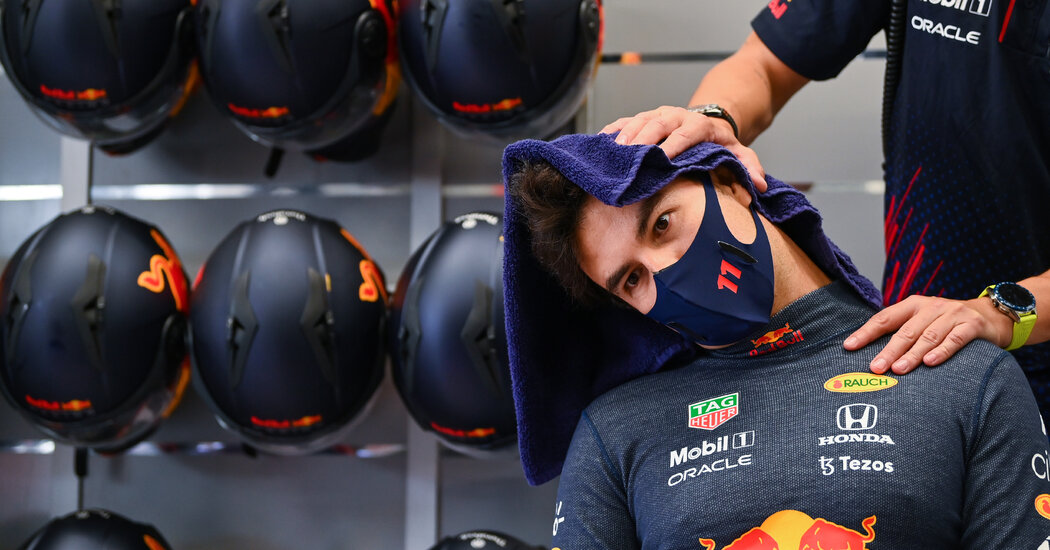 When Red Bull Racing signed Sergio Pérez of Mexico for 2021, the team went against its usual approach to hiring drivers.

Since the team made its debut in 2005, Red Bull had signed a driver from outside of its own academy for young drivers just once: Mark Webber in 2007.

But after struggling to find a replacement for Daniel Ricciardo, who quit the team after 2018, Red Bull turned to Pérez, 31, for this season.

Red Bull had signed Pierre Gasly of France as Ricciardo’s replacement in 2019, but Gasly lasted just 12 races before Red Bull replaced him with Alexander Albon of Thailand, who finished the 2019 season and returned for 2020. But he struggled to regularly challenge Max Verstappen, the team’s top driver, prompting Red Bull to sign Pérez.

After seeing Gasly and Albon struggle, Pérez said he knew that the car he would be driving at Red Bull did not suit every driver. The team’s cars have traditionally required an aggressive driving style similar to Verstappen’s to get the best out of its lead driver. By contrast, Pérez is known for his smooth approach and excellent tire management skills.

“I was aware of the struggles that very good drivers had,” Pérez said in an interview. “I knew that I was coming to a particular car that is not made for everyone, and I was willing to adapt to it.”

Since making his Formula 1 debut in 2011, Pérez has raced for smaller teams — including Sauber and Racing Point — none of which have a front-running car. In about 200 Grands Prix, he has only two wins. Joining Red Bull was his first opportunity to race for a team that regularly fights for championships.

It took only six races for Pérez, who is also known by his nickname, Checo, to score his first win, in Azerbaijan, for Red Bull. He became the first Red Bull driver other than Verstappen to win a race in over three years.

It was a breakthrough for Pérez, who said he felt “very comfortable with the car” in Azerbaijan and was “able to do things that normally the car wouldn’t allow me.”

Pérez has scored 108 points this season, four more than Albon did in 2020. Verstappen has won seven races and has 224.5 points, putting him in the lead, ahead of the defending champion, Lewis Hamilton of England. The gap left Pérez hungry for better results.

“I’m not satisfied because I want more,” he said. “I expected more, to be able to adapt to the car.

“But I’m not giving up. I’m working really hard with the engineers to try to find the right direction, make sure I know what the car needs and to be able to put in the Azerbaijan performances every single weekend.”

Pérez’s performance has been enough to persuade Red Bull to extend his contract. The team announced at the end of August that he would be staying for 2022.

“It’s good for everybody to get that out of the way relatively early, so everybody is settled going into the second half of the season,” said Christian Horner, the team principal. “He’s getting more and more familiar with the car. That will naturally improve. He’s had some bad luck on race days.”

This year, Pérez will play a big role for Red Bull in its bid to win a first Constructors’ Championship since 2013. Mercedes has won the title every year since, but leads Red Bull by only 12 points.

“Sergio deserves to be in that seat, no doubt about that,” said Toto Wolff, the team principal of Mercedes. “When you look at Baku” — referring to the Azerbaijan race — “he collected the points, he won the race, and he’s been getting to grips with the car.”

Wolff added that because of Pérez, “the Constructors’ Championship has become as difficult and challenging as the Drivers’ Championship” for Mercedes.

Pérez may not be in contention for the drivers’ title, but he can still play an important role by helping Verstappen. This was evident at the French Grand Prix in June, when Pérez moved aside and let his faster teammate overtake him after a change in strategy dropped Verstappen behind.

This teamwork saved Verstappen a couple of seconds that would normally have been lost when fighting to overtake another car. That was critical when Verstappen made the winning pass on Hamilton with one lap to spare.

“He’s been a really good teammate,” Verstappen said. “Checo’s a very nice guy, and it’s really enjoyable to work with him, so from that side it’s all been going really well.

“France was a great race for the whole team. We just need to keep pushing as a team to deliver a competitive car, and I’m sure both of us, we can do a good job.”

Horner said Pérez’s integration with the team had been “seamless.” He has also impressed Red Bull’s engine supplier, Honda, which said Pérez had contributed heavily to the engine’s development.

“Checo has been giving us a lot of suggestions on how to improve the power unit,” said Toyoharu Tanabe, Honda’s Formula 1 technical director.

“He has lots of questions,” Tanabe said. “So it works very well, to improve our engine performance. I feel with Checo, we are getting stronger as a team.”

Pérez said that 2022 would be a “massive opportunity” for him. The cars are set for a significant change in aerodynamic design for next season, which is expected to make the Red Bull car easier to drive.

“Next year, everyone starts from zero,” he said. “There is no secret that I have been struggling with the car at times. It is going to be such a different concept of car. With my experience, there is a lot I can influence and I can bring to the team.”

For the rest of this year, Pérez said he still had “a lot of work to do” to aid Red Bull’s push for both championships. On a personal level, he would love to win his home Grand Prix in Mexico City on Nov. 7.

“Winning in Mexico, that would be something amazing,” he said. “To give victory to my country would be very special. It’s what we live and dream for every single day, and what we are working hard to do.”