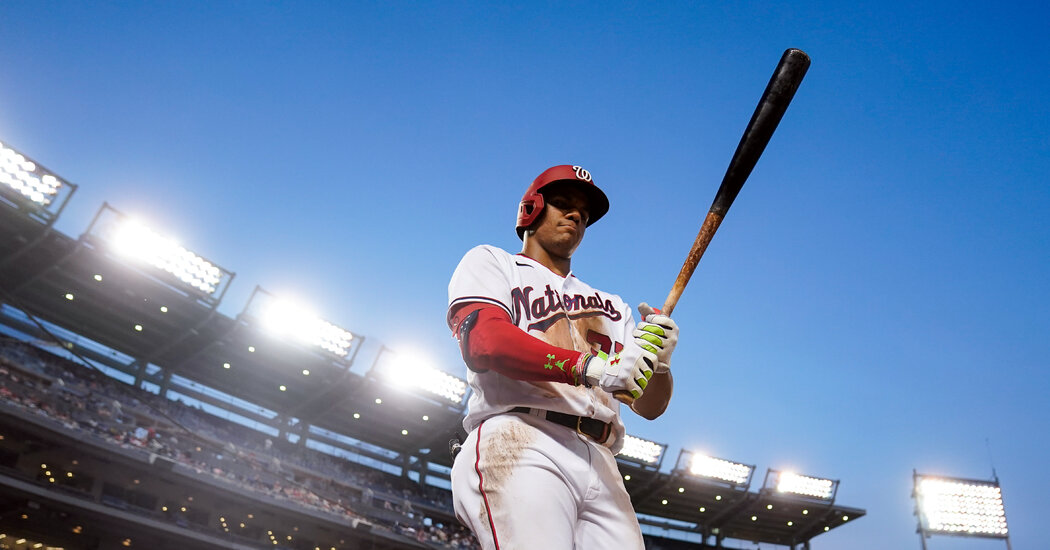 In one of the biggest deadline trades in baseball history, outfielder Juan Soto of the Washington Nationals is headed to the San Diego Padres in a blockbuster deal that was announced by both teams ahead of the 6 p.m. trade deadline on Tuesday.

The trade, which had been held up earlier in the day because first baseman Eric Hosmer invoked the limited no-trade clause in his contract, sends Soto and first baseman Josh Bell to the Padres in exchange for an impressive haul of prospects: shortstop CJ Abrams, outfielders Robert Hassell III and James Wood, the left-handed pitcher MacKenzie Gore and the right-handed pitcher Jarlin Susana.

First baseman Luke Voit was added to the deal with the Nationals later on Tuesday to replace Hosmer, who was subsequently traded to the Boston Red Sox.

Mike Rizzo, the Nationals general manager who signed Soto out of his native Dominican Republic as a 16-year-old, told reporters that it was a “difficult day” and that there was no edict to trade Soto.

Rizzo told reporters that he felt the Nationals were not going to be able to keep Soto long term and thought the most the team could get in return for him was now. He commended the Padres and their general manager, A.J. Preller, for not only meeting but exceeding the high asking price. “They’re not afraid,” Rizzo said.

Soto, 23, had been the subject of intense trade speculation for many weeks. It is rare that a slugger that talented and that young is shipped away.

The most similar move in recent years was when the Los Angeles Dodgers acquired Mookie Betts from the Boston Red Sox, but even in that case, he was 27 — four years older than Soto.

But the Nationals, who won the 2019 World Series with an exciting young core, have struggled on the field since. And as those struggles mounted, they have been compounded by the departures of several notable figures from their winning years: outfielder Bryce Harper, shortstop Trea Turner, third baseman Anthony Rendon, pitcher Max Scherzer and Soto are all gone.

After the rebuilding Nationals failed to sign Soto to a contract extension — he turned down the latest effort, a 15-year, $440 million deal that would have been the largest contract in baseball history — the team began entertaining offers for him. Soto is slated to reach free agency in 2025, so the Padres will have him under team control for the next three pennant races even without an extension.

“It’s hard,” said Nationals designated hitter Nelson Cruz, one of Soto’s mentors who noted that Soto had bought a house in the Washington area. “He was the face of the franchise. I know we’re going to miss him and the fans will miss him, too.”

Added Nationals reliever Sean Doolittle: “Even though there was a chance of this, it seems like, for the last month or so, it still feels a little bit shocking and disorienting.”

The Padres, with a deep farm system, agreed to fork over several of their best young players and prospects in exchange for Soto and Bell, a free agent at the end of this season.

Abrams, who made his major league debut in April, and Gore, who recently landed on the major league injured list with an elbow injury, were each once the Padres’ top overall prospect. Hassell currently holds that title, according to M.L.B.com’s rankings, while Wood, a 6-foot-7 center fielder, ranks third. Susana has a 2.45 E.R.A. in rookie ball.

All of the players the Nationals acquired from San Diego, other than Voit, a former Yankees slugger, are 23 or younger. While the Padres have been furiously improved at the trade deadline with the additions of closer Josh Hader, infielder Brandon Drury, Bell and Soto, the Nationals entered Tuesday with the worst record (35-69) in baseball and even less talent in the major-league clubhouse.

“It’s not going to be easy for the fans,” Nationals reliever Tyler Clippard said. “It’s a generational type player and anytime you lose that it’s hard for us. But it’s probably harder for the fans because I’m sure they wanted him to be around for the next 15 years.”

Soto’s addition to the Padres vaults them into World Series contention. Trailing the Dodgers by 12 games in the N.L. West race through Monday, San Diego is in a prime spot to nab one of the league’s three wild-card spots. Soto joins a dangerous lineup that includes the All-Star third baseman Manny Machado, shortstop Fernando Tatis Jr. (who is expected to return from a wrist injury soon), the All-Star second baseman Jake Cronenworth and Bell, who was hitting .301 before the trade.

Drury, who was acquired from the Cincinnati Reds, can play multiple defensive positions and was hitting .274 with 20 home runs at the time of the trade, while Hader, the longtime closer of the Milwaukee Brewers, was an All-Star last month before a rough stretch in recent weeks caused his E.R.A. to balloon.

But the undisputed jewel of the day was Soto, a two-time All-Star outfielder, who hit .246 with 21 home runs and an .894 on-base plus slugging percentage in 101 games for the Nationals in 2022. Those numbers qualify as a down year for the young superstar. Previously, he won the World Series in 2019, a batting title in 2020 and the Home Run Derby last month. Since his rookie season, in 2018, only nine players had accumulated more wins above replacement through Monday, according to FanGraphs.

“We were so lucky to have him,” Doolittle said. “We don’t win that World Series without him. He’s probably the best player in baseball. He’s having a down year and his O.P.S. is still at .900. His comps are Hall of Famers.”