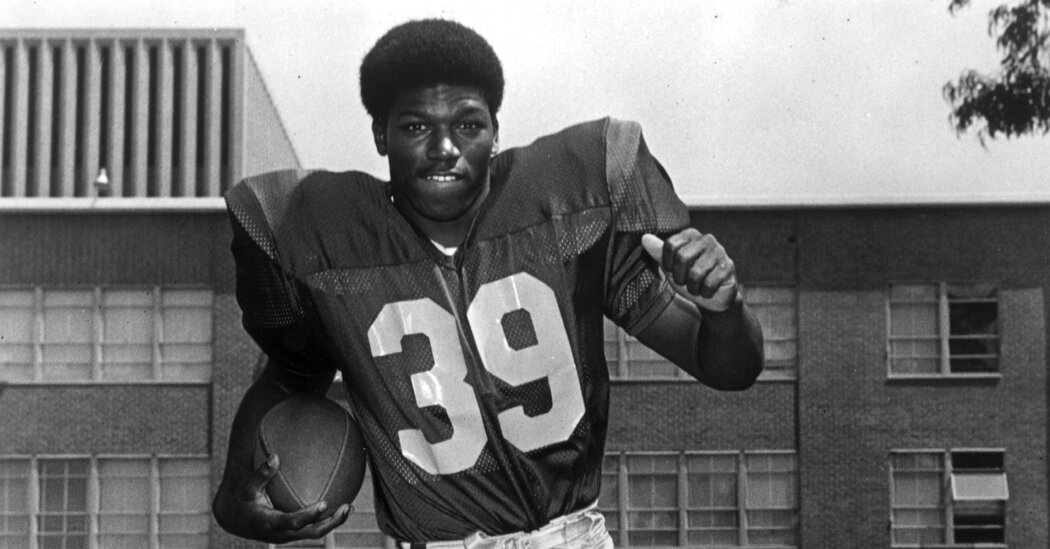 By 1977, Alabama had 17 Black football players on scholarship.

Samuel Lewis Cunningham Jr. was born on Aug. 15, 1950, in Santa Barbara, Calif. His father was a railroad worker. His mother, Zoe (Ivory) Cunningham, died when he was young; he was raised by his father and stepmother, Mabel (Crook) Cunningham, a nurse.

Sam and his brothers, Anthony, Bruce and Randall, a future quarterback with the Philadelphia Eagles and three other N.F.L. teams, were all athletic. Sam was introduced to organized sports in elementary school, where he played basketball, baseball, volleyball and flag football.

He was recruited by Coach John McKay to U.S.C. and, in his three seasons on the team, gained 1,579 yards on 337 carries. He scored four short-yardage touchdowns in the Trojans’ 42-17 victory over Ohio State in the 1973 Rose Bowl, which wrapped up a 12-0 season. That year’s team was ranked No. 1 in college football.

Cunningham was selected by the New England Patriots with the 11th overall pick in the 1973 N.F.L. draft. In his nine seasons with the team, he accumulated 5,453 rushing yards, including 516 in his first season, a Patriots rookie record, and 1,015 in 1977, making him the second Patriot to exceed 1,000 yards in a season. He sat out the 1980 season in a contract dispute, which prompted the Patriots to trade him to the Miami Dolphins. But he failed the team’s physical and returned to the Patriots shortly before the 1981 season.

“Sam ‘Bam’ Cunningham was one of my favorite players throughout the ’70s, and my sons all loved him,” the Patriots’ owner, Robert Kraft, said in a statement. “After I bought the team in 1994, it was my honor to welcome him back to the team on multiple occasions, recognizing him as a 50th-anniversary team member and again for his induction into the Patriots Hall of Fame.”

Cunningham became a landscape contractor after his playing career ended.

In addition to his wife, he is survived by his daughter, Samahndi Cunningham; and his brothers.

Cunningham joined Jones and Davis in the backfield early in the first quarter of that historic 1970 game against Alabama.

“I didn’t go into any game looking to change history, even though history has a tendency to be changed by things of that nature,” he told The Santa Barbara Independent this year. “I always tried to play to the best of my ability, and that’s what I did that evening. I was put in the right spot and got touched by the hand of God.”