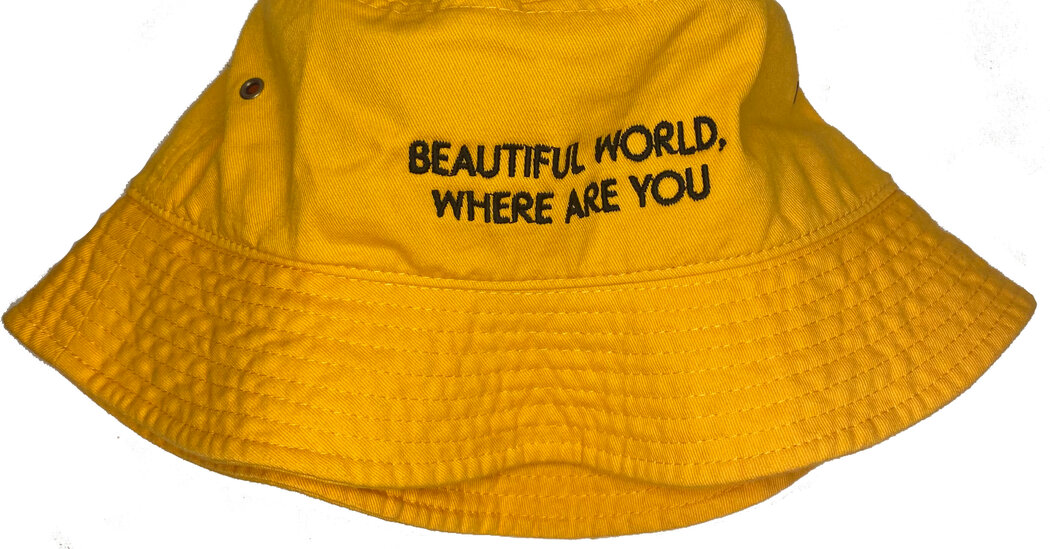 This summer, advance copies of “Beautiful World, Where Are You” have graced the Twitter feeds and Instagram Stories of the literary internet — humble-brags that the readers had gotten their hands on the book ahead of its Sept. 7 release.

Soon, hype for the third novel by Ms. Rooney, the 30-year-old author of “Conversations With Friends” and “Normal People,” who has been hailed as the first great millennial novelist, began to fuel a secondary market. According to The Guardian, one galley sold on eBay for $209.16 in June, despite the publisher clearly indicating that such copies were “not for resale.”

As the release date has drawn nearer, anticipation has approximated streetwear-drop levels. In August, Ms. Rooney’s publisher, Farrar, Straus & Giroux, distributed yellow bucket hats and tote bags (featuring the novel’s cover illustrations, by Manshen Lo) to celebrities, journalists and other so-called literary influencers. They have been encouraged to post about the book using the hashtag #BWWAY.

Lena Dunham, Maggie Rogers and Lucy Dacus are among those who shared photos of the book and its promotional swag on social media. Sarah Jessica Parker was photographed reading it between takes for the “Sex and the City” reboot. In an interview, Delia Cai, a correspondent at Vanity Fair, called it “the status galley of the summer.”

For some publishing professionals, FSG’s mailings have been humbling. Laura Marsh, The New Republic’s literary editor, noted on Twitter that she did not receive the tote or the hat. Lisa Lucas, the publisher of the Knopf imprints Pantheon and Schocken, tweeted that she was “cool enough for a tote bag but not a bucket hat.” (As a disclosure, I did receive a tote, but also not a bucket hat.)

Meanwhile, Hollywood executives can’t even get their hands on the seemingly ubiquitous advance copies. “At the moment, Sally’s reps are keeping the galleys at bay,” said Jordan Helman, the head of scripted content at Hulu, which distributed the TV adaptation of “Normal People” in the United States.

For those who missed out on the early push, there will be plenty of swag to collect on Tuesday, when the title is released. Bookstores in the United Kingdom plan to open early and distribute T-shirts, plus even more tote bags. A Sally Rooney umbrella is coming (for those moments when you’re moved to ask, “Beautiful weather, where are you?”). The week of Sept. 13, independent bookstores around the U.S. will be giving away promotional items, and, in New York City, a “Beautiful World, Where Are You”-branded truck will also serve coffee.

Emily Temple, the managing editor of Literary Hub, described the ongoing Rooney-mania as nearly “unprecedented” for a literary fiction release. To her, it calls to mind “Ferrante Fever” — the obsession with the pseudonymous author Elena Ferrante, whose Neapolitan Novels, beginning with “My Brilliant Friend,” made her an international celebrity.

Sheila O’Shea, FSG’s director of publicity and marketing, stressed that the outsize campaign for “Beautiful World, Where Are You” is about celebrating the author’s existing readership and “bringing Sally Rooney to people who are still to discover Sally Rooney.” In other words, it relies on influential people Instagramming their merch and recruiting new readers through their small screens.

Some recipients have noted the irony of the promotional blitz, given Ms. Rooney’s expressed Marxist values. “There’s this weird sense of, in carrying it around, you’re fulfilling its capitalist purpose,” Ms. Cai said of the tote bag. “If you care so much about Sally Rooney, you’d have to be skeptical of that, or at least aware of it.”

“Beautiful World, Where Are You,” like Ms. Rooney’s first two novels, features brilliant 20-somethings who spend as much time thinking about climate change and the ethics of procreation as they do their love affairs.

“Despite being very passionate about certain things, her characters are nonetheless able to see the irony in things and live with contradiction in their lives,” said Mitzi Angel, FSG’s publisher and Ms. Rooney’s longtime editor. “That’s one of the best things about her work.”

One of the book’s central characters is also a writer of realistic fiction, grappling with the anxieties of overnight fame.

“The great irony,” Maris Kreizman, the host of “The Maris Review” podcast, said of the novel’s rollout, “is that Sally Rooney has written a book about this author character who is coming to terms with how a young, attractive author is being marketed.” (Ms. Dacus, whose own profile is rising, could relate to that plotline. “I honestly don’t wish notoriety on anybody,” the musician said by phone.)

Despite the press and acclaim that has surrounded Ms. Rooney’s writing, she has not yet approached a blockbuster level of cultural awareness. “Just because something is popular in our feed does not mean it’s popular in the world,” said Karah Preiss, a founder, with the actress Emma Roberts, of the online book club Belletrist.

“If you go up to anyone on the street, anywhere, and ask them what Harry Potter is, they know what it is,” she continued. “If you ask them who Sally Rooney is, they’ll be like, ‘I don’t know, did you go to school with her?’”

For those who do know, the yellow bucket hat could someday be a cultural artifact. “In 20 years,” Ms. Temple said, “the coolest girl at some small college in Vermont is going to find it at a thrift store and wear it to the envy of all.”