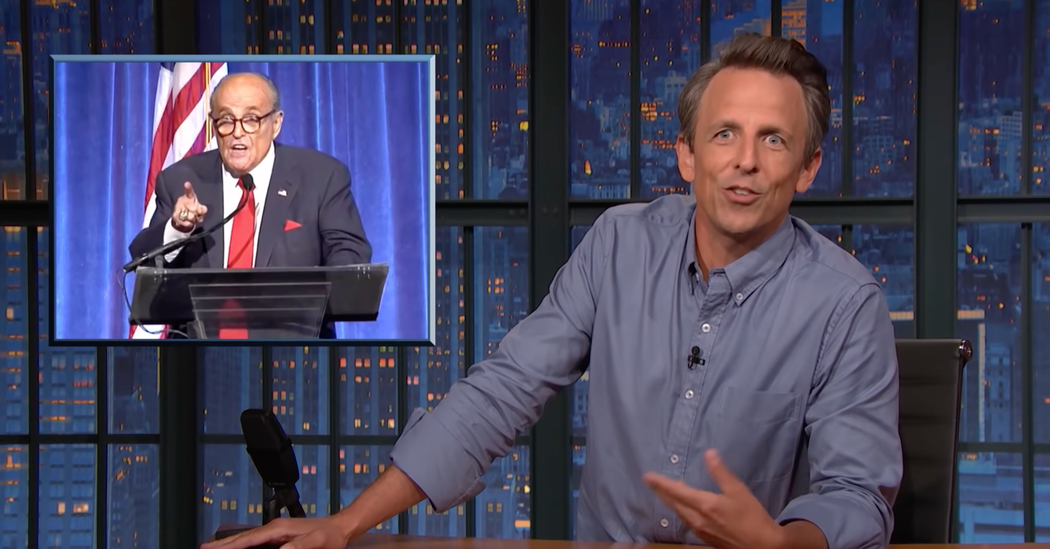 This weekend’s 20th anniversary of the Sept. 11 attacks would not appear to be very good fodder for lighthearted late-night humor. But that was until Rudy Giuliani got involved.

On Saturday, Giuliani turned a speech commemorating the occasion into a wandering, unfunny but still-comic monologue. He impersonated Queen Elizabeth II and reminisced awkwardly about his run-ins with Prince Andrew.

Trevor Noah was one of many late-night hosts who responded with baffled amusement.

“You know your speech went off the rails when people watching it are like: ‘I wish this guy would talk more about 9/11. What is he doing?’” — TREVOR NOAH

On “Late Night,” Seth Meyers said there was reason to agree with the commentators who suggested that Giuliani was not in full command of his faculties.

“I’m not saying Rudy was drunk, but that’s usually when guys from Brooklyn start to imitate the queen of England.” — SETH MEYERS

“I guess Rudy can add this tape to his reel of impressions if he ever auditions for ‘America’s Not Talent.’” — SETH MEYERS

Taco Bell recently started a program that aims to help customers recycle the plastic from used sauce packets by having them mail those packets back.

Noah said the idea deserved points for creativity but probably wouldn’t actually do much to help the environment.

“This idea has all sorts of problems with it. For one thing, people who eat at Taco Bell don’t care about the environment. I mean, they don’t even care about their own bodies.” — TREVOR NOAH

“Yeah, this is a weird idea, but what did you expect? Coming up with weird ideas is Taco Bell’s whole thing. This is a place that will still wrap a soft shell around a hard shell and wrap that inside a Dorito’s chip — which is delicious, but you really think their idea to save the environment is going to make sense?” — TREVOR NOAH

“At the Washington Football Team’s season opener, a pipe at the stadium burst over a group of fans, and some people said it might have been sewage. I don’t know; take a look. [Shows footage] Well, that’s a good omen for the season, you know? Washington is still looking for a team name; it’s too bad the Browns are already taken.” — JIMMY FALLON

“An investigation concluded last week that a recent M.T.A. subway outage that shut down 83 trains was caused by someone accidentally flipping a power switch. Said one man, ‘So thaaaat’s what it does.’” — SETH MEYERS

Dr. Anthony Fauci talked to Noah about combating vaccine hesitancy and what he called the need for vaccine mandates.

Jimmy Kimmel’s wife, Molly McNearney, came up with a skit that allows her to declutter their house at the same time: It’s called “Win Jimmy’s Crap.”

What We’re Excited About on Tuesday Night

Justice Stephen Breyer, who at 83 has been fending off calls from fellow liberals to step down, will talk to Stephen Colbert on Tuesday. Will Colbert hold his feet to the fire?

Anthony Tommasini, The Times’s chief classical music critic, gave an enthusiastic review to the first performance at the Metropolitan Opera since the start of the coronavirus pandemic: a staging on Saturday of Verdi’s Requiem in commemoration of 9/11.