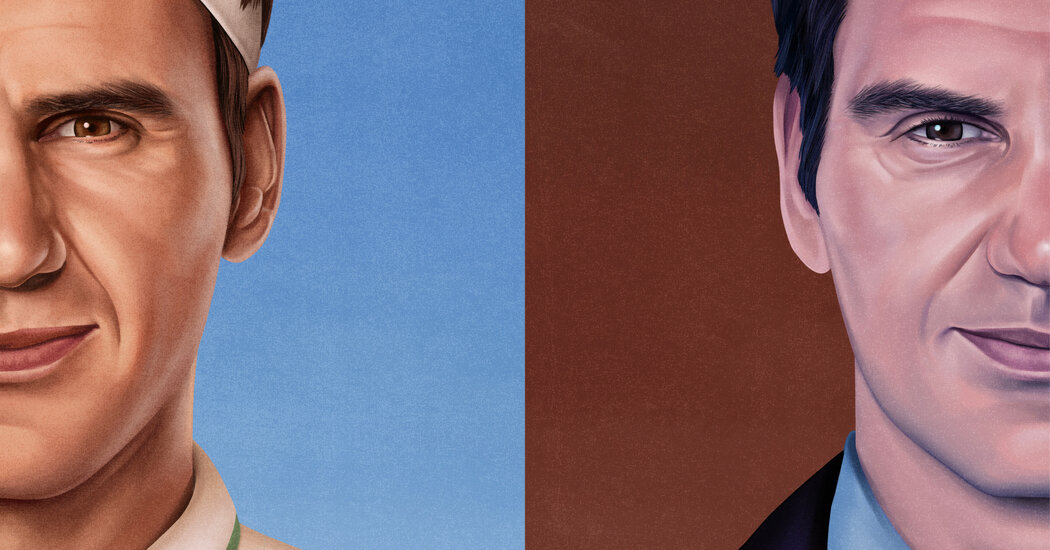 Mike Nakajima, who was a director of tennis at Nike, remembered Federer coming one year to the company’s headquarters in Beaverton, Ore., for shoe testing at Nike’s research lab. They walked out of the building and were headed for their next meeting when Federer stopped in his tracks and said, “I’ve got to go back.” Nakajima asked him if he had forgotten something, and Federer said he had forgotten to thank the people who helped him with the shoes. “So we ran back into the building, downstairs, through security so he could say thanks,” Nakajima said. “Now what athlete does that?”

The French have a fine expression that applies to Federer: ‘joindre l’utile à l’agréable,’ which translates loosely as ‘combining business with pleasure.’

Federer was at Nike headquarters for “Roger Federer Day,” in which all the buildings on the sprawling campus were temporarily renamed for him. But Nakajima said the day was not simply a celebration of Federer’s achievements. Federer, often up for a prank, agreed to play a few on Nike’s employees. They brought the advertising team together to watch a new advertisement. Federer surprised them by wheeling a cart around the room and serving coffee and doughnuts. At the company gym, he sat behind the front desk and handed out towels to the employees. At the company cafeteria, Federer did a shift as a cashier and then as a barista. “Of course, he didn’t know how to make coffee, so what he ended up doing was he just went around, going table to table, saying, ‘Hello, my name is Roger Federer, nice to meet you,’ as if people didn’t know who he was,” Nakajima said. “You think you could get Maria Sharapova to do that? No way. And Roger did that with a smile on his face, and then he played Wii tennis with anybody who wanted to play with him.”

Andy Roddick told me that Federer came to Austin, Texas, in 2018 as a personal favor to help him with an event for his charitable foundation, which funds educational programs and activities for lower-income youths. “I pick him up at the airport, we’re driving in, and he’s like, ‘OK, what’s the run of show?’” Roddick said. “And Roger said: ‘Be very specific about what you guys do. I don’t just want to say you help kids, because that’s lazy.’ And then he goes, ‘OK, how can I add the most value to you all today?’ There wasn’t a conversation about ‘What time will I be able to leave? How much time do I have to spend?’”

When they arrived at the event, Roddick expected that he would have to be Federer’s escort, introducing him to guests and donors. But Federer acted as if he’d been preparing for the event for weeks. “He breaks away from me and literally goes up to the first two people he sees, introduces himself and works the room by himself, with no agent, no manager running interference,” Roddick said. “I watched him do it for an hour, straight into a room full of strangers and just engaging with people. One of our board members has twins, and they are talking about twins. He’s able to find the parallels and the common ground. I was really impressed by that. The person who needs to do that the least is the best at it. We finished the event, and his plane was delayed, and he walked back into the donor room and started going again. He didn’t get out of Austin until 1 or 2 in the morning, and if he was pissed, no one would have known.”

I asked Roddick how unusual that sort of approach was compared with other elite athletes. “The thing I’m most jealous of is not the skill and not the titles — it’s the ease of operation with which Roger exists,” Roddick said. “There are people who are as great as Roger in different sports, but there’s no chance that Jordan or Tiger had the ease of operation Roger has day to day.”

Mirka, whom Federer calls his “rock,” has been the key figure in his ability to navigate between his public and private spheres. She has taken on plenty through the years, including bearing and raising two sets of identical twins. Mirka and Roger’s daughters, Charlene and Myla, were born on July 23, 2009, and the family boarded a private jet for Montreal and the Canadian Open three days after Mirka and the newborns checked out of the hospital in Zurich. Their sons, Leo and Lennart, were born on May 6, 2014, leaving just enough time for Roger to make it to the Italian Open. Family logistics have sometimes been daunting — a rotating cast of nannies and a traveling tutor have certainly smoothed some of the bumps — but Mirka’s goal was to turn the road into a home, in part so her husband could play on with peace of mind. “I wasn’t sure if that was what I really wanted for the kids at the beginning, but I must say it keeps us together,” Federer told me in 2015.