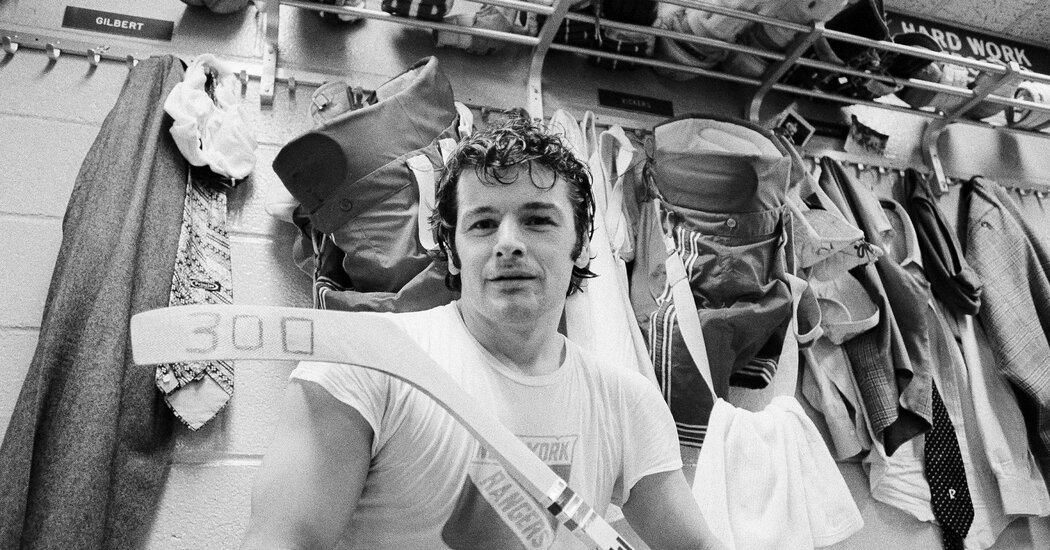 Rod Gilbert, a quicksilver Hall of Fame forward for the New York Rangers who more than 40 years after his career ended remains the team’s leading scorer, died on Thursday at his home in Manhattan. He was 80.

His wife, Judy Gilbert, confirmed the death on Sunday but did not cite a cause.

Gilbert (pronounced zhil-BEHR) spent his entire career with the Rangers, scoring 1,021 points, including 406 goals, which are still the most in team history, and recording 615 assists, a feat eventually surpassed by Brian Leetch, who has 741.

“He was a tremendous player, with a wicked slap shot,” Marv Albert, who called Rangers games on radio, said by phone. “And he was one of the most popular athletes in New York sports history.”

That popularity extended long after his career had ended. Holding community relations and other positions with the Rangers and its parent, Madison Square Garden, he would eagerly greet fans at the arena and, with his French Canadian accent, regale them with stories of his playing days.

“Family, that’s what being at the Garden and being a Ranger means to me,” he told The New York Times in 2017. “Plus, there are still a few Ranger fans I haven’t met, so I have to keep coming back.”

Gilbert’s greatest season was 1971-72, when, at 5-foot-9, he was part of what was called the Goal-a-Game line. (They averaged more than a goal a game while playing together.) Gilbert scored 43 goals, the smooth center Jean Ratelle had 46, and the rugged left wing Vic Hadfield had 50. They helped lead the Rangers to the Stanley Cup finals but lost in six games to Bobby Orr’s Boston Bruins.

After the 3-0 loss that ended the series, an upset Gilbert suggested that he might retire.

“For 10 years, we’ve been saying it like the Brooklyn Dodgers, ‘Wait till next year,’” he told The Daily News. “I’m not going to say it this time. This could be it for me.”

His frustration abated, however, and he played five more full seasons, none of which took the Rangers to the finals again. He was released in 1977 by John Ferguson, the Rangers’ general manager and a former opponent as a member of the Montreal Canadiens. Gilbert had scored only two goals in 19 games.

Gilbert disagreed with the team’s decision, believing that he could still play well and that he was worth his $200,000 annual salary (about $935,000 in today’s money). “I believe that I am in top playing condition and am playing well,” he said in a statement.

He was 36 by then and reluctantly agreed to retire and not accept offers from other teams to keep playing. He took a front-office job with the Rangers.

“I feel a little lost, even insecure, but looking forward to my new challenges,” he said at a news conference at an East Side restaurant in Manhattan.

In 1980 he was hired to coach the Rangers’ minor league affiliate, the New Haven Nighthawks of the American Hockey League. But that job lasted only one (losing) season: after it concluded, the Rangers ended their affiliation with the team, and Craig Patrick, the Rangers’ G.M., told him that he was no longer wanted in the organization.

“My future isn’t with New York, not with Patrick there and Herb Brooks there,” Gilbert said at the time (Brooks was about to take over as coach of the Rangers). “It’s not the end of the world.”

Rodrique Gabriel Gilbert was born on July 1, 1941, in Montreal to Gabriel and Alma Gilbert. His father was a blacksmith, his mother a homemaker. He grew up a Canadiens fan and particularly admired one of their stars, Bernard (Boom Boom) Geoffrion, because he shot right-handed, like Gilbert.

Gilbert started playing junior hockey in 1957 for the Guelph Biltmores in Ontario, but during the 1959-60 season he needed spinal fusion after an accident on the ice. “Some people threw debris on the ice and I slipped on something and fell into the boards,” he told The Hockey Writers, a website.

He played one game for the Rangers in each of the 1960-61 and 1961-62 seasons, spending most of the first season in junior hockey and the second with a minor league team. He became a regular in 1962-63, joining a team that included veterans like Andy Bathgate and Harry Howell and younger players like Ratelle and Hadfield.

In 1966, partway though his fourth full season, Gilbert required a second spinal fusion operation after the bone graft from the first one broke. He returned the next season.

By then he was on his way to being one of the best-known athletes in New York — Mr. Ranger — joining the likes of Mickey Mantle, Tom Seaver, Joe Namath and Walt Frazier as sports idols in the city.

“As a bachelor, he swung through the East Side bistros as the only real New York Ranger,” the columnist Dave Anderson wrote in The Times in 1977, and later, as a married man, moved through the social scene “with the charm and class of a boulevardier.”

Gilbert played in eight N.H.L. All-Star Games, and in 1976 received the Bill Masterton Memorial Trophy, which exemplifies perseverance and sportsmanship.

After his forced retirement and acceptance of a front-office job with the Rangers, his No. 7 was retired in 1979. But after his minor-league coaching stint, he spent about eight years apart from the organization. He owned a restaurant in Manhattan, Rod Gilbert Cafe du Sport, and worked as a stockbroker.

He rejoined the Rangers in 1989, hired as a director of special projects and community relations representative — roles that turned this gregarious former player into a team ambassador for the last 32 years of his life. He was also president of the team’s alumni association and worked with the Garden of Dreams Foundation, a charity for children.

In addition to his wife, Judith (Christy) Gilbert, he is survived by his daughters, Chantal, Holly and Brooke; his son, Justin; seven grandchildren; and his brothers, Jean Marie and Andre.

While Gilbert’s only Stanley Cup final ended in disappointment, he was in the Garden when the Rangers won it all against Vancouver in 1994.

“That was the greatest experience, a culmination for me, too,” he told The Times in 2017. “The fans have always had so much passion and compassion for the team. When they were finally rewarded, it was really something to cheer about.”