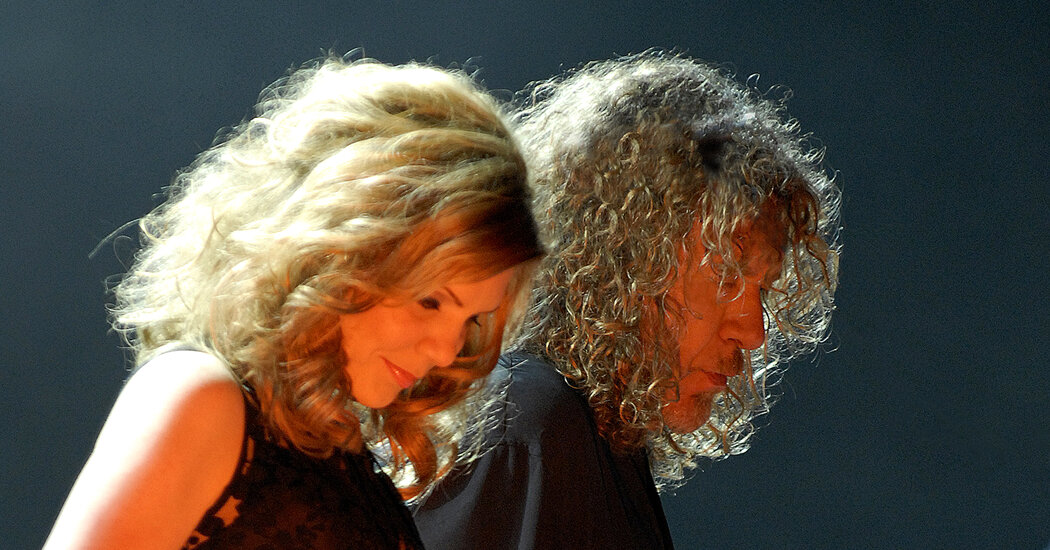 Robert Plant, Alison Krauss and the guitarist and producer T Bone Burnett, who released “Raising Sand” in 2007, have joined forces again for an album due in the fall called “Raise the Roof.” They’ve turned Lucinda Williams’s “Can’t Let Go” into a rockabilly rumba, singing close harmony and sharing the spotlight with a twangy lead guitar. The lyrics are about heartbreak and loneliness, but the performance flaunts camaraderie. JON PARELES

No slow burn here: The English roots-rocker Jade Bird vents against every man who “takes me for a fool,” flailing at her acoustic guitar and quickly summoning a full electric band, counterattacking both her own past naïveté and everyone who’s ever exploited it. PARELES

Ladyhawke, ‘Think About You’

The New Zealand musician Pip Brown has been releasing music as Ladyhawke since 2008, but the light, infectious “Think About You” proves she’s still got some fresh ideas up her sleeve. Buoyed by a disco-pop bass line and a Bowie-esque riff, the song is a dreamy ode to the timeless feeling of being crush-struck: “Try as I may I can’t seem to shake away this crazy feeling inside.” Don’t overthink it, commands the song’s breezy vibe. LINDSAY ZOLADZ

Ten years ago, the British pop singer Katy B released her effervescent debut album “On a Mission,” which helped usher in an era of sleek dance-floor reveries from kindred spirits like Disclosure and Jessie Ware. She’s been relatively quiet for the past half decade, returning with a sultry mid-tempo affair that retains her voice’s soulful grit. “The beginning of the end, the moment that I let you in,” she sings, the ruefulness of this realization balanced out by her charismatic sass. ZOLADZ

Brandee Younger, ‘Spirit U Will’

In a group setting, the harp can seem a separate element, becoming something like the air around an ensemble sound — proof of a higher atmosphere, or simply a foil. In Brandee Younger’s hands, and in the pieces that she writes and performs, the harp is something different: It’s the scaffolding, the very bones of the larger sound. On “Spirit U Will,” from her just-released Impulse! debut, “Somewhere Different,” Younger and the bassist Dezron Douglas build the foundation of a bobbing, West African-indebted beat, stenciled out by the drummer Allan Mednard’s muffled snare patterns and given lift by the soaring trumpet of Maurice Brown. GIOVANNI RUSSONELLO

Here’s a natural alliance: two boisterous performers who know that all attention — admiring or disapproving, prurient or censorious — pays off. “All the rumors are true,” Lizzo boasts, stifling a giggle, as a cowbell thumps and horns punch a riff; Cardi B revels in her international fame — “They lie in a language I can’t even read” — and vows, “Last time I got freaky the FCC sued me/But I’mma keep doing what I’m gonna do.” Together they share the last laughs. PARELES

Nas collaborated with Lauryn Hill (before she added the Ms.) 25 years ago on “If I Ruled the World (Imagine That).” Their reunion, from the new Nas album “King’s Disease II,” cruises on a mid-tempo beat and easygoing electric-piano chords. It’s an elder-generation complaint. Nas longs for privacy and recalls an era “Before the internet energy and social decline/Destroyed the vibe, foolin’ us with the headlines, keepin’ us blind.” Ms. Lauryn Hill bats away old complaints about her long absences from performing and her lack of careerism: “Now let me give it to you balanced and with clarity/I don’t need to turn myself into a parody.” They’re not defensive; they’re calmly proficient. PARELES

Death and paranoia loom in multimillion-streaming hip-hop tracks like “Before I Go.” Two sing-rappers, Kodak Black and Rod Wave, trade verses over descending minor chords, hollow drum-machine beats and a quavery repeating keyboard line. Kodak Black confesses to problems, says he still listens to his mother and wonders, “I don’t know why but they be plotting to kill me.” Rod Wave details his safeguards but expects the worst. Neither one counts on a happy ending, even if Kodak insists, “Everybody gonna die before I go.” PARELES

Machine Gun Kelly delivers the verses of his gloriously pummeling “Papercuts” in a classic pop-punk drawl, and the towering, crunchy guitars recall the heyday of ’90s alternative rock. (The distorted chords almost sound like a direct homage to Green Day’s “Brain Stew.”) The first single from his upcoming sixth album, “Born With Horns,” continues in the straight-ahead rock lane that suited him well on last year’s “Tickets to My Downfall,” and it arrives with a surreal music video directed by Cole Bennett. The clip features MGK strutting down the streets of Los Angeles in sequined pants and a tattooed bald cap, cutting a silhouette that’s a little bit Ziggy Stardust, a little bit Kurt Cobain. ZOLADZ

There’s a warm, feral energy to “Little Things,” the A-side of a new single from the Brooklyn folk-rockers Big Thief. Adrianne Lenker murmurs a string of nervous, vulnerable confessions — “Maybe I’m a little obsessed, maybe you do use me” — but the rest of her band creates a textured, woolly atmosphere that swaddles her like a blanket. By the middle of their rootsy jam session, she’s feeling both frustrated and free enough to let loose a cathartic primal scream. ZOLADZ

The PRISM Quartet is four saxophonists, anchored in Western classical, whose catholic interests have brought them into contact with European experimental composers, Afro-Latin innovators and jazz improvisers. On the group’s new album, “Heritage/Evolution, Volume 2,” the quartet is joined by Chris Potter, Ravi Coltrane and Joe Lovano, three of the leading saxophonists in jazz, each of whom contributes original material. Potter wrote his “Improvisations” suite by capturing himself extemporizing on saxophone, then turning some of those improvisations into a layered composition. Partway through the suite, on “Interlude 2,” he (on tenor sax) and Coltrane (on soprano) tangle and nip at each other, while the PRISM Quartet tunnels into a syncopated groove, not unlike something the World Saxophone Quartet might’ve played in the 1980s. RUSSONELLO