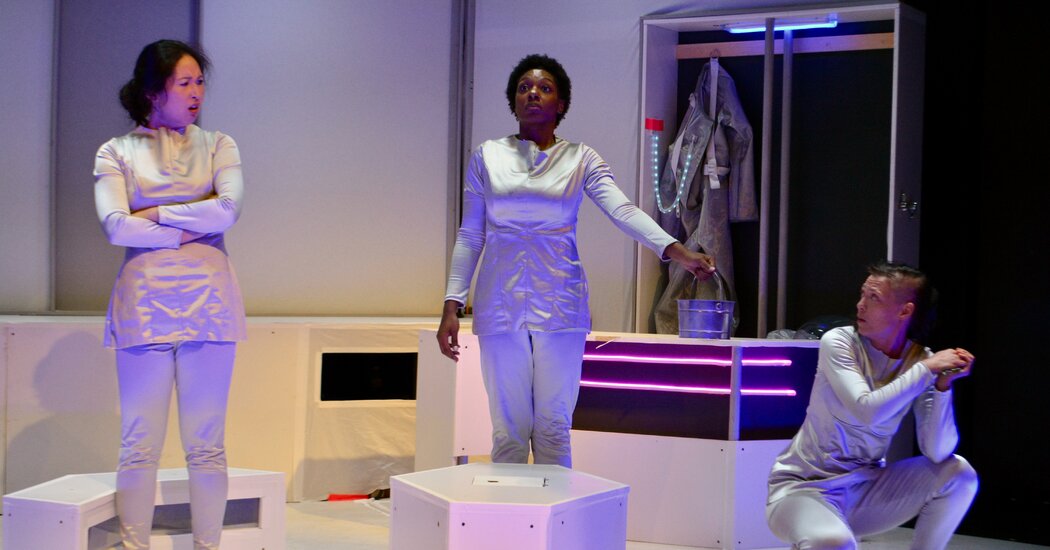 Inside their white-walled home on the surface of a hostile planet, Alma and Baya have only each other for company.

They are grown women in a worsening crisis, rationing their food and unable to go outdoors, yet their utilitarian pod has the coziness of a permanent slumber party. Alma is bossy, Baya is ebullient, and somehow they are comfy together.

Then a shadow appears outside: a stranger, who will die without their help.

“Should we let it in?” Baya asks, softhearted and curious.

“Are you insane?” Alma says.

“All the more reason why not,” Alma says.

Edward Einhorn’s prismatic new sci-fi play “Alma Baya,” at A.R.T./New York, can be viewed as a metaphor for any number of current catastrophes, the pandemic and climate change among them. But when I saw it the other night, hours after Afghanistan fell to the Taliban, as the news filled with images of desperate people thronging the Kabul airport in hope of escape, that was the disaster foremost in my mind.

“It could be you,” Baya tells Alma, as the stranger knocks. “In another circumstance.”

“But it’s not,” Alma says, dismissively.

Beyond each other, Alma and Baya have never known another human being. They are variants — more in the “Loki” sense than the coronavirus sense, but feel free to choose your metaphor — whose lives on their airless planet are an experiment in survival for the benefit of the faraway society that placed them there, in their pod, with instruction manuals that tell them how to live.

Directed by Einhorn for his Untitled Theater Company #61, and performed with two alternating casts as a pandemic precaution (I saw the occasionally underpolished Cast A), “Alma Baya” is the bleak, humor-flecked tale of what happens when Baya lets the stranger in.

It’s a furtive, middle-of-the-night move, but it’s hopeful, too — because what if this wild-haired woman, rasping for a drink of water, can help them survive?

She is, after all, wearing exactly the kind of oxygenated suit that Alma (Ann Marie Yoo) and Baya (Sheleah Harris, the cast’s winsome standout) will need if they are ever to go outside again and tend their crops, which they abandoned months ago when their own suits broke. And the stranger (Rivera Reese) claims to have a green thumb.

There is a sense of playfulness to that bubbleheaded suit (costumes are by Ramona Ponce), but Mike Mroch’s set looks considerably cheaper in person than it does in photos, even under flattering lighting by Federico Restrepo. This production is also available on demand, though, and I wonder if the scenic design is tailored more to the cameras than to the eyes in the room.

Alma and Baya, in their little pod, live according to the dictates of their sacred books, the instruction manuals — though they have confidently, comically misinterpreted a significant piece of advice contained therein. Grimmer is their assumption, challenged by the stranger, that everyone gets the same operating instructions, and that cruelty is OK if you can find a line of text that tells you so.

“Alma Baya,” then, is a sci-fi meditation, set in a world plagued by human problems that eternally replicate — because survival is a brutal business, and selfishness is one of our dominant traits.