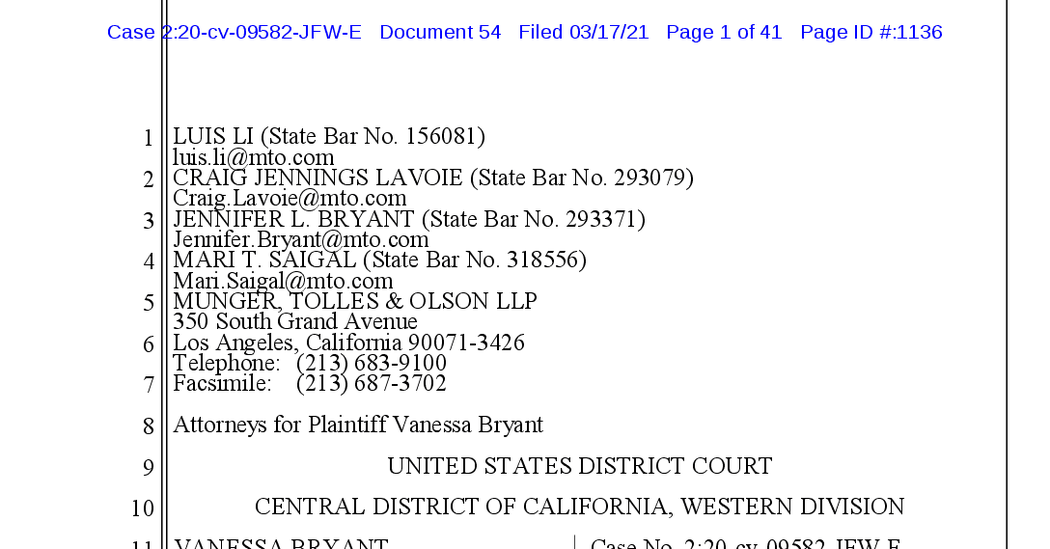 Plaintiff Vanessa Bryant (“Plaintiff”), through her undersigned counsel, hereby brings this action against defendants County of Los Angeles (the “County”), the Los Angeles County Sheriff’s Department (the “Sheriff’s Department”), the Los Angeles County Fire Department (the “Fire Department,” and, collectively with the County and the Sheriff’s Department, the “Entity Defendants”), Joey Cruz, Rafael Mejia, Michael Russell, and Raul Versales (collectively, the “Deputy Defendants,” and, collectively with the County, the Sheriff’s Department, and the Fire Department, the “Defendants”) seeking damages to remedy violations of rights under the United States Constitution and for negligence and invasion of privacy pursuant to California law. This Court has subject matter jurisdiction pursuant to 28 U.S.C. sections 1331 and 1343. Plaintiff alleges, on personal knowledge as to herself and information and belief as to others, as follows: INTRODUCTION 1. On the morning of Sunday, January 26, 2020, three eighth-grade girls, joined by parents and coaches, left their homes in Orange County to play in a youth basketball tournament in Thousand Oaks. Making their way by helicopter, they encountered dense fog. Rather than land or turn around, the pilot pushed into the fog and became disoriented. The helicopter descended rapidly and crashed into the foothills of the Santa Monica Mountains, killing everyone onboard. Vanessa Bryant’s thirteen year-old daughter, Gianna Bryant, and husband of nearly twenty years, Kobe Bryant, were among those who died. 2. In the aftermath of the crash, several of the victims’ family members gathered at the L.A. County Sheriff’s station in Lost Hills, devastated and distraught. Sheriff Alex Villanueva met with them and assured Mrs. Bryant that his deputies were securing the crash site. Based on a leak by law enforcement, the gossip and celebrity news site TMZ had reported that Kobe, a singular figure in