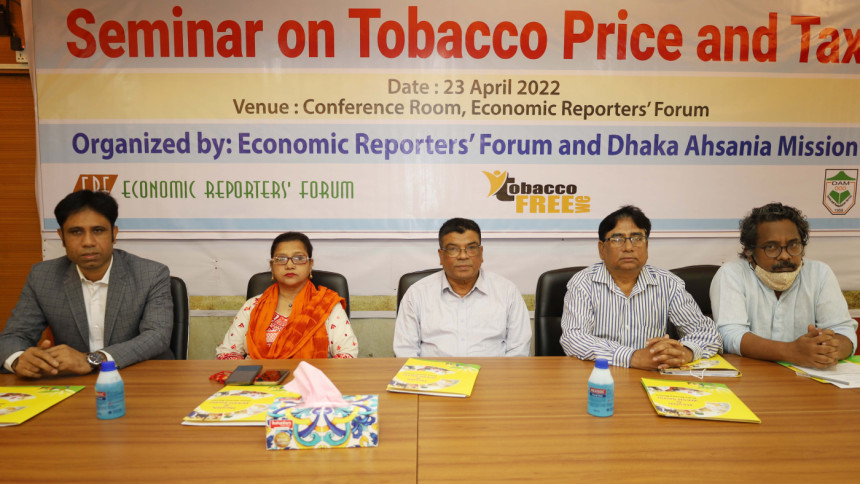 The price of cigarettes at the lower tier should be raised to boost revenue generation for the government as well as to minimise the health risks, speakers said at a seminar today.

Dhaka Ahsania Mission and the Economic Reporters’ Forum (ERF) organised the seminar titled “Tobacco Price and Tax” at the ERF auditorium in Dhaka.

Speaking at the seminar, they said although the share of the lower-tier cigarettes is almost 75 per cent of the whole industry, its price remained unchanged over the last two years. As a result, the number of smokers at this level is not declining, they said.

They also said the price of cigarettes should be increased considering the rise in per capita income and inflation.

There is no alternative to raise the price of tobacco products to turn Bangladesh into a tobacco-free country by 2041 as announced earlier by Prime Minister Sheikh Hasina, they added.

While presenting the key-note paper, Abdullah Nadvy, director (research) of Unnayan Shamannay, said that the current duty structure of cigarettes is complex and it should be more simplified.

Besides, Nadvy suggested raising the price of cigarettes at the high tier specifically.

“If this proposal is implemented, the revenue of the government will be boosted while the number of smokers will be reduced by 13 lakh. Besides, some 9 lakh youths will be discouraged to continue smoking,” he added.

Dhaka Ahsania Mission Deputy Director Mokhlesur Rahman said that the government has already announced to turn Bangladesh into a smoking free country by 2041 and to materialise this, there is no alternative for raising the duty on cigarettes and tobacco products.

CTFK Grants manager Abdus Salama Mia said that it is very much necessary to control the use of tobacco in turning Bangladesh into a developed country. “This will not only help alleviate poverty but also reduce the cost of the government in addressing the tobacco-related diseases.”

ERF General Secretary SM Rashidul Islam said that the government is in dilemma over tobacco as it wants to control tobacco on one hand, and the government also depends on tobacco products for boosting revenue on the other hand.