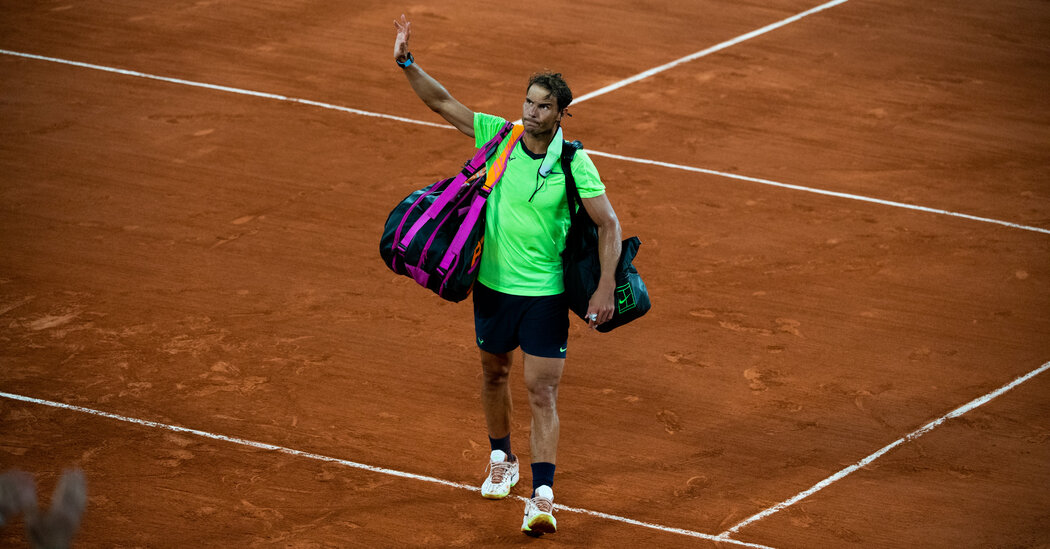 This is no attempt to rush anybody off the court or out the door. Athletes have every right to practice their craft for as long as they are able, to pursue the finish they desire.

But it certainly felt like the end of an era this week as Roger Federer and then Rafael Nadal withdrew from the U.S. Open and shut down their 2021 seasons.

The Big Three remains a catchy moniker, and will no doubt persist larger-than-life in memory, but the three-pronged dominance of Federer, Nadal and Novak Djokovic on the men’s game appears to be gone for good.

Federer may beat the long odds to return to the tour at age 40 after a fourth knee surgery. Nadal may find a way at age 35 to rid himself of the chronic left foot pain that led to his announcement on Friday that he would not play on tour again in 2021.

Novak Djokovic, still No. 1 by a large margin, may complete his Grand Slam by winning the U.S. Open and go on to win many more titles in the seasons ahead by holding off the younger set.

“Djoker is still the Big One at this stage, and I would not be surprised in 2022, if Nadal is healthy, that it’s still the Big Two,” said Brad Gilbert, the longtime coach and ESPN analyst.

But the Big Three has surely now run its course, and it has been a phenomenally long run. They finished in the top three in the year-end rankings for the first time in 2007, with Federer at one, Nadal at two and Djokovic at three.

At the end of 2019, they were still there, shifting places slightly, with Nadal at one, Djokovic at two and Federer at three.

There is no precedent for this in men’s tennis. Other stars did join their lead pack but fell away: players like Andy Murray and Stan Wawrinka, who each won three Grand Slam singles titles.

But the Big Three were near constants, faltering at times because of injury or, much more rarely, because of flagging inspiration, only to rise again.

“They are without a doubt the best three men’s players of the Open era,” Gilbert said. “And it’s crazy that they all played at the same time.”

Competition among themselves has lifted each man higher than he might have soared on his own.

But they will not play in New York at the same time this year. Only Djokovic is still in the draw, and he does not plan to compete ahead of the U.S. Open: working his way through a shoulder problem, accumulated fatigue and Olympic regrets after surprisingly failing to win a medal in Tokyo.

Neither Federer nor Nadal participated in those Games, but they were still unable to get healthy for the U.S. Open. It is the only Grand Slam tournament where Federer and Nadal have not faced each other during their long and floodlit rivalry. It appears it will stay that way.

Neither has played in New York since 2019, when Nadal held off new arrival Daniil Medvedev in a five-set final that was a test of will, endurance and tactical acumen.

When Nadal finally prevailed, he ended up in tears — much rarer for him than for Federer — as he sat courtside and watched a commemorative video that honored each of his Grand Slam tournament victories.

But Nadal, a four-time U.S. Open champion, chose not to defend his title last year when the event was played without spectators and with significant restrictions because of the coronavirus pandemic. He wanted to save himself for the French Open, the tournament that has defined him and which had been postponed until after the U.S. Open.

His prioritizing paid off with a 13th French Open title, which was also his 20th Grand Slam singles title, tying him with Federer for the men’s record.

But he has not been able to hit a similarly high note in 2021, and on Friday he announced that he would miss the rest of the season because of the foot condition that first surfaced in his late teens and is troubling him anew.

“I have been suffering too much with my foot for the last year now,” the fourth-ranked Nadal said in a video posted on social media.

He played only 29 matches in 2021, his fewest since 2003. He won the Barcelona Open and Italian Open on clay but lost to Djokovic in the semifinals of the French Open in what certainly looks like the men’s match of the year even if it only required four sets.

Nadal’s foot bothered him in that match, and he skipped Wimbledon and the Olympics in an unsuccessful attempt to resolve it. He returned to action in Washington, D.C., this month, but his movement was clearly still affected by the injury as he defeated Jack Sock in his opening match and then lost to Lloyd Harris in the next round.

Nadal traveled to Toronto but withdrew from the Masters 1000 event there and returned home to Spain to weigh his options.

“I needed to talk with my family, with my team and with my doctors especially to understand what is going on,” Nadal said on Friday. “But the foot is not the proper way today and during the last year I was not able to practice and prepare myself the way I need to to be competitive at the standard I want to be. So we had to take that decision, but I am confident that I will recover myself 100 percent and I will be able to fight again for the most important things.”

Nadal’s left-foot condition first hampered his career during the 2004 season when he was 17, forcing him to miss much of the clay-court season. That delayed his debut at the French Open till 2005, when he won the first of his 13 titles at Roland Garros.

But in October 2005, he experienced more-intense foot pain during the Madrid Open, and doctors in Spain eventually determined that the problem was congenital, a small bone in his foot that was slightly deformed. Nadal has said doctors told him that he might not play professional tennis again. But at age 19, he found a way to reduce the stress on the bone with custom-made insoles and returned to action in 2006, winning five titles including the French Open.

“The injury is nothing new,” Nadal said on Friday. “It’s the same injury I am having since 2005. In that moment, the doctors were very negative about my future career, but honestly I was able to have a career that I never dreamed about, so I am confident I will recover again and if the foot is better I am content my tennis and mentality will be there again soon. You can be sure I am going to fight every single day to make that happen.”

But for now, only one member of the Big Three still has a chance to break the tie and fight for a 21st Grand Slam singles title in New York. For now and perhaps quite a bit longer, Djokovic plays on alone.