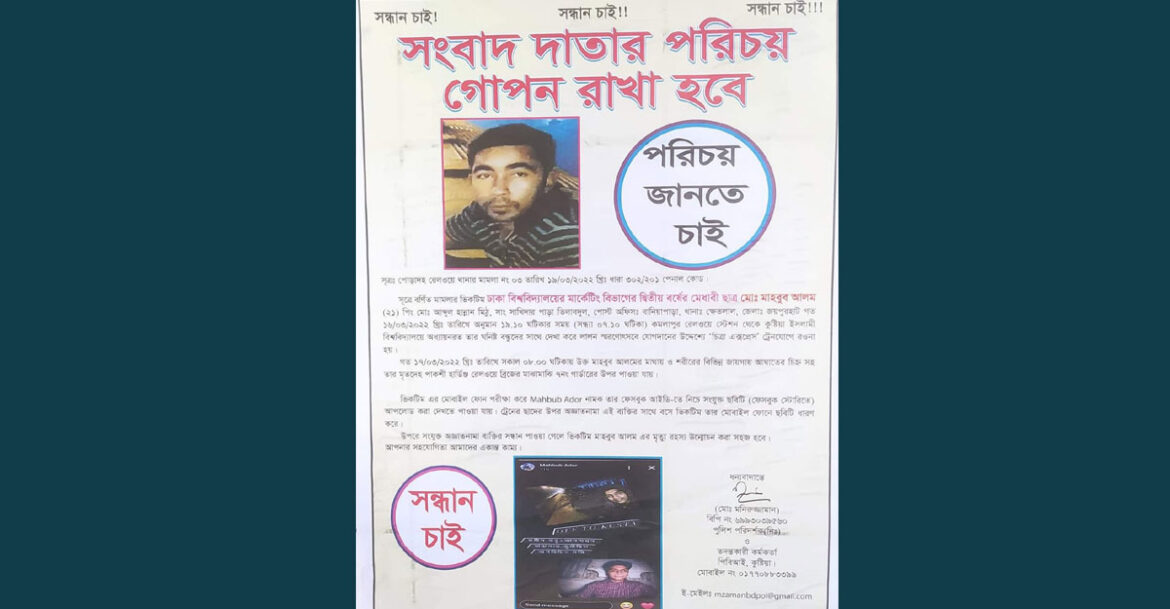 Posters have been put up to search for an unidentified person who was with Mahbub Alam, a student of Dhaka University (DU). Kushtia PBI inspector. Moniruzzaman has already put up 500 posters from Dhaka’s Kamalapur railway station to Alamdanga. He is the investigating officer in the murder case of DU student Mahbub Alam.

Monday (April 24) night Kushtia PBI inspector. Moniruzzaman told Dhaka Post that 500 posters have already been put up to search for an unidentified person who was with the slain DU student Mahbub. Three hundred more posters will be put up. Chitra Express trains stop at Dhaka’s Kamalapur Railway Station, Airport, Joydebpur, Tangail to Alamdanga. These posters have been put up in those stations. There are some more posters, they will be put up as far as Khulna.

He said the court has given some time for this investigation. If you are not able to submit the investigation report within this period, you will be given new time again. We are still trying to find the unknown person.

Incidentally, the body of Mahbub Alam, a second year student of Marketing Department of Dhaka University was recovered from under Hardinge Bridge in Kushtia on March 18 morning by Poradaha Railway Police. Mahbub Alam’s body was handed over to his family after an autopsy at Kushtia General Hospital on the same day.