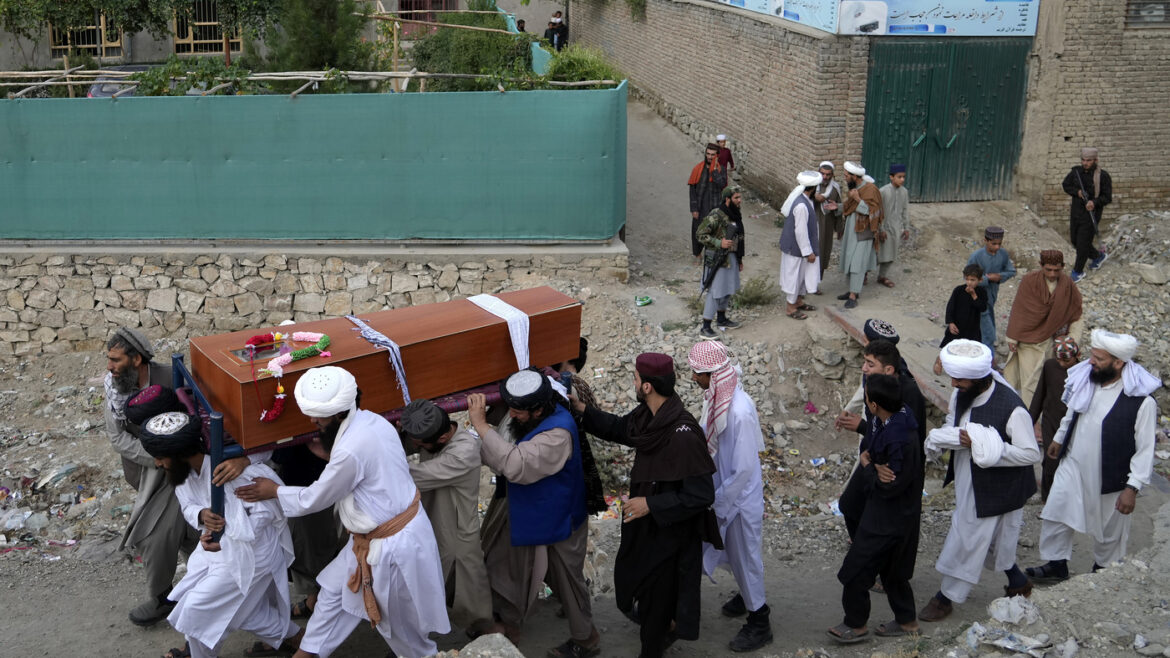 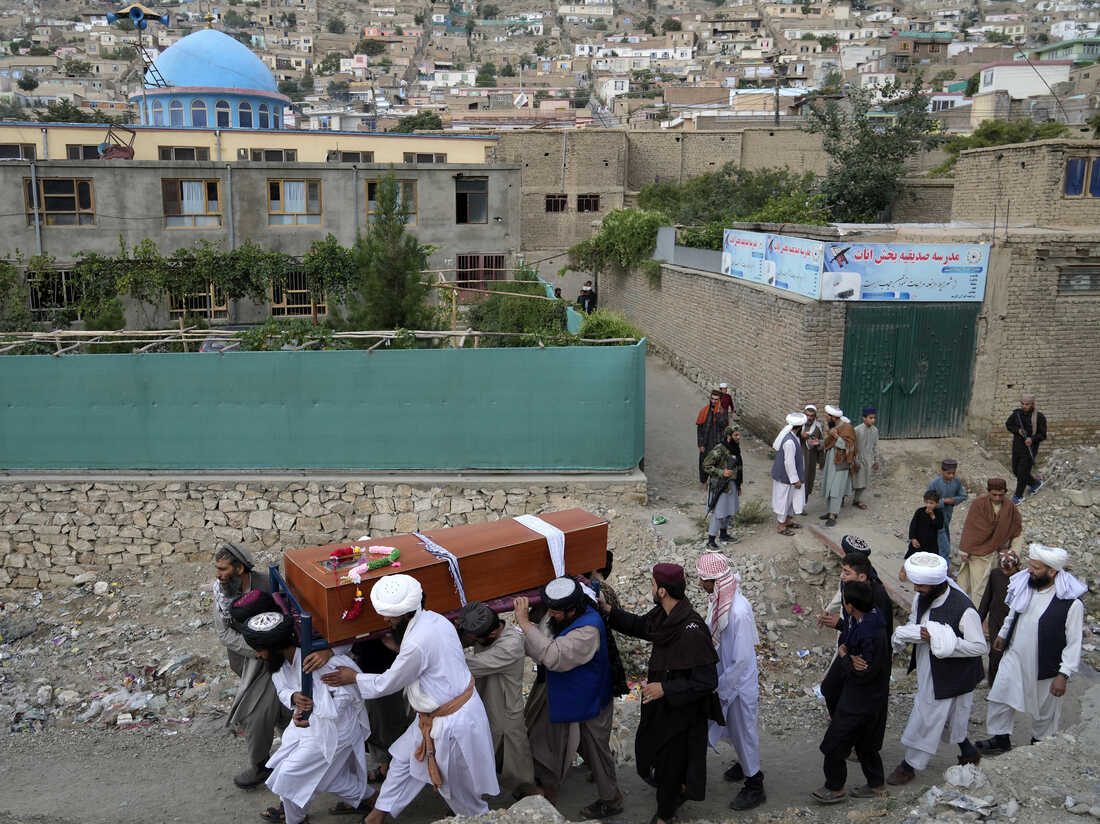 Mourners carry the body of a victim of a mosque bombing in Kabul, Afghanistan, Thursday, Aug. 18. 2022. 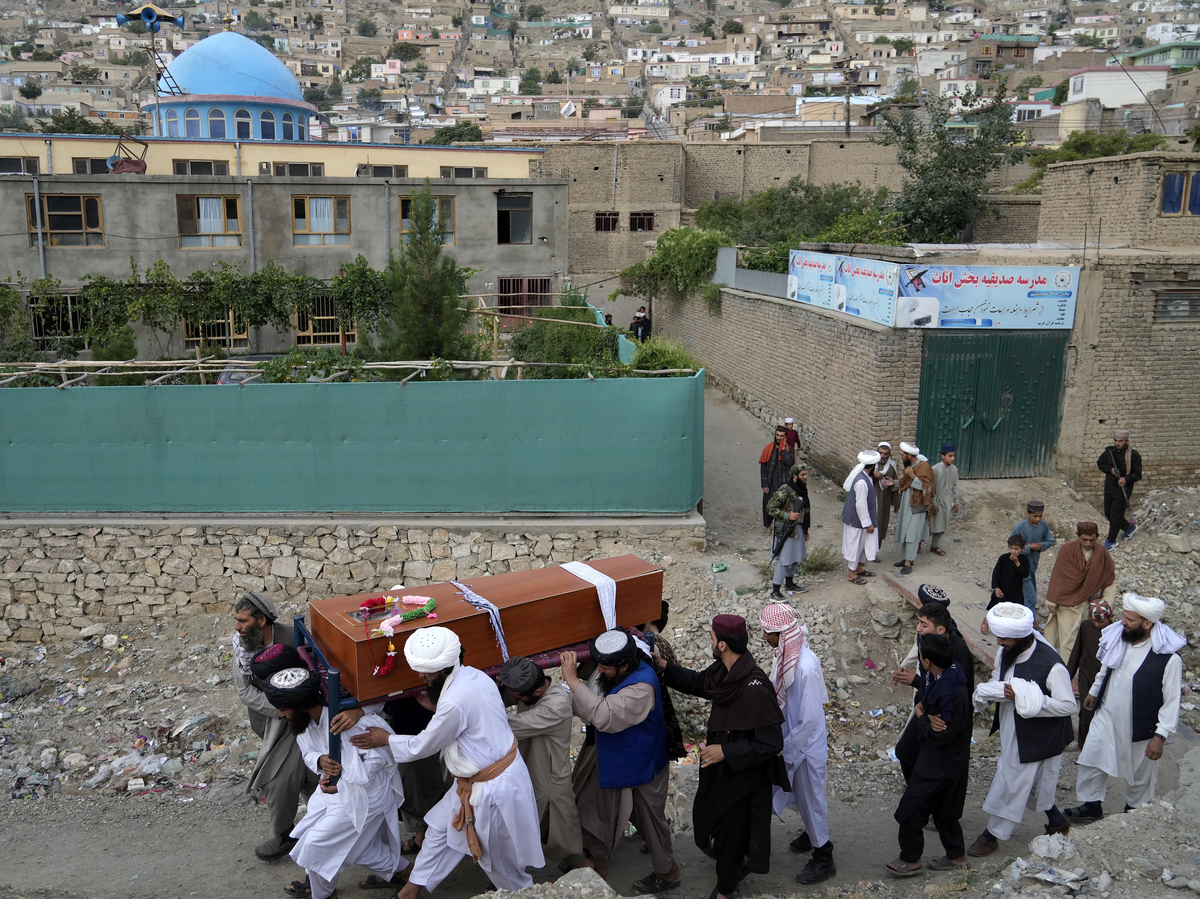 Mourners carry the body of a victim of a mosque bombing in Kabul, Afghanistan, Thursday, Aug. 18. 2022.

KABUL, Afghanistan — A bombing at a mosque in the Afghan capital of Kabul during evening prayers killed at least 21 people, including a prominent cleric, and wounded at least 33, eyewitnesses and police said Thursday.

There was no immediate claim of responsibility for the attack Wednesday night, the latest to strike the country in the year since the Taliban seized power. Several children were reported to be among the wounded.

The Islamic State group’s local affiliate has stepped up attacks targeting the Taliban and civilians since the former insurgents’ takeover last August as U.S. and NATO troops were in the final stages of their withdrawal from the country. Last week, the IS claimed responsibility for killing a prominent Taliban cleric at his religious center in Kabul.

Khalid Zadran, the spokesman for Kabul’s police chief, gave the figures to The Associated Press for the bombing at the Sunni mosque.

According to the eyewitness, a resident of the city’s Kher Khanna neighborhood where the Siddiquiya Mosque was targeted, the explosion was carried out by a suicide bomber. The slain cleric was Mullah Amir Mohammad Kabuli, the eyewitness said, speaking on condition of anonymity because he was not authorized to talk to the media.

Taliban spokesman Zabihullah Mujahid also condemned the explosion and vowed that the “perpetrators of such crimes will soon be brought to justice and will be punished.”

There were fears the casualty numbers could rise further. On Thursday morning, one witness to the blast who gave his name as Qyaamuddin told the AP he believed as many as 25 people may have been killed in the blast.

“It was evening prayer time, and I was attending the prayer with others, when the explosion happened,” Qyaamuddin said. Some Afghans go by a single name.

AP journalists could see the blue-roofed, Sunni mosque from a nearby hillside. The Taliban parked police trucks and other vehicles at the mosque, while several men carried out one casket for a victim of the attack.

Since regaining power, the former insurgents have faced a crippling economic crisis as the international community, which does not recognize the Taliban government, froze funding to the country.

Separately, the Taliban confirmed on Wednesday that they had captured and killed Mehdi Mujahid in western Herat province as he was trying to cross the border into Iran.

Mujahid was a former Taliban commander in the district of Balkhab in northern Sar-e-Pul province, and the only member of the minority Shiite Hazara community among the Taliban ranks.

Mujahid had turned against the Taliban over the past year, after opposing decisions made by Taliban leaders in Kabul.