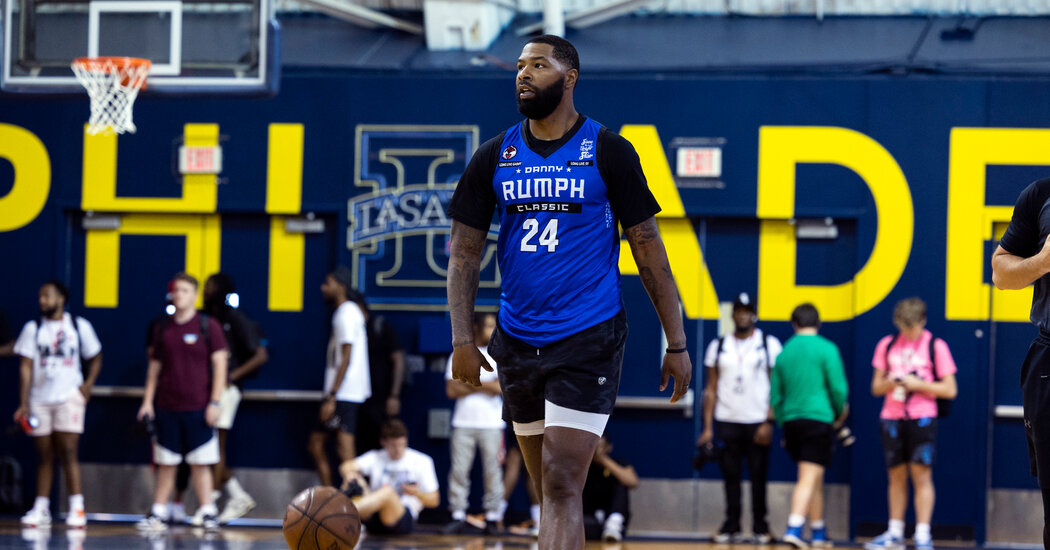 PHILADELPHIA — Merge the raucous atmosphere of the Danny Rumph Classic with the risk of injury in competitive summer basketball, and it seems like a risk not worth the reward for the N.B.A. stars playing alongside amateurs and lower-level pros.

One player rolled an ankle and had to be helped off the court by the medical staff. Another exited in a wheelchair as a precaution after an injury. And a palpable sense of dread spread through the gym when Los Angeles Clippers forward Marcus Morris blew by his defender for a layup then landed face down in the seats behind the hoop. When he sprang back up, the crowd seemed to let out a collective exhale.

“You could risk injury anywhere,” Morris said, adding that he longed to see N.B.A. players in person while growing up in South Philly, but never did. “The biggest thing is actually being visible. Having people that grew up in the same neighborhood as you, being able to touch and feel you, being able to talk to you, that means the most.”

There’s also a bigger purpose that lures the N.B.A. stars each year to the five-day summer event at La Salle University: raising awareness about cardiac health. Their uniforms tell the story of a basketball tournament that strives to save lives.

On the bottom of the shorts, a star represents each of the 17 tournament years. Down the left side of the jerseys, a set of coordinates pinpoints where Rumph died almost two decades ago. And on the jersey’s left shoulder, the motto “Save the next Bright Star.”

Rumph, a Philadelphia high school basketball star who played at Western Kentucky University, died in 2005 at age 21 from a heart condition that led to cardiac arrest during a pickup game in the city. The tournament helps fund a foundation bearing Rumph’s name that has provided free electrocardiogram screenings for young athletes aged 5 to 19.

Organizers said 61 screenings conducted in partnership with the Children’s Hospital of Philadelphia on July 30 found 11 people with heart abnormalities, including six with hypertrophic cardiomyopathy — the same condition that led to Rumph’s death and is a leading cause of sudden cardiac arrest among youth.

“A lot of them have to stop playing sports, and it hurts them, but I try to explain to them that at least your life is saved,” said Viola Owens, Rumph’s mother. “That’s why the heart screenings are so important to me. If I can save one parent from going through what I went through, it makes all the difference in the world.”

While the tournament has solemn beginnings, the atmosphere on and off the court can be downright hostile — and that’s how the players like it.

The tournament is the flagship event of the Daniel E. Rumph II foundation, created by Rumph’s mother and Marcus Owens, his uncle. One of Rumph’s childhood best friends, Mike Morak, spearheaded the tournament’s creation in 2006 at the recreation center where Rumph died — now named for Rumph — until the venue could no longer accommodate the large crowds.

“It puts an unbelievable smile on my face to be able to tell his mom that this N.B.A. player or that player is going to play,” Morak said. “And for her to know that we built something with her son’s name that those people think enough about — along with the Philadelphia environment and the competitive nature of it — that they want to play.”

And that environment can be intense and unforgiving. One coach ridiculed a referee for several minutes after the referee called a technical foul on the tournament’s third day: “This is a charity game, and you’re calling that?” the coach yelled with his arms extended and a look of bewilderment as other coaches pulled him away. A few nearby spectators broke into laughter.

On the second night, the fans who couldn’t find seats (or decided not to be in them) stood near the court, yelling at players and referees while volunteers urged them not to get too close to the sidelines. Marcus Morris shook hands with one fan after he made a contested layup. “I should’ve dunked that!” Morris said before sprinting back on defense.

Each day an M.C. paraded up and down the sideline with a microphone, commenting on the games and making fun of players and fans. Justin Jaworski, a member of the Oklahoma City Thunder’s G League affiliate, ignited the crowd on Friday, the tournament’s second day, scoring 33 points against the Morris twins’ team while an M.C. called him “the boul from ‘50 Shades of Grey.’” (“Boul” is Philadelphia slang for “guy.”)

Team Family Over Everything narrowly pulled out the 87-81 victory, and spectators sprinted onto the court. The players shook fans’ hands and posed for what seemed like a million different photos as security guards and event organizers urged them to leave the court so the next game could begin.

Lamar Stevens, a Philadelphia native who plays for the Cleveland Cavaliers, used to be among the fans that filled the stands, eager to watch and talk with the Morris twins and other N.B.A. stars who played in the tournament. Watching the former Lakers guard Dion Waiters and the Morris brothers helped Stevens believe he could make it to the N.B.A. Now Stevens hopes to be an inspiration, too.

“I want to show these kids what they’re capable of doing,” said Stevens, 25, who played in the tournament for the first time this year. “You know, the way I got to the league, I wasn’t drafted. I had to work and grind and get to the point that I’m at. So I’m just trying to be that example for the kids and show them what they can do if they lock in and really grind.”

For Eric Paschall, a New York City native and forward with the Minnesota Timberwolves, the environment is what lured him. He grew up playing at Dyckman Park in Manhattan but hasn’t played there since he’s been in the N.B.A. “I was going to try to play at Dyckman, but it’s outside,” said Paschall, who played with Brunson at the nearby Villanova University. “This was a better, more controlled environment, referees, and a real court, so I like it.”

And for Viola Owens, who tries to keep a low profile at the tournament, the basketball is just as important as the heart screenings.

“I look at them, and I see my son, and that’s what keeps me going,” she said. “They made this change much easier. I’ll be honest with you: I didn’t know how I was going to survive. That was my only child, and everything I did was for him, so it was like taking my world away, and then they gave me this whole other world.”