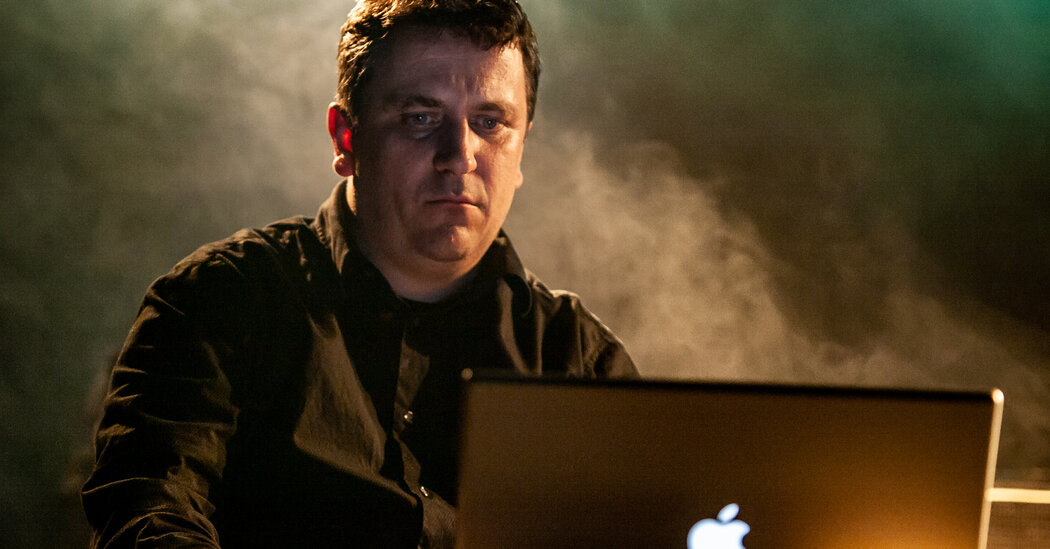 It was 1997, and Peter Rehberg and two collaborators had booked a tour of jazz and rock clubs, places that had probably seen their share of experimentation. The people who came to the shows, though, weren’t prepared for what the trio unveiled.

“There were some very interesting, sort of disturbed looks on their faces, because we set up with just three laptops in a row and just jammed out,” Mr. Rehberg recalled on a 2019 episode of the podcast “Noisextra.” “And everyone is going: ‘You can’t do that. That’s not music.’ And we’re going: ‘Yeah, fair enough; that’s not music. Did we say it was music?’”

Synthesizers and other bedrocks of electronic music had been around forever, but at the time not many people viewed the laptop as a performance instrument.

“We never thought of it as being a radical statement,” Mr. Rehberg said. “It was just like, ‘Oh, yeah; let’s do it this way.’”

That was just one moment in Mr. Rehberg’s decades-long exploration of sound, both as an artist who often recorded under the name Pita and as head of Editions Mego, a label he founded after being a central part of an earlier label, Mego. He was an important figure in the world of experimental music, though his work — some early recordings were made from sounds emitted by a refrigerator — often defied even that label.

His former partner, Isabelle Piechaczyk, said the cause was a heart attack.

In addition to his solo work, Mr. Rehberg collaborated constantly, both with other sound experimentalists and with choreographers and makers of theater. And his label provided a platform for a wide range of artists who in the digital age have been pushing sound composition in all sorts of directions.

“I followed Pita’s work as a musician and label owner for more than three decades, and he always defied expectations,” Peter Margasak, a music journalist and programmer, said by email. “He was the first person who made the laptop seem like a genuine tool for musical improvisation for me, manipulating a computer in real time with precision and voluminous possibility. His stewardship of Editions Mego revealed his eternal curiosity and openness, evolving aesthetically and geographically without surrendering an identity rooted in experimentation and innovation.”

Mr. Rehberg was born on June 29, 1968, in London to Alexander Rehberg and Barbara Allen. As a youth he accumulated a vast record collection and was interested in new sounds of all sorts. In a tribute on the music and cultural website The Quietus, John Eden, who was a year behind him at Verulam, a secondary school for boys, and became a friend, recalled a moment when they both worked at a Tesco grocery.

He drew a scolding, Mr. Eden wrote, “when it emerged that he had spent about an hour dropping Marmite jars on the concrete floor of the storeroom.”

“He liked how they sounded,” Mr. Eden explained.

By his early 20s he was living in Vienna, working as a D.J. and immersed in the experimental scene there. Ramon Bauer, Andreas Pieper and Peter Meininger had created the Mego label, and its first release, in 1995, was “Fridge Trax,” a Bauer/Pieper/Rehberg collaboration built on refrigerator noise. In 1996 Mego issued Pita’s first release, “Seven Tons for Free.”

Mego’s founders made him part of the label’s management team at a vibrant time for the label, and for experimentalism.

“Electronic music is being flocked to by young composers who are doing to it something like what punk bands did to rock ’n’ roll in the mid-70s,” Ben Ratliff wrote in The New York Times in 2000, when Mr. Rehberg performed at the Beer and Sausage Festival in Brooklyn, “and Mego is the equivalent of an aesthetic-structuring punk label like Stiff,” the label that released early recordings by Elvis Costello, Devo and others.

Mr. Rehberg continued to make solo recordings as Pita, releasing three more albums in the late 1990s and early 2000s, “Get Out,” “Get Down” and “Get Off.” Writing in The Chicago Reader in 2003, Mr. Margasak, who now lives in Berlin, described “Get Down” this way:

“Sound files collide, flow and overlap, as disfigured melodic shapes, tangled-up beats and penetrating tones explode in a furious barrage. The music is often amorphous, but both the changes the synthetic patterns undergo and the order in which the sounds follow one another create some carefully considered surprises.”

Mego went out of business in 2005, but Mr. Rehberg revived it soon after as Editions Mego. He went on to release work by scores of artists, sometimes forming sublabels devoted to particular strains or interests.

“A Mego record will necessarily be adventurous,” Ben Beaumont-Thomas wrote in The Guardian in 2015, “whether it’s showcasing the glitch aesthetic of Fennesz, droning noise from Stephen O’Malley and others, or outsider guitar work from Bill Orcutt or Jim O’Rourke.”

Mr. Rehberg, who for the past year had lived in both Berlin and Vienna, is survived by his father; a brother, Michael; his partner, Laura Siegmund; and a daughter from his relationship with Ms. Piechaczyk, Natasha Rehberg.