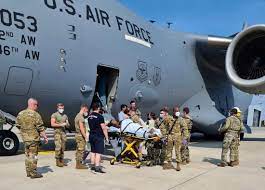 The Taliban fired into the air and used batons to make people line up in orderly queues outside Kabul airport on Sunday, witnesses said, a day after seven Afghan civilians were killed in a crush at the gates in swelling crowds, according to the British military.

The deadly chaos in and around the airport continued a week into the Taliban takeover of the country, as desperate Afghans continued to flee. A NATO official told Reuters that so far there had been 20 deaths outside the airport in the past week.

The seven deaths were recorded on Saturday alone, Britain’s Ministry of Defense said, but a semblance of order had taken hold the next day as Taliban forces ensured people formed orderly lines outside the main gates and stopped them gathering at the airport perimeter, witnesses told Reuters.

The United States issued a security warning Saturday, urging its citizens in Afghanistan to avoid traveling to Kabul airport without specific instruction, citing security risks. President Biden is also expected to provide an update later on Sunday on the situation in Afghanistan and the evacuation of citizens and refugees, the White House said.

Nearly 20 years of war, 10 days to fall: Afghanistan, by the numbers

Here’s what to know

At least 18 U.S. commercial aircraft will be deployed in the evacuation of Americans and Afghan refugees fleeing the Taliban takeover, the Pentagon said Sunday.
Abdul Ghani Baradar, considered the Taliban’s top political leader, arrived in Kabul over the weekend as the Islamist group eyes the formation of a new government.
Afghans in airport hangars in Qatar and elsewhere begin to ponder next steps now they’re out of the country.
One week into Taliban takeover, humanitarian situation in Afghanistan worsens
By Adela Suliman9:00 a.m.
Link copied
In the week since the abrupt Taliban takeover of Afghanistan, its citizens have been plunged into crisis, say humanitarian workers.

Amnesty International campaigner, Samira Hamidi, sketched a grim portrait of life in the nation on Sunday with the cost of basic food goods doubling, banks shuttered as people try to withdraw their savings and little to no Internet or phone cards, she said, stifling communications. Hamidi said an estimated 35 million Afghans were in need.

“This group will make people suffer,” she wrote on Twitter, referring to the Taliban. “It has already started.”

Everyday citizens are likely to feel the financial pain of Afghanistan’s economy under the Taliban, which has seen the United States freeze the country’s financial reserves and international humanitarian groups halt billions of dollars of aid.

Senior officials in Afghanistan’s toppled government, including acting central bank governor Ajmal Ahmady who has fled the country, have also warned in recent days that parts of the nation’s economy are on the brink of devastation, given the country’s high dependence on international funding.

United Nations officials have also sounded the alarm over a worsening humanitarian situation.

“Afghanistan is on the brink of a humanitarian and displacement crisis. The scenes that we’ve been seeing at Kabul airport are extremely distressing,” Laura Padoan, a spokeswoman for the U.N. Refugee agency, told Sky News on Sunday.

“We are extremely concerned about the human rights situation inside the country,” Padoan said, adding that the U.N. was distributing emergency tents, hygiene kits and basic aid.