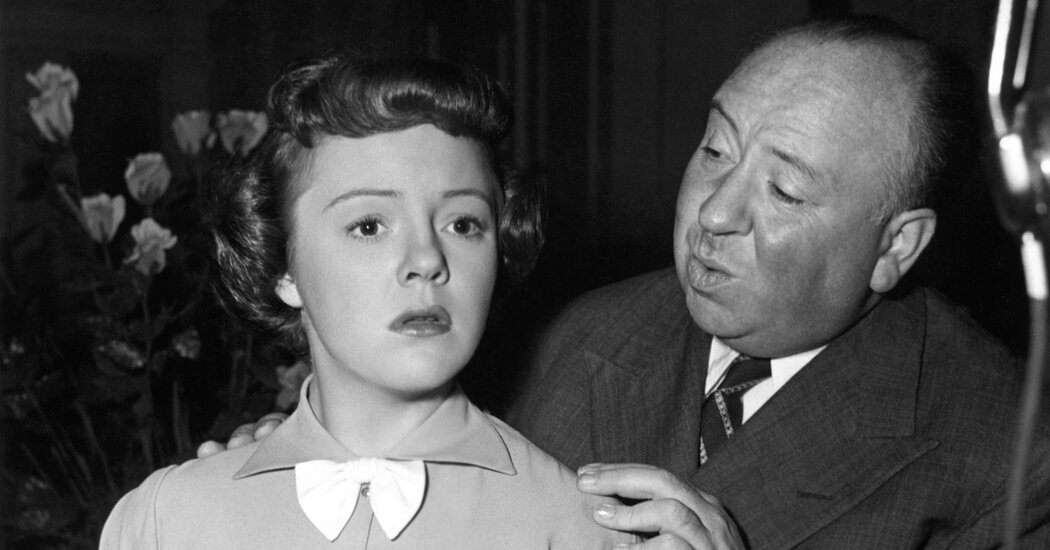 Pat Hitchcock looks at the troubling scene unfolding before her in her father’s 1951 thriller, “Strangers on a Train”: Bruno Antony — a psychopath who has strangled the estranged wife of a man, Guy Haines, he has just met and believes would in turn kill his father — is demonstrating his murderous technique on a society matron at a party.

“You don’t mind if I borrow your neck for a moment, do you?” asks the oleaginous Bruno, played by Robert Walker. He places his hands on her neck and starts to throttle her.

Miss Hitchcock, playing the sister of the woman Guy wants to marry, is seen in a blurry background shot, her expression curious. But it quickly turns to horror as she watches the matron struggle for breath; she sees that Bruno is staring at her, probably because she is wearing glasses like those the murdered woman had worn.

She finally freezes in shock after some other partygoers pry Bruno’s hands from the woman’s neck, and he collapses.

Miss Hitchcock says nothing in the scene, but it is perhaps her most notable in a modest career that included small roles in two more of her father’s films: “Stage Fright” (1950) and “Psycho” (1960), in which her character, Caroline, is a co-worker of Marion, played by Janet Leigh.

“My father wanted a contrast to Janet, someone more bubbly,” she told The Washington Post in 1984. “I barely remember the whole thing, and most people forget I’m in ‘Psycho.’ I say, ‘How can you possibly remember, after everything else that happens?’”

Patricia Hitchcock O’Connell — whose connection to her famous father included writing a book about his wife and collaborator, Alma — died on Monday at her home in Thousand Oaks, Calif. She was 93.

The death was confirmed by her daughter Tere Carrubba.

Patricia Hitchcock was born on July 7, 1928, in London. Her mother, Alma (Reville) Hitchcock, was a film editor who played a critical role as a writer, adviser and story consultant to her husband, a relationship Mrs. Hitchcock O’Connell explored in the 2003 book “Alma Hitchcock: The Woman Behind the Man,” written with Laurent Bouzereau.

Mrs. Hitchcock O’Connell explored her mother’s professional partnership with her father in a 2003 book.

Miss Hitchcock visited her father’s movie sets in England and moved with her parents to the United States in 1939 after her father received an offer from the producer David O. Selznick to direct “Rebecca” (1940). The move came just after the start of World War II in Europe.

“My father was devastated because his mother was in England,” Mrs. Hitchcock O’Connell told the Television Academy in a 2004 interview. “And I remember him trying to get a call through and the operators saying there are no more calls to the country because of the war.”

Miss Hitchcock made her Broadway debut at 13 in John Van Druten’s 1942 comedy “Solitaire,” playing the central role of Virginia, a rich girl who befriends a hobo. She had been recommended for the role by the actress Auriol Lee, who had appeared in Alfred Hitchcock’s film “Suspicion” the year before.

Reviewing the play in the The New York Times, Brooks Atkinson wrote, “She plays Virginia with childish innocence and sincerity.”

She had roles in two other Broadway shows, “Violet” (1944) and “The High Ground” (1951). By then, she had already been onscreen in “Stage Fright” as a school friend of Jane Wyman, who played an aspiring actress at the Royal Academy of Dramatic Art in London, which Mrs. Hitchcock O’Connell was attending at the time. She would graduate in 1950.

After “Strangers on a Train,” she was seen mostly on television. She had roles in the sitcoms “My Little Margie” and “The Life of Riley” and in anthology series like “Matinee Theater,” “Playhouse 90” and “Alfred Hitchcock Presents,” a series of mysteries and thrillers that featured her father’s droll onscreen introductions.

“I think ‘Alfred Hitchcock Presents’ really brought him to the public because they got to see him,” Mrs. Hitchcock O’Connell, who appeared in 10 episodes between 1955 and 1960, said in the Television Academy interview. “He loved it. He had the best time doing those lead-ins.”

While her acting career was linked to her father, she made clear in her book that her mother had a strong cinematic partnership with him, which included screenwriting credits on “Suspicion” and “Shadow of a Doubt” (1943).

“He would find a story and then take it to my mother and have her read it,” she told the BBC in 1997. “And if she thought it would make a film, he would go ahead with it and have a treatment and screenplay done.”

In addition to her daughter Tere, Mrs. Hitchcock O’Connell is survived by two other daughters, Mary Stone and Katie Fiala; six grandchildren; and eight great-grandchildren. Her husband, Joseph O’Connell, a sales consultant in the trucking business, died in 1994.

Mrs. Hitchcock O’Connell said she wished she could have acted in more of her father’s pictures. But that wish went unfulfilled.

“I would have loved it if he had believed in nepotism,” she said in the BBC interview. “But he only cast people if he thought they were absolutely right for the part. I could have told him a lot of parts I would have liked to have played, but he didn’t believe it.”