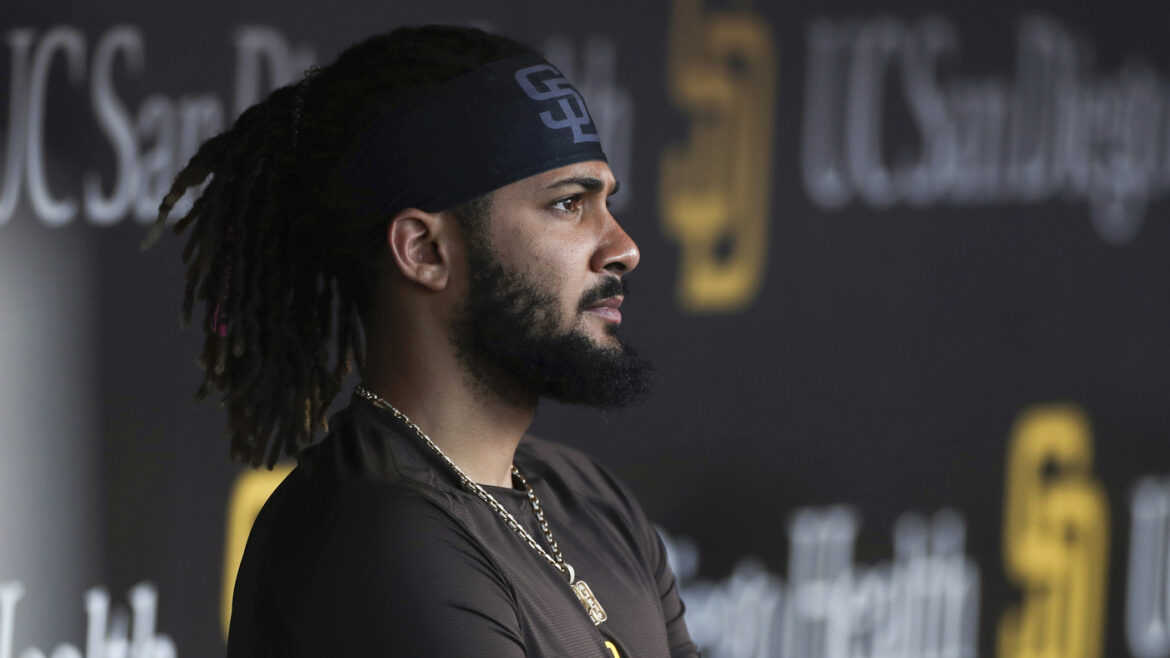 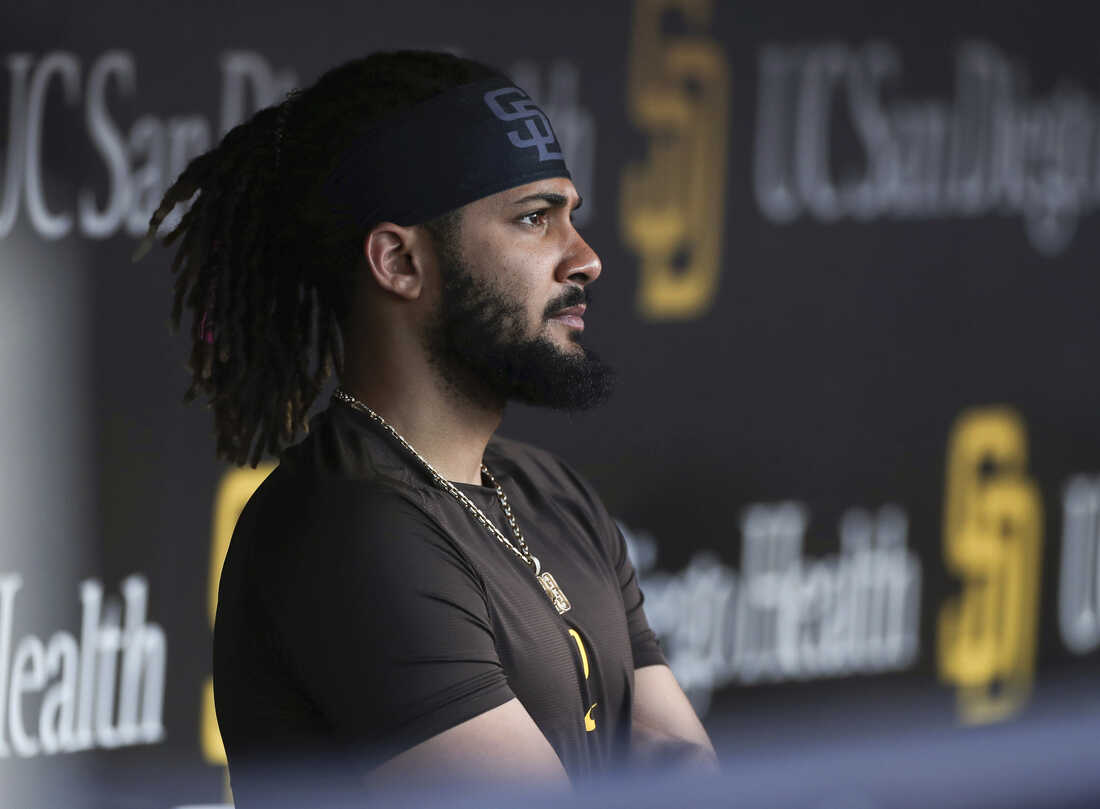 San Diego Padres’ Fernando Tatis Jr. looks out from the dugout prior to the team’s game against the Philadelphia Phillies on June 25 in San Diego. Tatis was suspended 80 games by Major League Baseball on Friday after testing positive for a performance-enhancing substance. 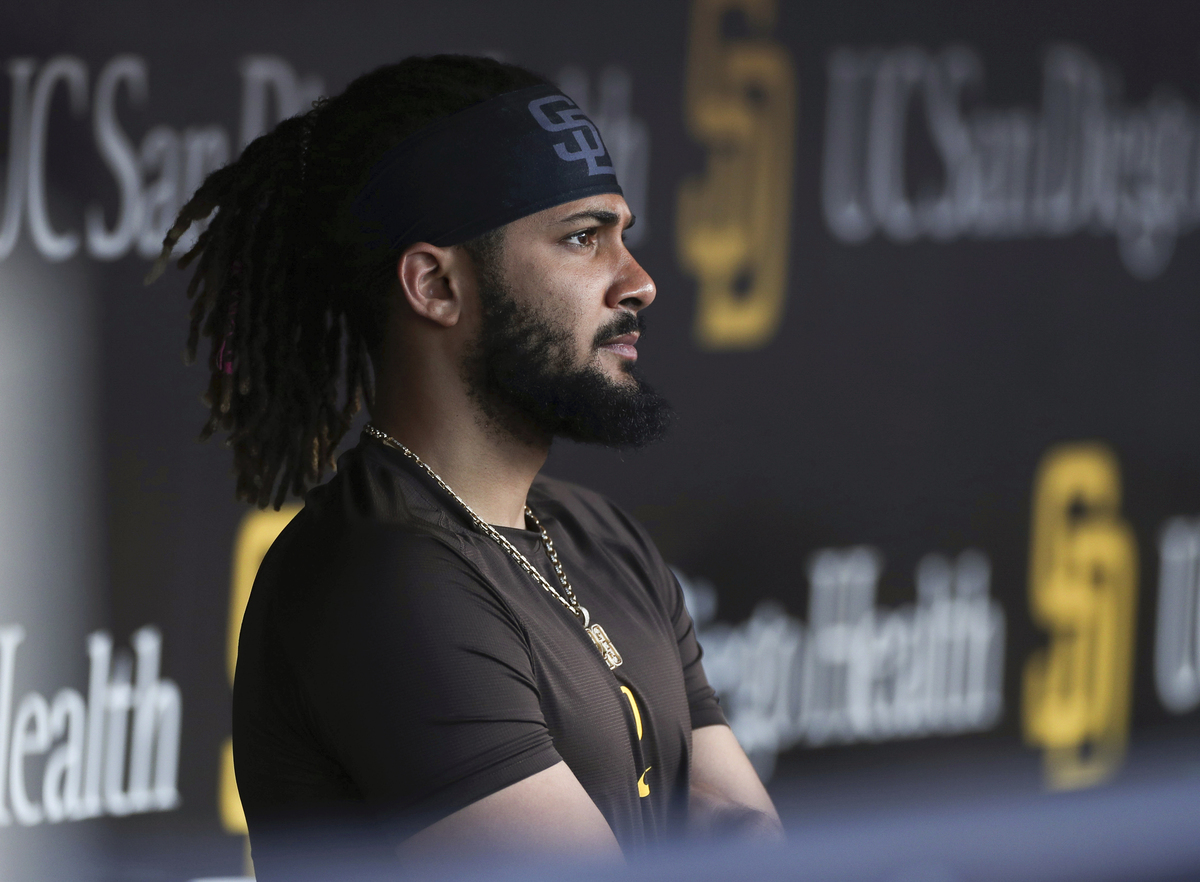 San Diego Padres’ Fernando Tatis Jr. looks out from the dugout prior to the team’s game against the Philadelphia Phillies on June 25 in San Diego. Tatis was suspended 80 games by Major League Baseball on Friday after testing positive for a performance-enhancing substance.

WASHINGTON — San Diego Padres dynamo Fernando Tatis Jr., one of the brightest, freshest stars in all of Major League Baseball, was suspended 80 games on Friday after testing positive for a performance-enhancing substance and won’t play this season.

The penalty imposed by MLB was effective immediately, meaning the All-Star shortstop — who had been out the entire season because of a broken wrist but was expected to return to the playoff contenders next week — cannot play in the majors until next year.

Tatis will miss the remaining 48 regular-season games this year. Any postseason games the Padres play would count toward the 80 that Tatis must sit out, and he’ll serve the rest of the suspension at the start of next season.

“Shocked everybody,” Padres star Manny Machado said after a 10-5 win over Washington.

The 23-year-old Tatis, who signed a $340 million, 14-year contract before the 2021 season, became one of the most prominent players ever penalized for performance-enhancing drugs, along with Alex Rodriguez and Manny Ramirez. The penalty will cost Tatis about $2.9 million.

MLB said the suspension also will prevent Tatis from playing for the Dominican Republic in the World Baseball Classic next March.

“Obviously, everybody’s very disappointed. Somebody that from the organization’s standpoint we invested time and money into,” Padres general manager A.J. Preller said at Nationals Park, where San Diego played Washington.

Flashy at the plate and in the field, Tatis was an All-Star last season when he led the National League with 42 home runs. He was set to soon rejoin the Padres to boost a lineup that added star outfielder Juan Soto this month right before the trade deadline.

In a statement released by the players’ union, Tatis said he was “completely devastated” and apologized to Padres management, his teammates, MLB and “and fans everywhere for my mistake.”

“It turns out that I inadvertently took a medication to treat ringworm that contained Clostebol,” he said. “I should have used the resources available to me in order to ensure that no banned substances were in what I took. I failed to do so.”

“I have no excuse for my error, and I would never do anything to cheat or disrespect this game I love,” he said.

Tatis added that “after initially appealing the suspension, I have realized that my mistake was the cause of this result, and for that reason I have decided to start serving my suspension immediately. I look forward to rejoining my teammates on the field in 2023.”

Freddy Galvis and Dee Strange-Gordon are among the major leaguers previously suspended for using Clostebol, which can be used for ophthalmological and dermatological use. It is also banned by the World Anti-Doping Agency, and Olympic gold medal winning cross-country skier Therese Johaug was suspended in 2016 after testing positive for it.

Players who test positive for PEDs are ineligible for the postseason that year.

Preller said he found out about the suspension late Friday afternoon. He said he hadn’t spoken yet to Tatis, but had seen his player’s statement.

“Again, that’s his story. I haven’t had a chance to talk to him about it yet. Ultimately that’s his explanation,” Preller said. “I think the biggest thing just from our standpoint, from a baseball standpoint, there’s a drug policy in place. He failed a drug screen. For whatever reason.”

“Ultimately, he’s suspended and can’t play. That’s the biggest thing. That’s a player’s responsibility to make sure he’s within compliance of that. He wasn’t. Ultimately supportive of that and want to make sure he understands that,” he said.

The son of a former big leaguer, Tatis made his MLB debut in 2019 and quickly became a smash hit on the field and with the fans. He has a career .965 OPS and has played shortstop and in the outfield.

Tatis had been on the injured list this season after breaking his left wrist — the accident is believed to have been in December in a motorcycle accident in the Domincan Republic. He had surgery in mid-March.

“I think we’re hoping that from the offseason to now there would be some maturity. Obviously with the news today it’s more of a pattern and something we’ve got to dig a little more into,” Preller said.

“I’m sure he’s very disappointed. At the end of the day, it’s one thing to say. You’ve got to start showing it with your actions,” he said.

Preller added: “I think what we need to get to is a point in time we trust (him). Over the course of the last six or seven months, that’s been something that we haven’t been really able to have there.”

“I think from our standpoint, obviously he’s a great talent, he’s a guy we have a lot of history with and do believe in, but these things only work when there’s trust both ways.”

On Aug. 6, Tatis began a minor rehabilitation assignment with Double-A San Antonio. He was 2 for 9 with a double and a triple in four games.

The Padres traded for Soto in hopes of making a run deep into October. They figured a roster that included Soto, Tatis and Machado could give them a better chance at the first World Series championship in team history — now, they’ll have to make that try without one of those key pieces.

“Hearing that he’s going to get suspended for 80 games and not be a part of what we’re trying to accomplish here is something you don’t want to hear before a game and don’t want to hear overall. It’s just a terrible thing,” Machado said.

“We were waiting to get him back and for him to be a sparkplug,” he said.

Added manager Bob Melvin: “This is a blow for us. … I’m glad we made the moves we did over the deadline.”

Tatis won’t be able to play in the WBC early next year. Dominican fans had been salivating at the prospect of seeing a bruising lineup that included Tatis, Soto, Vladimir Guerrero Jr., Rafael Devers and José Ramírez.

Tatis will forfeit $1,510,989 of his $5 million salary this year, covering the final 55 days and 48 games of the season. He will lose approximately $1.39 million of his $7 million salary for the first 32 games of next season, with the exact number to be determined by how many days he misses.

“There is nowhere else in the world I would rather be than on the field competing with my teammates,” Tatis said.

“I have taken countless drug tests throughout my professional career, including on March 29, 2022, all of which have returned negative results until this test,” he said.

The penalty was announced shortly before the Padres played Washington. San Diego began the day at 63-51 and holding the final of the three NL wild-card spots.

Preller said the team had about 15 minutes to talk about Tatis’ suspension before taking the field.

“We haven’t had (Tatis) for this season, so it’s not like we’ve had him in the lineup and now we won’t,” Preller said. “I think to a man all the guys in that clubhouse believe we can win. They know we can win. Never been about one player.”