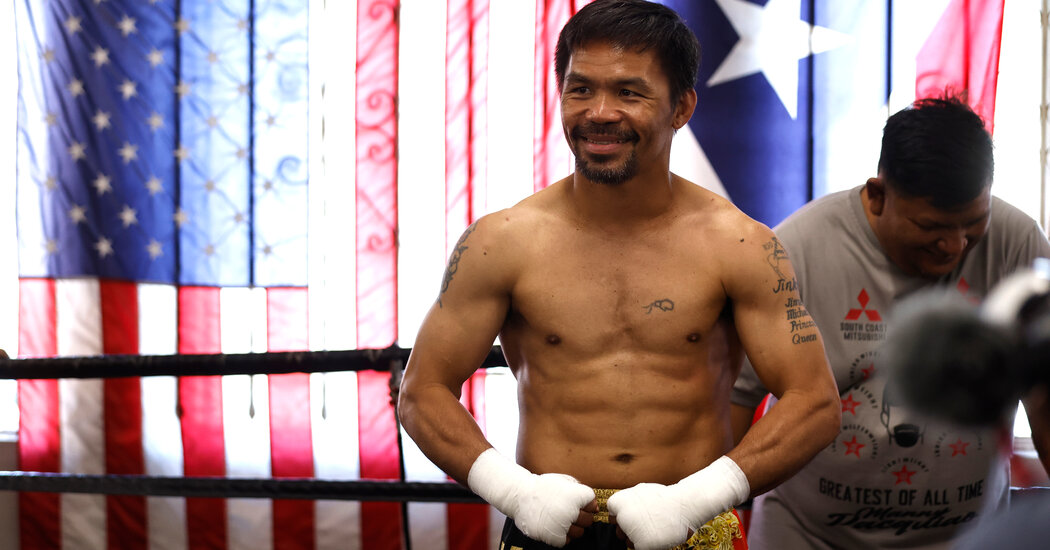 Under conventional wisdom, the 25-month gap since Manny Pacquiao’s last fight should work against him on Saturday night, when he faces Yordenis Ugas, a Cuban fighter based in Las Vegas, for the World Boxing Association welterweight title.

Pacquiao, 42, could return to the ring two years slower and more brittle than when he outclassed Keith Thurman in July 2019 to become the oldest welterweight champion in men’s boxing history. Ugas is three inches taller and seven years younger than Pacquiao, and could make Pacquiao pay if the older fighter’s speed has been dulled during his two-year absence.

But Pacquiao, one of boxing’s biggest draws from the late 2000s through the mid-2010s, said the time off gave him a chance to recharge. He said he trained as intensely as ever, but he focused more on recovery between sessions and between fights as he charges into middle age. He insists that on Saturday the public will see a refreshed fighter.

“I’ve been boxing 30 years, amateur to professional, nonstop,” Pacquiao, who is 62-7-2, said in an interview. “My body had time to rest for two years. Time to heal and recover.”

Saturday’s fight comes 20 years and two months after Pacquiao, then a 122-pound dynamo, made his U.S. debut on the undercard of Oscar De La Hoya’s title fight against Javier Castillejo. Sporting frosted blond bangs and trunks emblazoned with a “No Fear” logo — timely hair and fashion choices for 2001 — Pacquiao blew out the incumbent champion Lehlo Ledwaba over six lopsided rounds. HBO’s play-by-play announcer, Jim Lampley, struggled to pronounce Pacquiao’s name. That bout happened so long ago, Lennox Lewis and Mike Tyson were still competing, and Floyd Mayweather Jr. was a junior lightweight nicknamed Pretty Boy rather than Money.

The staying power surprises even Pacquiao.

“I can’t ever imagine I would still be here after 20 years,” said Pacquiao, who turned pro in his home country of the Philippines in 1995.

Most of Pacquiao’s contemporaries are either retired, like Lewis, or fighting in novelty bouts, like Tyson did against Roy Jones, and Mayweather did against the YouTube star Logan Paul. Only Pacquiao remains active and seeking elite opponents.

Pacquiao had signed to fight Errol Spence for the World Boxing Council and International Boxing Federation welterweight titles. But a routine prefight eye exam — required in Nevada but not in all states — revealed a torn retina in Spence’s right eye, forcing the 31-year-old out of the fight and Freddie Roach, Pacquiao’s trainer, to draft a new game plan on short notice.

“It’s small adjustments, but it’s not that big of a deal,” Roach said in an interview.

By boxing industry standards, an opponent change 10 days before the biggest fight card of the season qualifies as low-grade drama. The summer’s other mega event, a third meeting between the heavyweights Tyson Fury and Deontay Wilder, was postponed until October after a coronavirus outbreak in Fury’s training camp.

Last week, the W.B.A., which is sanctioning Saturday’s title fight, suspended a judge named Gloria Martinez Rizzo after her controversial scorecard in a bout between the American Mykal Fox and the Venezuelan Gabriel Maestre and after she was found to have written racist Twitter posts.

Against that backdrop, salvaging Saturday’s main event seemed comparatively simple. Ugas, who holds the W.B.A. title that the organization stripped from Pacquiao last year because of his inactivity, was scheduled to face Cristian Maidana in the cofeature bout but was promoted to the main event when Spence withdrew.

Until now, Ugas’s biggest claims to fame have been his friendship with the Yankees relief pitcher Aroldis Chapman, and his bad luck with boxing judges. In 2019 he lost a decision against Shawn Porter in a title fight that many observers thought he won.

Like Pacquiao, Ugas fights from a southpaw stance, and, like Spence, he is an aggressive body puncher who is not afraid to trade punches. He thrives more with timing than raw speed, prompting Roach to dismiss him as too slow to trouble Pacquiao.

“He can punch a little bit,” Roach said. “But he’s an ordinary fighter.”

For his part, Ugas said he and his trainer, the fellow Cuban émigré Ismael Salas, have an antidote to Pacquiao’s fast feet and rapid-fire salvos.

“You have to make a lot of adjustments, and I have a lot of faith in my training, my camp, my team and what we’re doing,” Ugas, who is 26-4, said in an interview. “If they underestimate me, they’ll have a problem.”

A victory would make Pacquiao the only boxer with title fight wins in four different decades, but it might not signal retirement. Roach has said that he will quit when Pacquiao does, but both think Pacquiao can still compete in a welterweight division that includes Spence, the World Boxing Organization champion Terence Crawford and next-generation stars like Vergil Ortiz Jr. and Jaron Ennis.

“I’m here, adding to my legacy in boxing,” Pacquiao said. “I’ll keep going, to inspire people and make the fans happy. My goal is to be the greatest of all time.”