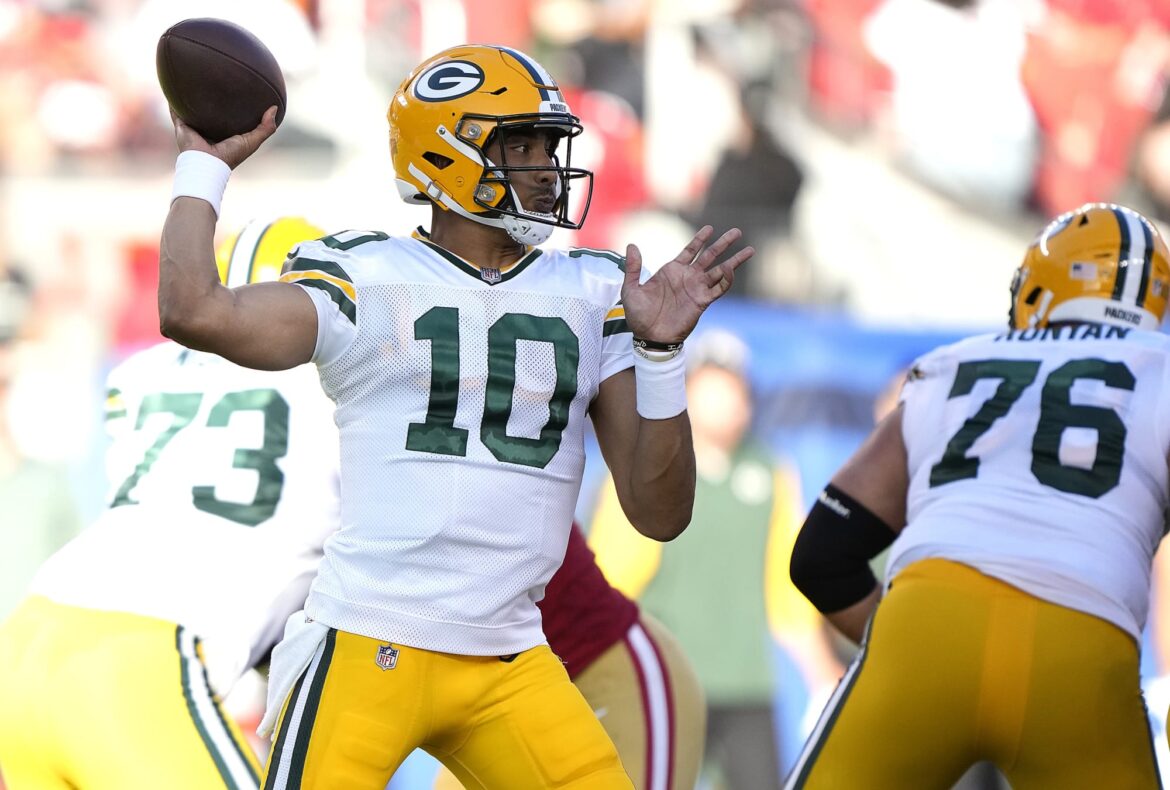 Jordan Love is throwing too many picks in a Green Bay Packers preseason game to ever even remotely think about replacing Aaron Rodgers when the starting quarterback calls it a career.

We could have told you then, but the Green Bay Packers trading up to draft Jordan Love as Aaron Rodgers’ replacement was a colossal waste of time and resources for everybody involved.

Admittedly, Love was a sophomore sensation at Utah State before Matt Wells and his staff decided to try their luck in Lubbock. He regressed badly in his first year with the Aggies, but did put enough on tape for Packers general manager Brian Gutenkunst to roll the dice on the project quarterback. Instead, we have entered year three, and he is throwing picks like Nathan Peterman…

Packers head coach Matt LaFleur may have said he was “pleased” with Love’s preseason performance vs. the San Francisco 49ers, but two touchdowns to three interceptions on 13-of-24 passing for 176 yards is nothing to write home about. There is basically a less than zero chance the Packers extend the fifth-year option to Love. All the while, Rodgers will continue to be a beast.

Ty Schmit reacting to Love being drafted in 2020 while impersonating Mel Kiper Jr. was spot-on.

Matt LaFleur reiterates the first two INTs from Jordan Love were not his fault and on the third, there were two busted routes and Love had “no where else to go with the football.”

Said he was “pleased” with Love’s performance.

Look. It does not matter how LaFleur tries to spin this in Love’s favor, he ain’t it, bro. It’s okay, because everybody knows. It may have only been a preseason game against a team Rodgers has no clue how to beat anyway when it matters, but Love threw three picks! Rodgers is many things, but one thing he is not is inherently reckless with the football. So what’s Love got to do with it?

If the Packers believe Rodgers is a year-to-year proposition at this point, then they need to find and develop a quarterback who mirrors his skill set. Easier said than done, but Rodgers is never going to throw three picks in a game. Heck, he could go the better part of a season before he throws his fourth interception on the year. See the problem here? Good, now let’s move on…

The Packers may have one of the weakest receiving corps in football, but they have an improving defense, a strong running game and the most talented quarterback in the NFC. Even if the Minnesota Vikings are trending up, Green Bay is still favored to win the NFC North. At this point, anything short of an NFC Championship game appearance will be seen as a big disappointment.

The Packers will one day have to replace Rodgers with someone, but that player is so not Love.