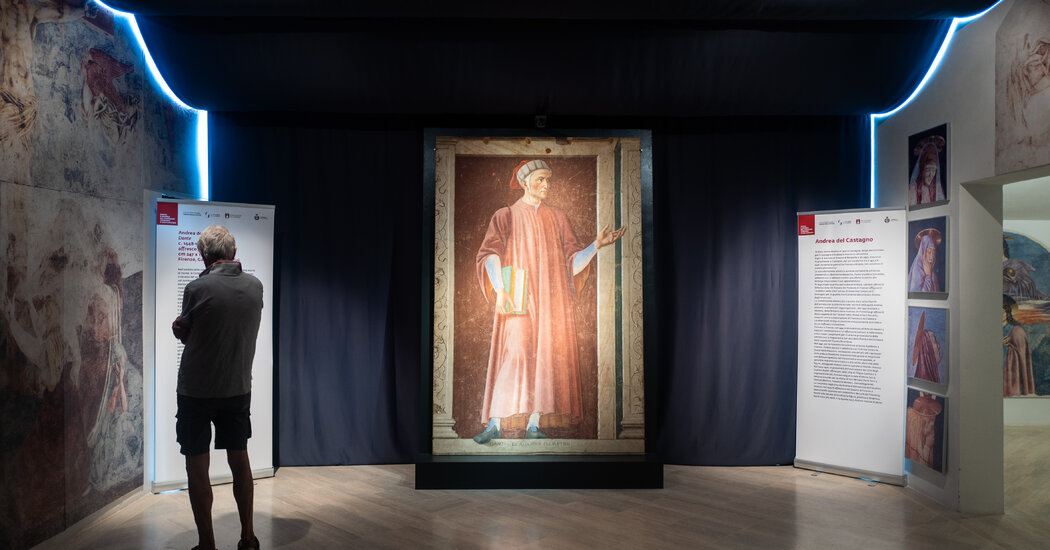 CASTAGNO D’ANDREA, Italy — This tiny hamlet with a population of around 300, located 40 winding miles northeast of Florence, has never been on Italy’s must-see A-list. Its main claim to fame is that it was the birthplace of the Renaissance painter Andrea del Castagno, who left as a child, most likely before he was old enough to doodle on the local walls. (If he did, there are no remnants of his scrawls.)

But this summer, cultural tourism here sharply increased after the Uffizi Gallery lent the village a recently restored del Castagno fresco depicting the poet Dante Alighieri. The loan coincides with national celebrations for the 700th anniversary of Dante’s death, as well as the 600th anniversary of the artist’s birth.

The fresco’s arrival was one of the first actions in a program called “Uffizi Diffusi,” or “Scattered Uffizi,” an initiative concocted by the gallery’s director, Eike Schmidt. Uffizi Diffusi aims to build stronger ties between the famous Florentine museum and towns scattered throughout the surrounding Tuscany region by lending them artworks usually kept in storage.

“As with all big museums, what we have on view is only a small part” of the collection, Schmidt said in a telephone interview. But few other museums can claim to have so many masterpieces that they can keep a Botticelli locked away from view. (The Uffizi can.)

Instead of following in the footsteps of the Victoria and Albert Museum in London, which opened a branch in Dundee, Scotland, or the Louvre, which opened an outpost in Lens, France, Schmidt said that he wanted to go in “a slightly different direction and really activate the entire region,” using the Uffizi brand as a calling card.

“You couldn’t do that in all parts of the world,” Schmidt said. “But I think, in Tuscany, it’s a perfect opportunity,” he added, because of the collection’s connection to the region. To bolster visibility, the Uffizi is using its popular social media accounts to plug the venues participating in the initiative.

The del Castagno fresco is one of the earliest surviving portraits of Dante, and exhibiting it in Castagno d’Andrea was “a dream come true” for Emanuele Piani, the mayor of San Godenzo, a nearby town that includes the hamlet in its jurisdiction.

The fresco has been installed in the first room of what local officials have called a “virtual museum” of del Castagno’s works, consisting mostly of photographs of the artist’s greatest hits, reproduced on a shrunken scale. The museum is inside the visitors’ center of the area’s national park, whose ancient beech forests were added in 2017 to UNESCO’s World Heritage List.

“Tourism to the area is usually linked to the national park,” mostly drawing trekkers and cyclists, Piani said. The loan of the fresco “is a vehicle for other kinds of tourists to get to know our territory,” he added.

That works with Schmidt’s view of the initiative. “We’re really hoping to promote a new form of tourism which encompasses both the cultural and the natural landscape aspect,” he said.

About 30 miles south of Castagno d’Andrea, a fairy-tale castle towers over the town of Poppi and has long drawn tourists to this part of Tuscany, a valley nestled in the Apennines known as the Casentino. Begun in the 13th century, the castle “has always been a center of power, so it has always been well preserved,” said Poppi’s mayor, Carlo Toni.

When Toni heard about the Uffizi initiative, he wrote to Schmidt offering the castle — where Nazi troops had hidden some works looted from the gallery during World War II, like Botticelli’s “The Birth of Venus” and Michelangelo’s “Doni Tondo” — as a venue.

The result is the exhibition called, “In the Sign of Dante, the Casentino in the Divine Comedy,” which runs through Nov. 30. Six of the seven works on display — including four drawings by the 16th-century artist Federico Zuccari — are from the Uffizi.

“The castle attracts visitors on its own,” said Toni, “but if there is value added, more people will come.”

The Uffizi’s curators and scholarly staff work with local curators to help select the works on loan. “You need to present a historically interesting and correct narrative,” Schmidt said. “We don’t just put the name of the town into the database and say the painting was there, so let’s bring it there.”

This year, other loans were given to an exhibition in Portoferraio, on the island of Elba, commemorating 200 years since the death of Napoleon, and to the towns of Prato, Pescia, Montespertoli and Anghiari.

When Schmidt announced the project last year, he had “tons of letters and phone calls” from local officials and the directors of smaller museums, he said. A working group from the Uffizi began touring the towns “to look at what we can do, and whether the locations would be appropriate.”

So far, about 60 towns have asked to participate, and about two dozen projects are in the pipeline for 2022 and 2023. “Every year,” Schmidt said, “the idea is to grow it a little more.”

Loans will take different forms: Some will be as part of temporary exhibitions, others for longer periods of time. Longer arrangements would be favored “when works of art can actually return to their original location,” Schmidt said.

The Tuscany regional government is working on a law to help finance major projects under the Uffizi Diffusi umbrella, like the restoration of the Villa Ambrogiana in Montelupo Fiorentino, near Florence. As part of that initiative, some of the hundreds of paintings from the villa that the Uffizi has in storage are set to return there.

“This year, because it was very, very important to me to start right away, we used the most tested and traditional means,” Schmidt said.

But now, the sky’s the limit. This month, Schmidt gave Elon Musk and his family a private tour of the Uffizi and told Musk, the SpaceX founder, that he would happily consider an Uffizi Diffusi project, should a space station ever open up on Mars.