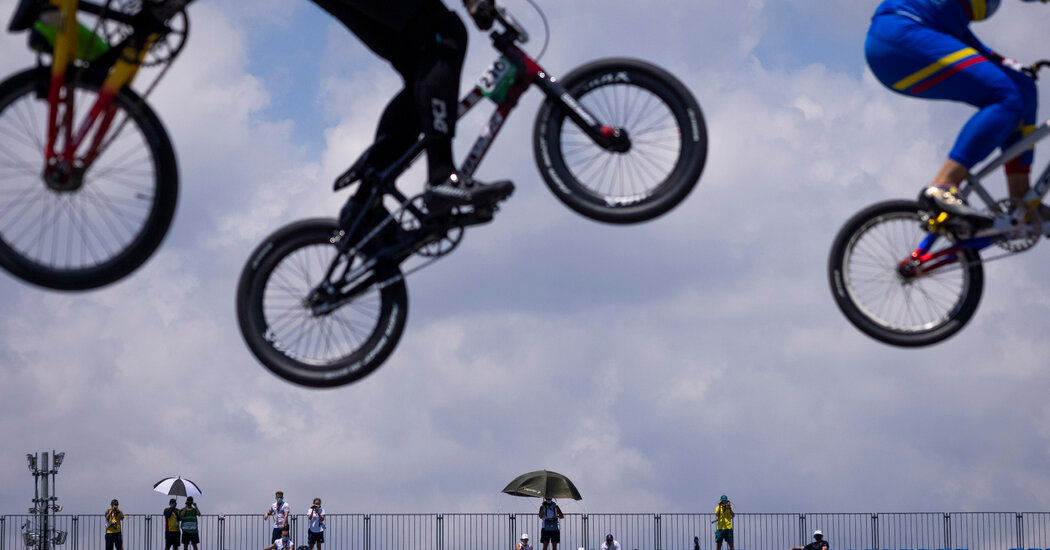 Over the last several weeks, a team of New York Times photographers sought to capture every aspect of the Olympic Games in Tokyo.

I was leaving the morning swim events and was all packed up and walking along the pool deck. I was looking at the other end of the complex and saw the springboard divers warming up, and saw an angle that we can’t shoot during competition and it caught my eye. I pulled out my 600-millimeter lens and started taking photos, and was thrilled to catch this moment.

Misugu Okamoto of Japan was a favorite to win the gold medal in women’s park skateboarding. She fell on all three runs, and finished in fourth place. After her third fall, she collapsed on the ground in tears. She was devastated. Her fellow competitors are also her friends, and when they saw her fall they lifted her up on their shoulders and cheered her on.

David Tshama Mwenekabwe, a middleweight boxer from the Democratic Republic of Congo, is heading to the ring to fight his first ever Olympic bout. His name has just been announced to the nonexistent crowd and, as he steps into the arena, he seems equally focused and lost in his thoughts. Sweat rests on his muscular frame from a warm-up. His gloves are raised as if ready for battle. The weight of expectancy is palpable, and three rounds of three minutes, or less, will decide his fate. I chose this image as my favorite because of this visible emotional charge and the intensity of the colors which seem to echo it.

It was hard to illustrate the Olympic Games that were not celebrated locally. This photo was taken from an observatory of a commercial building in Shibuya, which is a popular spot among young people. I wanted to create a moody photograph to illustrate a very different Olympics, held during the pandemic. I stayed there for a while and walked around until I saw visitors reflected on protection glass, which made for this unusual image.