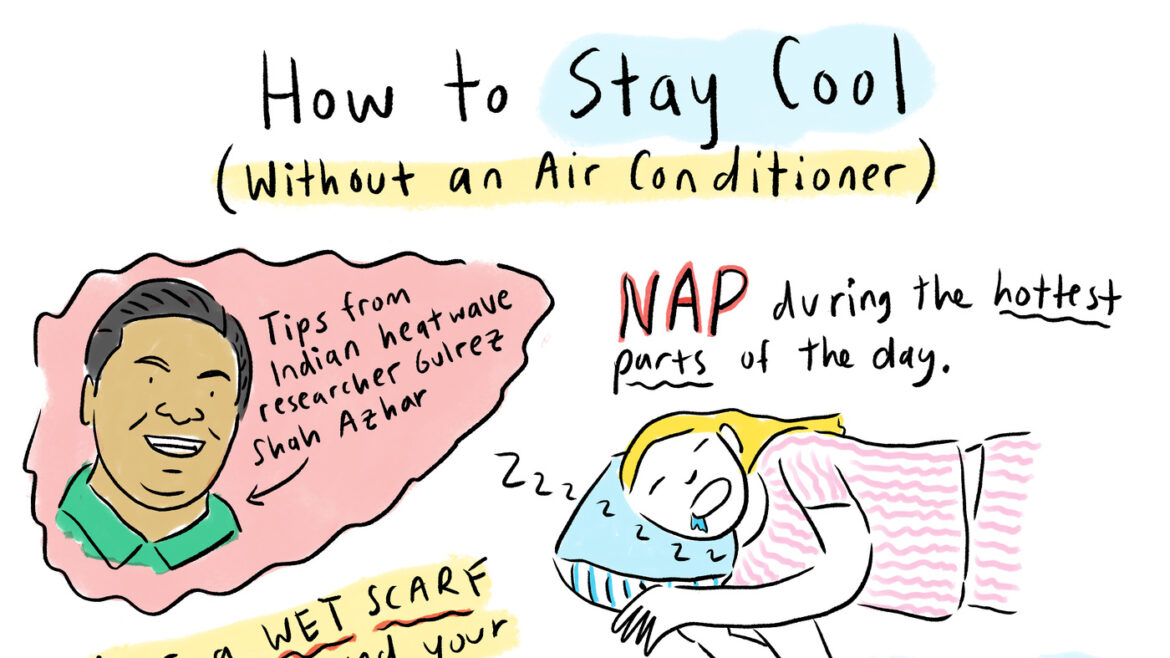 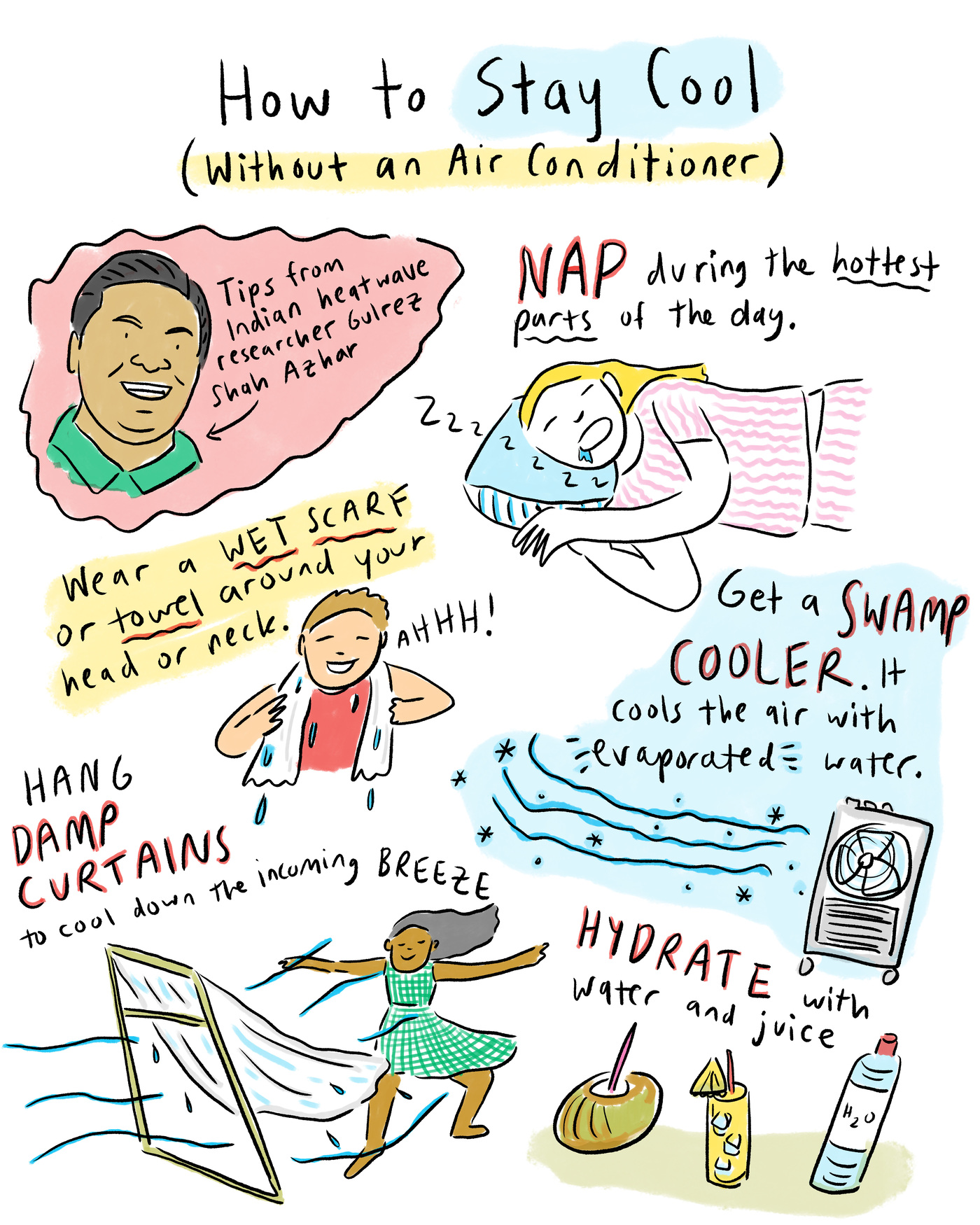 In Uttar Pradesh, India, where I grew up, temperatures can soar as high as 120 degrees in May and June. But very few people have access to an air conditioner.

With a per capita income of around a $1,000 a year, many people in this part of the country can’t afford to buy an A/C unit or pay the power bills that come with using one.

So how do people keep cool?

That’s a question that people are asking themselves as the world faces unprecedented heat waves, including in the U.S. Pacific Northwest and Europe, where many do not have air conditioners. Severe heat has already killed thousands of people this summer.

Yet people in India and in other countries across the Global South have long figured out ways to deal with the horrible heat. And so, I’d like to share a few tips on how to stay cool that I’ve learned from my upbringing and elders in Uttar Pradesh. Some of the advice is just what you’d think – like drinking lots of liquids and staying out of the sun – but others might surprise you.

I know that each of these tips on their own may seem trivial. But as a heat wave researcher, I can tell you that done together, they can really help the body cool down. The key is to be mindful of the power of heat – and remain prepared to prevent its adverse effects.

And remember, upon seeing any signs of heatstroke — like fever, headache, nausea, confusion or weakness — call an ambulance ASAP and get medical help. Use ice packs while waiting to be treated at the hospital. Seriously, don’t delay. Heatstroke can be fatal.

Here are a few tried-and-tested tips from India on how to stay cool without an air conditioner. (Also: We want to hear from you! Scroll to the end of this story to find out how to share tips from your culture on how to cope with heat.)

Drink lots of liquids — it doesn’t have to be water! 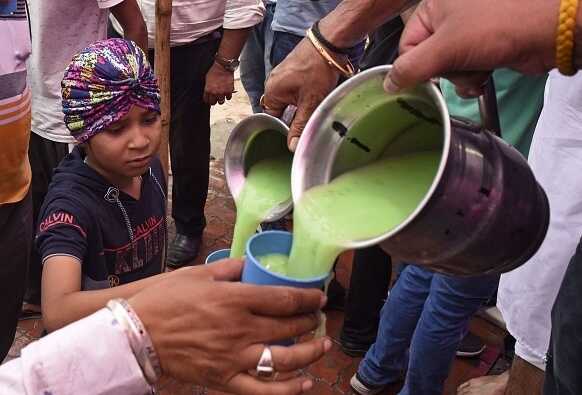 Volunteers distribute free cold drinks to commuters on a hot day in Amritsar, India, on June 29.

There are all kinds of wonderful drinks in India that people can make at home or pick up at a street market vendor. In addition to water, we quench our thirst with fruity drinks like sugarcane juice, coconut water, a tangy, raw mango juice called aam ka pana and an apple juice called bel ka sharbat. We also like cooling, milk-based drinks like lassi, a yogurt beverage popular in the summertime, and buttermilk. The key is to drink plenty of fluids to replenish the electrolytes lost in sweat and keep your body hydrated.

Find a cool spot to chill out.

Seek out the coolest parts of the building where you live and make that the place where you sleep or hang out. Because heat rises, lower floors in a multi-story house are cooler. Verandas are shady and airy. During the day, block out the sunlight with heavy curtains. Turn on any fans you have. And don’t be afraid to move the furniture around in your quest for coolness. Back in Uttar Pradesh, we used to scoot our beds closer to the windows so we could catch a breeze while we slept.

If it becomes impossibly stuffy indoors, move outdoors and lay in a hammock. Air created from swinging helps cool the body down. As a kid, I remember that mango orchards were the best for hanging out, as the dense foliage there provided maximum shade coverage.

Use water in creative ways. 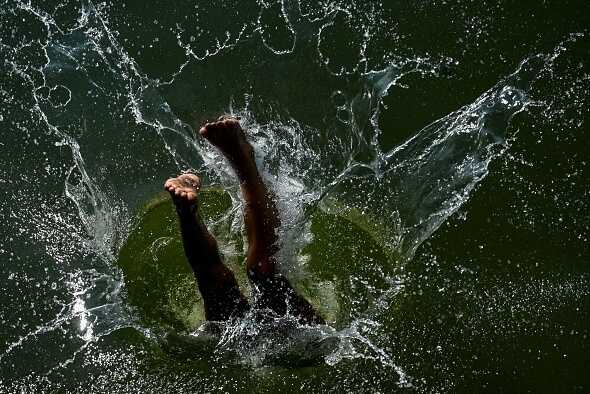 A boy jumps into Dal Lake to cool off on a hot summer’s day in Srinagar, India, on July 18. 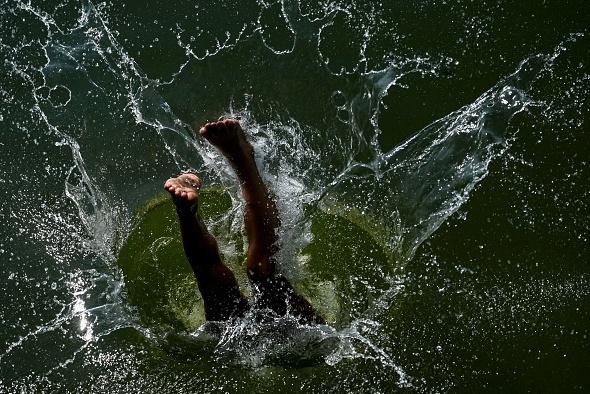 A boy jumps into Dal Lake to cool off on a hot summer’s day in Srinagar, India, on July 18.

In India, we have a number of contraptions to manage heat without an air conditioner. That includes khus — grass curtains hung over doors and windows and sprayed with water. The curtains convert the dry wind outside into a fragrant, cool, damp breeze as it blows into the house. And the ubiquitous swamp cooler. Also known as an evaporative cooler, this electrical device passes a room’s air over water-saturated pads, which cools down the air, then blows that air back into the room. These devices are cheaper than air conditioners and use less energy. You can even make one yourself.

Even if you don’t have khus curtains or a swamp cooler, you can find other ways to use water to regulate your body temperature. Take a cold bath or shower. Or take a light towel, called a gamchha in Hindi, dampen it and wear it around your neck or on your head like a scarf. This wet garb is omnipresent even now among men in the hinterlands and small towns.

You can also play with water. When I was a kid in India, I’d have water balloon fights with neighborhood kids. Or we’d fill a tub with water and splash it on each other in the backyard.

During the hottest parts of the day, try not to burn energy or exhaust yourself by going out, exercising or standing outside, because the scorching sunlight and hot air will make you hotter. Instead, do what I did in Uttar Pradesh: chill at home or take an afternoon siesta. If you have to work and have a flexible schedule, try to perform your duties in the cooler hours of the day. Farmers in my state, for example, schedule work in the early mornings and late evenings. And markets close in the hot afternoons but remain open until late in the night.

Choose airy cotton fabrics that don’t trap body heat, and colors like white, yellow and light blue that reflect light off the body. Darker colors absorb heat much faster, heating up our bodies. In Uttar Pradesh, many people wear a light-colored kurta, a loose, collarless shirt, and pajama, a lightweight drawstring trouser.

A/C is great … until the power goes out

In 2010, my family in Uttar Pradesh finally got an air conditioner. They say it’s great for keeping cool, and they keep it on all day in the summer. But their reliance on A/C makes their willingness to tolerate heat even more difficult when the power goes out – which happens often in India. So they go back to the age-old practices that I just shared here to beat the heat.

Your turn: Share tips from your culture on how to cope with heat

Did you grow up without air conditioner in a hot country? How did you deal with the heat? Email us at [email protected] with the subject line “Heat hacks” and we may feature your story on NPR.org. Please include your name and location. Submissions close on Wednesday, August 10.

Gulrez Shah Azhar is a Seattle-based Aspen New Voices fellow who is researching the health impacts of heat. Previously, he was a postdoctoral fellow at the University of Washington, a policy researcher at the RAND Corporation and an assistant professor at the Indian Institute of Public Health.