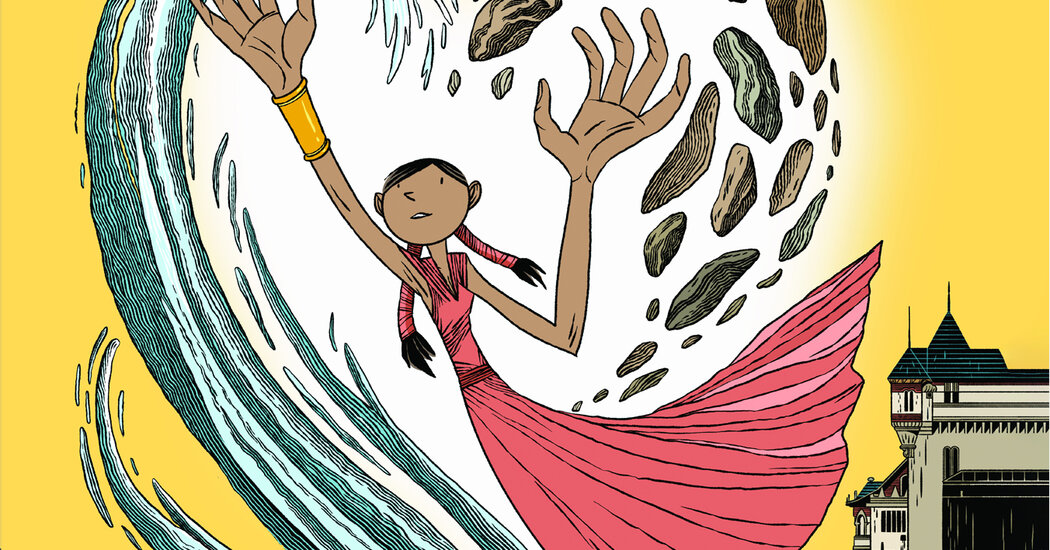 BLANCAFLOR, THE HERO WITH SECRET POWERS
A Folktale From Latin America
Written by Nadja Spiegelman
Illustrated by Sergio García Sánchez

DULCINEA IN THE FORBIDDEN FOREST
Written and illustrated by Ole Könnecke

Or, rather, it’s a tale that’s about a decade old: A father and his teenage daughter sit down on the family couch and binge-watch “The Great British Baking Show.” They delight together in the little dramas and the endless array of confectionary creations. There is laughter. There are a few tears. The father is kind of shocked at how invested he is. Sometimes the father even has to push “Pause” because he thinks Mary Berry made Ruby cry.

One of the things I love best about the show is a thing I love about the very idea of baking: It usually relies on some combination of eggs, flour, water, milk, butter, sugar, salt. Exotic ingredients appear intermittently, sure, but it’s the fundamentals that are the key. The tried-and-true. And what myriad results can be reached!

I love fairy tales for the same reason: They remix the tried-and-true. Fairy tales deal in elemental symbols and basic situations — keys and crowns; clever daughters and youngest sons; swords and lakes and mirrors and mountains. In the realm of storytelling, fairy tales are more baking than cooking. The same simple ingredients can be reconstituted into surprisingly fresh stories with entry points that are as familiar as “once upon a time.”

The three new book-length fairy tales gathered here are all made up of the most common ingredients: ogres and witches, princesses and woodcutters. Brothers searching for lost sisters and vice versa. Nothing exotic. But the combinations! These are the thumbprints of the bakers, and they lead to the most wonderful stories.

“The Little Wooden Robot and the Log Princess,” by Tom Gauld, is one of the best picture books I’ve read this year. It’s a cabinet of curiosities in a clockwork castle.

Gauld comes to picture books as a master cartoonist. (If you’re unfamiliar with his work, just search “Hunting for Easter eggs with Werner Herzog” and go from there.) Cartooning is a craft that transfers well to the picture book format, where words and pictures are teased apart just a little bit but still work very closely together. Gauld has made the jump as if it’s the most natural thing in the world, adapting his meticulous, clean-line style to a world without panel borders or word balloons. The book’s cover and endpapers feature a mélange of potent quest items — keys, gems, bottles, lanterns, eggs, pendants, leather pouches — all pointing the way to a boundless world.

But “The Little Wooden Robot” is not only a visual feast; it’s a funny, twisty, heartfelt yarn as well. It’s impossible not to cheer for this unlikely sibling duo, the eponymous little wooden robot and his sister, the log princess.

Their back story? In true fairy-tale form, a childless king and queen turned to less-than-traditional methods for the procurement of progeny. The king paid a visit to the royal inventor, who created a “wonderful, intricate” little wooden robot, while the queen stopped in on a kindly witch, who created a “perfect” little princess from a log. The complication is that each night the princess turns back into a log and can be awakened only by the words “Awake, little log, awake.” This is all fine and good until the fateful morning when an uninformed maid tosses what she thinks is just a regular log out the window, setting in motion a quest in which brother must save sister and sister must then save brother.

In addition to the engaging central quest, Gauld wryly lists, via short titles and single images, the other too-numerous-to-recount adventures each sibling has had individually “along the way.” (I’d jump to read “The Little Wooden Robot and the Giant’s Key,” or “The Log Princess and the Baby in a Rosebush.”)

The book is welcomely, and interestingly, diverse as well, shaking up familiar formulas. The queen and the log princess present as Black. The king and the little wooden robot present as white. And the inventor and the witch might well be sisters.

“Blancaflor,” by Nadja Spiegelman and Sergio García Sánchez — published simultaneously in Spanish — is a Latin American folk tale retold in comics. This particular story shares DNA with some of the oldest tales in existence, as the afterword notes: “Some version of … ‘The Girl as Helper in the Hero’s Flight’ exists in nearly every culture.”

García Sánchez’ art weaves animation-style gestures into something that has the look of a fine tapestry, and the characters straddle the cultural lines of the story’s diverse origins beautifully and unobtrusively. The ogre, for all his horns and pointed teeth, is dressed like a 19th-century Spanish landowner, while his daughters (including the magically powered Blancaflor) appear in something closer to Native or Mayan dress. And the prince, well, with his tights and slashed-sleeved doublet, he looks as if he stepped out of a 16th-century retelling of “Cinderella.”

Blancaflor herself is powerful, clever and brave. And her prince is a delightful idiot. I initially found Blancaflor’s love for him a little inexplicable. But in a fairy tale this is exactly the kind of thing you aren’t supposed to think about, and I was ultimately won over. The prince might be a bit of an airhead, but who needs wits when you have kindness, a guitar, a positive attitude and really great hair? The two do make a good team, and they reach their happily-ever-after side by side.

While “The Little Wooden Robot” is a good read-aloud, “Blancaflor” (more a comic than a picture book) is aimed at early and visual readers. It is splendidly designed and impeccably colored, and it crackles along at an adventurous pace that makes it excellent treehouse reading.

“Dulcinea in the Forbidden Forest,” by Ole Könnecke, has the feel of a classic fairy tale pulled from a big book in a forgotten attic, dusted off and lightly adapted for modern readers, with visual gags and a few sly winks. But “Dulcinea” is, in fact, an entirely original tale. It’s just made up of all the traditional elements. It boasts a remote castle, a kindly woodcutter, an eccentrically wicked witch (this one is so absent-minded she can’t remember a single spell without her book of magic) and one very loyal duck.

Dulcinea lives an idyllic life with her father in a house on the edge of a large forest. She helps with the chores but more often plays with the animals in the garden. What they don’t grow for themselves they pick up at the market in town. There’s only one rule: Do not go into the forest. Because that’s where the witch lives. That’s where witches always live.

The twist here is that it’s Dulcinea’s father who ends up breaking his own rule. On his daughter’s birthday, no less. Because he needs some blueberries for the pancakes. And of course the witch catches him. And of course she turns him into a tree (a tree with kind eyes and a very fetching mustache). And of course it’s up to Dulcinea to traverse the forest to the witch’s castle and steal the book of magic spells to make things right. “Thank goodness Dulcinea could read.”

It’s a well-told tale with an indefatigable heroine, and an interplay of words and pictures that feels as if it shares lineage with Quentin Blake and Roald Dahl. A fine winter evening read-aloud, to be enjoyed next to a warm fire with a plate of cookies. Or, you know, “biscuits.”