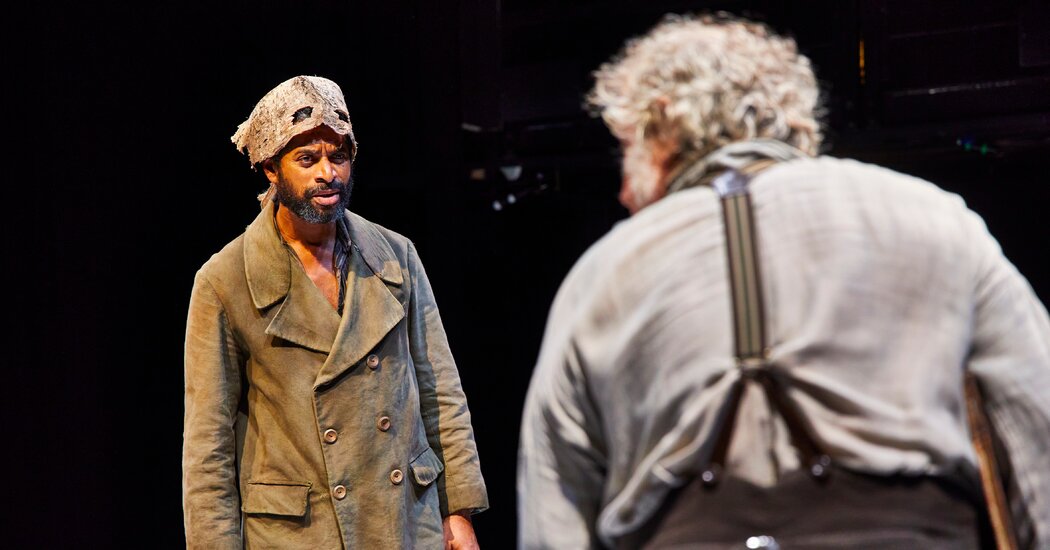 LONDON — It seems reasonable to expect fireworks from a play called “Rockets and Blue Lights,” a vivid title for an overstuffed, if intriguing, drama with no shortage of things to say.

Running through Oct. 9 at the National Theater here, Winsome Pinnock’s play may require a chart to help track the action: Ten actors play 24 roles. But if the intricate plotting takes a while to flare, the ambition of the piece is welcome throughout. In a theatrical climate defined over the last year by solo or small-cast plays, here is writing that thinks big. It also brings Pinnock back to the National, where the author, now 60, made history in 1994 as the first Black British woman to have a play at that address.

“Rockets and Blue Lights” was seen briefly in March 2020 at the Royal Exchange Theater in Manchester before the pandemic intervened; a subsequent radio version was adapted for the BBC. The director Miranda Cromwell’s current production tethers a strong cast to a play in which present and past collide. Pinnock’s principal theme is how artists illuminate (or betray) the world around them, and her way in is the work of the English Romantic painter J.M.W. Turner.

The reference in the title is to one of two oil paintings by Turner that were exhibited at the Royal Academy in London in 1840. The other, “The Slave Ship,” might depict the infamous 1781 Zong massacre, which resulted in the deaths of more than 130 African slaves at sea. (Scholars are divided over the work’s inspiration.) The same painting is also known by an explanatory alternate title, “Slavers Throwing Overboard the Dead and Dying — Typhoon Coming On,” and Pinnock traveled to the Museum of Fine Arts in Boston to see the picture for herself.

The drama begins in 2007, with two women debating Turner’s achievement. How can such an ugly scene be so beautiful, Lou (Kiza Deen), asks of a painting in which she has a vested interest. An actress, she has signed on for a film in which she will play one of the drowning slaves — an assignment a far cry from her previous starring role, on a TV sci-fi series called “Space Colony Mars.”

Pinnock then rewinds to the 19th century to address the rapport that develops between Turner himself (a feisty Paul Bradley) and a Black sailor, Thomas (an excellent Karl Collins), whom Turner encounters by the docks. “I can tell by your blistered hand that you’re a man of the sea,” Thomas notes admiringly of the artist. Thomas, though, comes to grief, as befits a play in which the dead haunt the living: The film Lou is making is called, significantly, “The Ghost Ship.”

The drama ricochets through enough themes — enslavement, artistic integrity, personal responsibility, among many others — for a play double its two-and-half-hour running time. Through it all, Laura Hopkins’s set allows water to lap at the edges: an apt visual for a play in which the sea is of more than passing interest.

That our attention is riveted throughout is due not just to Pinnock but also to Cromwell, a 2020 Olivier Award winner for “Death of a Salesman,” who locates the human pulse in an often dizzying text. The play ends with a moving roll call of the dead and a reminder that art can ennoble the deceased and, in a certain way, give them life.

Death also hovers over a second, though vastly different recent London opening: “Once Upon a Time in Nazi Occupied Tunisia,” at the Almeida through Sept 18. This play by Josh Azouz filters World War II through the lens of the German occupation of Tunisia, a onetime French protectorate, which began late in 1942. In thrall to France’s Vichy regime at the time of the Nazis’ arrival, Tunisia, a useful program essay informs us, was home not just to a predominantly Muslim population but to 90,000 Jews, many of whom did not make it to the protectorate’s liberation, in May 1943.

As his title suggests, Azouz has taken an obvious leaf from Quentin Tarantino and exhibits the Oscar-winning filmmaker’s taste for folding unexpected levity into tales of depravity. The result shares with Pinnock’s play a gratifying appetite for chronicling history anew, but wears out its welcome much faster: After a while, the gallows humor just seems glib.

“Once Upon a Time in Nazi Occupied Tunisia’s” defining character is a cruel yet smiley Nazi officer who has taken charge of the local community: The opening scene, set in a labor camp outside the city of Tunis, finds an impassioned young Arab, Youssef (Ethan Kai), forced by one of this villain’s minions to urinate on his longtime friend Victor (Pierro Niel-Mee), a Jew. Youssef advises Victor to move to New York after the war, and the talk soon turns to dispossession, and what it even means to call a place home.

The two men and their wives exist at the mercy of the tactically cheerful Nazi, who is improbably nicknamed Grandma because he likes knitting and refers to himself as an “old woman” — albeit one unafraid to float the prospect of gouging out the eyes of Victor’s wife, Loys (Yasmin Paige, eloquently furious).

The power games unfold on a deceptively drab wooden set by Max Johns that springs open as required, and features holes for characters to poke their heads through, as in Beckett. Yet the more Azouz recalls one forebear or another, the more you register the difficulty he has in navigating shifts in tone; the director Eleanor Rhode brings a comparatively prosaic eye to material that might benefit from some stage wizardry.

It’s good to see the charismatic Kai back onstage after his electric performance in “Equus” a season or two ago, and the comic actor Adrian Edmondson deserves credit for never soft-pedaling Grandma’s dark impulses. But for all its laudable intentions, the play sits suspended between historical inquiry, sendup and cautionary fable: audacious, to be sure, but not fully realized.