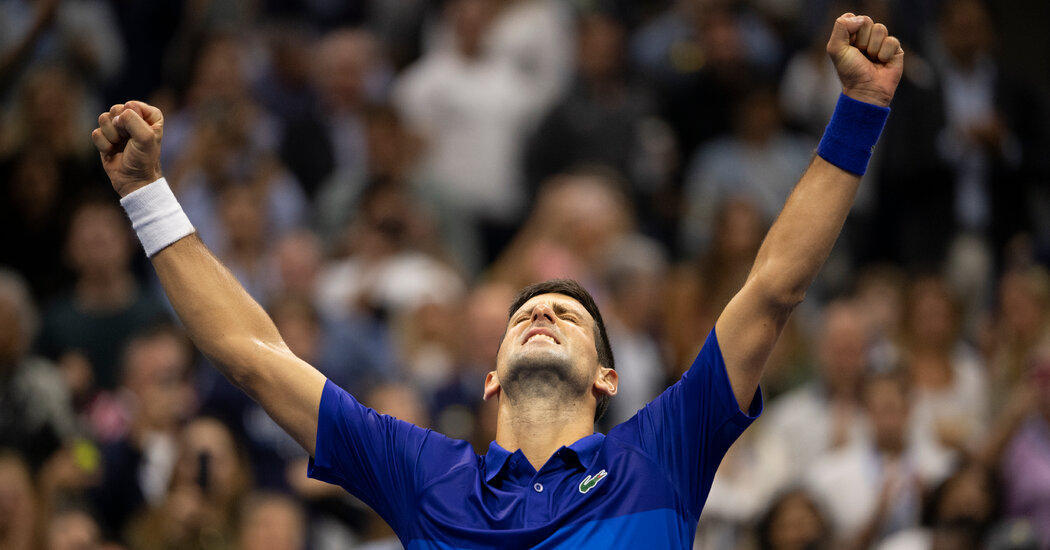 Twenty-seven down, one to go.

With a five-set win over Alexander Zverev of Germany on Friday night, Novak Djokovic moved to within a single match victory of pulling off the most hallowed achievement in tennis.

After winning the Australian Open, the French Open and Wimbledon this year and knocking out his first challengers at the U.S. Open, Djokovic now has to defeat only Daniil Medvedev of Russia in Sunday’s final to become the first man to win the Grand Slam in a calendar year in 52 years.

And he got there in style, coming from behind early on, then surviving an onslaught from an opponent who seemed for a time that he might just have Djokovic’s number. Zverev came close, forcing Djokovic to go the distance in a grueling 4-6, 6-2, 6-4, 4-6, 6-2 win, but the razor-thin margin only made Djokovic’s number at the Grand Slams in 2021 seem more mysterious.

The win on Friday night set the stage for one of the most remarkable weekends in tennis. On Saturday, the teenage sensations Emma Raducanu of Britain and Leylah Fernandez of Canada, who have captivated their countries and the crowds at the U.S. Open, will compete for the women’s title in the unlikeliest of finals.

Raducanu, 18 and ranked 150th in the world, was barely known two weeks ago and now is the first player to reach a Grand Slam final after making it into the main draw through the qualifying tournament. Fernandez, who turned 19 this week and is ranked 73rd, was until a few days ago known as little more than a scrappy, undersized battler whose future was anyone’s guess.

On Sunday, Djokovic will take on Medvedev and play for history. He is tied with his biggest rivals, Roger Federer and Rafael Nadal, in the race for the most career Grand Slam titles with 20, a competition that Djokovic is determined to win so he can cement his legacy as the greatest player ever. But that race may take a few more years to reach its conclusion. At this point, though, it is nearly impossible to believe that Federer and Nadal, who are battling age and injury, can win a calendar-year Grand Slam. It is the thing that would make Djokovic the biggest of the Big Three forever.

“The job is not done,” Djokovic said just past midnight Saturday morning. “The excitement is there. The motivation is there, without a doubt. Probably more than ever. But I have one more to go.”

Djokovic went into Friday night’s battle with the fourth-seeded Zverev after playing what he said were the three best sets of the tournament in a quarterfinal defeat of Matteo Berrettini: a four-set, come-from-behind win over a younger, bigger and more powerful opponent.

Djokovic, 34, was going to need a repeat performance against Zverev, a so-called next generation star who has figured out in the last year how to keep his cool in the biggest moments. In the U.S. Open final last year, Zverev blew a two-set lead, and even served for the championship, only to lose to Dominic Thiem in a tiebreaker at the end of a fifth set that descended into a parade of slices, errors and double faults.

That version of Zverev has disappeared in recent months, especially against Djokovic. At the Tokyo Olympics, Zverev roared back from a set and a service break down to overwhelm Djokovic in a semifinal.

When the draw for the U.S. Open came out two weeks ago, a rematch with Zverev in the semifinal round loomed as one of the biggest potential obstacles for Djokovic in his hunt for his sport’s holy grail. Zverev, 24, stands 6 feet 6 inches tall, floats around the tennis court with the grace of an N.B.A. shooting guard, and can unleash 130 m.p.h serves and rocketing forehands at will when he is playing well.

For the first time since the tournament began, though, the crowd in Arthur Ashe Stadium was firmly in Djokovic’s corner. He has long been far more respected than loved, but a former girlfriend has accused Zverev of abusing her repeatedly in 2019. No charges have been filed and Zverev has denied the allegations, but the off-the-court situation disqualified him from being embraced as an endearing underdog.

Chants of “Nole” — Djokovic’s favored nickname — began early in the night and spurred him as he mounted his latest comeback.

The match started as so many others have for Djokovic — with an early hiccup that made the mountain he would have to climb that much steeper.

This slip occurred as Djokovic served with the score tied at four games each, a moment fraught with danger against someone with a serve as powerful as Zverev’s.

Zverev played his most aggressive game of the young night, whipping forehands that forced Djokovic to stretch on his backhand. Zverev inched ahead, and then Djokovic double-faulted to give the big German a chance to serve out the set. He did not waste it. Zverev won the opening set, just as Djokovic’s previous three opponents had.

But Djokovic is as good at flipping the script as anyone who has ever picked up a racket.

Berrettini has said Djokovic somehow gains energy from losing a set, rather than becoming demoralized. Just as he had in his last three matches, Djokovic raised the level of his game and surged to a second-set lead as Zverev began swatting untimely second serves into the net and getting lulled into the kinds of long rallies that are Djokovic’s strength. An hour-and-a-quarter after they began, Djokovic and Zverev were back where they started, all tied up.

The turning point of the match came nearly an hour later. With Zverev serving to stay in the set, Djokovic put on a display of tennis genius and played a game that may be the one historians point to as the moment the finish line of the Grand Slam finally came into sight.

No one in Arthur Ashe Stadium knew better than Zverev that rallying with Djokovic would result in a slow and painful death. And yet, somehow, Djokovic managed to play a kind of tennis Tai chi, sustaining rallies of 18, 32 and 12 shots to get to triple set point. Zverev survived rallies of 21 shots and an absurd 53 to save the first two.

Then, on the 15th shot of the sixth point of the game, he could do no better than float a desperate lob to Djokovic, who was waiting at the net to swat it down to take the lead for the first time all night.

Zverev would not go quietly, though. He took a page out of the Djokovic playbook and somehow seemed to draw energy from falling behind. With Djokovic serving at 1-1, Zverev battled to turn the third game into a mini-marathon, digging in and clinching it with a slick forehand passing shot that Djokovic could not come close to touching. With Zverev’s serve cranking up beyond the 130 m.p.h mark, Djokovic could not find the opening to get even. Djokovic’s chance at history was down to a single set.

Djokovic’s run to the precipice of the Grand Slam has had its share of five-set escapes. There was an early-round escape in Australia in February, when he overcame a torn abdominal muscle and the American Taylor Fritz. In Paris, he came back from two sets down to Lorenzo Musetti midway through the tournament and against Stefanos Tsitsipas in the final.

Now came the chance for one more, and he did not waste any time jumping on it. Holding a 1-0 lead, Djokovic — and likely everyone else in the stadium — could sense Zverev growing shaky, the old Zverev returning. A double-fault gave Djokovic a sniff at a break at 15-30. A backhand error gave Djokovic the break point. Then one more rally went the wrong way for Zverev, and the set became a seemingly inevitable series of Zverev misses, including one leaping overhead smashed wildly out of bounds.

One last backhand error for one last service break and after 3 hours and 35 minutes, Zverev was finally done.

A match that could have gone either way, Zverev called it. “It went his way,” he said. “Very often it does.”

And now the Grand Slam math becomes very, very simple: The only numbers that mattered were these — 27 matches down, one to go.