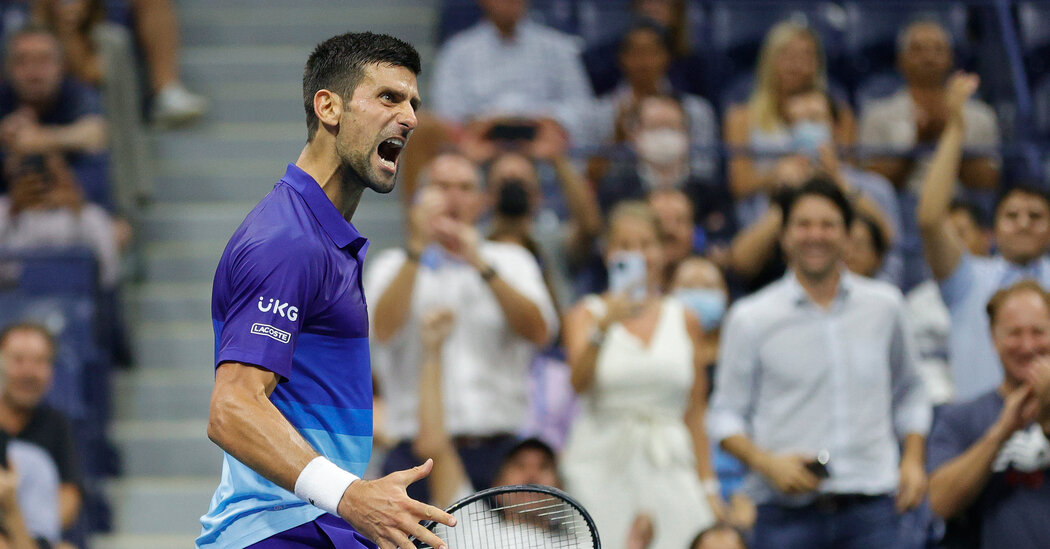 This, invariably, is Novak Djokovic, late in the evening, often well past midnight, when another day of work is finally done, when the arena has emptied and he sits in front of a microphone, his piercing eyes an odd combination of glazed and steely, and he tries to put into words what he has just endured.

To so many tennis players, their game exists as a kind of art. Stefanos Tsitsipas of Greece, the world’s third-ranked player, talks about tennis as a form of self-expression.

To Daniil Medvedev of Russia, who is No. 2 in the world rankings, tennis is a chess match, requiring the ability to think several shots ahead, to control the center of the court as though it is the center of a chess board, to make the quick moves needed to shift from defense to offense in an instant.

Then there is Djokovic, the player who stands one match away from pulling off the most hallowed achievement in the game — winning all four Grand Slams in the same calendar year. For Djokovic, tennis is not art, or ballet, and it is certainly not a game. It is combat, a street brawl in which there is only one survivor.

“I can go the distance,” he said as the clock ticked close to 1:30 a.m. Thursday, fittingly using a boxing expression after his 3 hour 27 minute duel with Matteo Berrettini of Italy in the quarterfinals. “Actually I like to go the distance.”

It’s a good thing, because he needed to Friday night against Alexander Zverev, outlasting the German star with the cannon serve, 4-6, 6-2, 6-4, 4-6, 6-2, in one of the classic marathon battles of his career, a fight every bit worthy of the journey to the edge of tennis immortality.

For nearly two weeks, Djokovic, the 34-year-old Serbian, has faced opponents who are younger, some by more than a decade. Several of them are bigger than he is, and seemingly far stronger. “I don’t want to wrestle with him,” Djokovic joked after beating Berrettini, his 25-year-old opponent, who is 6 feet 5 inches and more than 200 pounds.

And yet, Djokovic has left all of them not just defeated but also beaten, physically and mentally.

Holger Rune, a cocky 18-year-old from Denmark who took a set off him in their first round match, could barely walk by the middle of the third set, crippled by cramping that set in after 90 minutes of chasing Djokovic’s blistering forehands to every corner of the court.

Jenson Brooksby, a 20-year-old American, gave Djokovic all he could handle for a set-and-a-half in the fourth round. But within a few more games, a medical trainer was hovering at his chair, treating him for a hip injury he aggravated during the unmatched physical test that playing Djokovic has become.

The signature moments that night came when Djokovic followed up his on-the-run passing shots by staring down his 6-foot-4 foe.

He said he wanted Brooksby “to feel” his presence on the court, to understand that he was facing someone with no intention of showing any mercy, no matter how hobbled he might be.

“I wanted to wear him down,” he said of Brooksby, “and it worked.”

Battlegrounds are familiar territory for Djokovic, a lover of wolves, the product of a region that was war-torn during his childhood. One of his coaches, Goran Ivanisevic, a Croatian, said that the Balkans bred people who are desperate to prove their resourcefulness to a world that, as he put it, expected nothing from you.

For Djokovic, in so many ways, this U.S. Open has become a microcosm of a career marked not just by on-court battles with opponents, but by career-long fights against so many other forces in the game: fights against history, to do what no player has done before by taking the lead for most Grand Slam titles; against a tennisphere that so loved its binary duel between Rafael Nadal and Roger Federer and preferred not to have Djokovic crashing their Rafa-Roger lovefest. And there is the never-ending fight against the tens of thousands of tennis fans who come to his matches and roar for him to lose, caring little who the opponent is. (If Novak loses, Roger and Rafa win, their logic goes.)

The jeering jarred Djokovic on his first night here, as the crowd roared “ROOOOOON!” over and over and showed little appreciation for the start of Djokovic’s quest to achieve something that was considered too difficult in this era, with the three greatest-ever players competing all at once. He was terse in his on-court interview after Rune was finished. He abandoned his trademark gesture of pushing his heart out to the crowd. He was blunt in a post-match news conference.

“Obviously you always wish to have the crowd behind you, but it’s not always possible,” he said. “That’s all I can say.”

Two matches later, with the jeering reaching full throttle as Kei Nishikori tried to survive, Djokovic pulled off a series of impossible shots at the key moment of the third set. He put his finger to his ear after the first two, demanding the noise that finally surged behind him. After a third, he squinted and glared at the crowd as he sauntered to his chair for the changeover, sending a very clear message — I am going to beat him and I am going to beat you.

Always, though, the primary fight is on the court, and it is a battle he begins with a head start, because the players on the receiving end of his blows have convinced themselves that nothing less than the best match of their lives will suffice.

Berrettini looked as though he might have a shot Wednesday night in the quarterfinal.

Everything about Berrettini is big — his shoulders, his chest, the way he stalks the court and unleashes his booming serve and massive forehand, plus a Usain Bolt-like stride that sends him from the baseline to the net seemingly in three quick steps. For 80 minutes he took every blow Djokovic tried to land and gave it back, prevailing 7-5 in the first set, sending the teeming stadium packed with 23,000 fans into a frenzy.

Djokovic, though, was just getting started, raising his level to win the next three games and making sure Berrettini knew how much more he was going to need to come up with to prevail.

Within 40 minutes it was all even. Just before the three-hour mark, a few minutes past midnight, Djokovic was cruising toward the finish. Berrettini was still blasting 130-mile-per-hour serves, but Djokovic was somehow blasting them right back at his feet and onto the lines. When he ripped a crosscourt forehand that Berrettini could only watch whiz by, the big Italian slumped his shoulders and shook his head.

Once more, Berrettini said, Djokovic had made him sweat in a way other players never do, had taken his early shot square in the mouth when he lost the first set, just as he had to Berrettini in the Wimbledon final, and somehow come back to the court stronger.

“He takes energy from that set that he lost,” Berrettini said.

Berrettini had plenty of company in defeat. By midnight, when Djokovic had made it clear that his night would end just as all the others had, perhaps half the crowd had gone home. The only ones left chanted “Nole, Nole, Nole, Nole…,” inserting Djokovic’s nickname into the Ole chant.

Once more he had fought them all, and won.

“Five sets, five hours, whatever it takes,” he said in the bowels of the stadium, just before he left.

He did not need five hours to take apart Zverev on Friday night to get to the brink of tennis history, but he needed every moment of those five sets. By the end, Zverev was crumpling, his breathing heavy. His second serves had become 80 m.p.h. meatballs. An easy overhead turned into a wild error.

“Mentally he’s the best player to ever play the game,” Zverev said when it was finished. “In the most important moments I would rather play against anybody else but him.”

Another battle complete. Now there was only one more match.

“I’m going to treat the next match like it is the last match of my career,” Djokovic said before leaving the court.

After nearly two decades as a professional tennis player, the grandest battle of his career awaits.