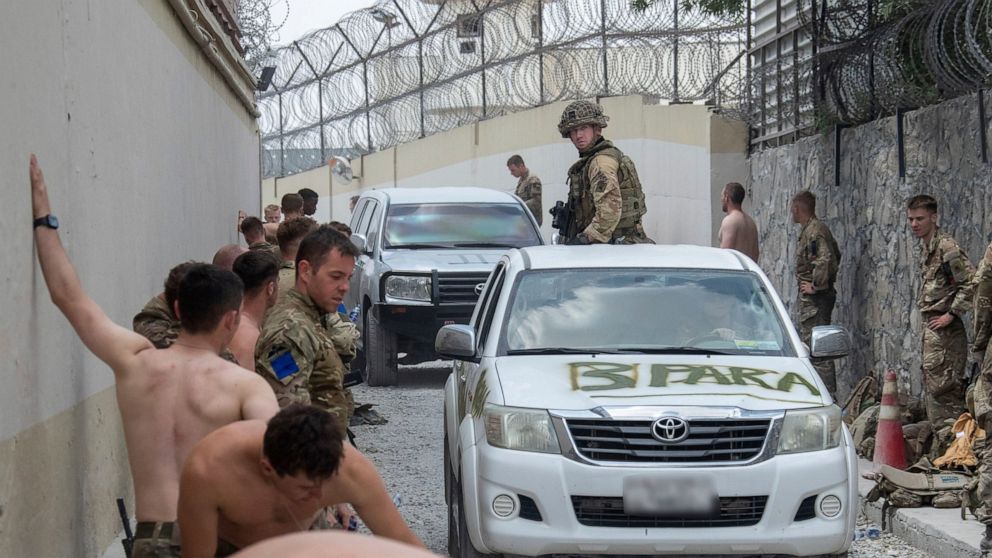 The last week has been a frantic mix of fear and frustration for people in west London with family members trying to get out of Afghanistan.

LONDON (AP) — For people with family members trying to get out of Afghanistan, recent days have brought a frantic mix of fear and frustration.

Explainer: Who is Kremlin critic Alexei Navalny?NOW PLAYING
Microsoft joins GM, Cruise self-driving partnership
Uganda accuses U.S. envoy of trying to subvert election
Spectacular Northern Lights over frozen forest and river
Drone footage shows Swiss vineyards under snow
In west London, many relatives are doing what they can: seeking advice and information from the Afghanistan & Central Asian Association. The organization was set up to support refugees 20 years ago, the same year a U.S.-led international force drove the Taliban from power after the 9/11 attacks.

Shah Hamdam, a 52-year-old who arrived in the U.K. in 1998 via Pakistan after fleeing Afghanistan when the Taliban were in control of the country, said he would do anything to get his sister, a television journalist, out of Kabul.

“She is begging,” Hamdam said. “She says, ‘Find a solution, find a way for me to get out of this situation at the moment.’ I try, I try, I knock every door to find a way to bring her over if possible.”

Hamdam hasn’t seen his sister since 2013 when he returned to Afghanistan for their mother’s funeral.

“I love her so much and I will do anything to bring her back with her family,” the father of four said.

With the U.S. still planning to have all its troops withdrawn from Afghanistan by Aug. 31, there’s a mad scramble to get out — and a corresponding sense of dread among Afghan families already abroad. Crowds of people clutching documents and sometimes stunned-looking children on Saturday were outside the gates of the international airport in Kabul, blocked by coils of razor wire.

The relatives of those who don’t make it out on a flight will be hoping that the Taliban prove true to their word and do not target those who assisted Western troops over the past 20 years.

Nilufar Nasrti, 47, is worried about her family because some members worked for the Afghan government. They are afraid to sleep at night, she said.

“Dangerous,” Nasrti said from London. “If the Taliban come into the house, they will kill you.”

Like other nations, Britain is trying to evacuate Afghan allies as well as its own citizens from Afghanistan, but with the U.S.-imposed deadline hovering into view, it’s a race against time. In addition to the 4,000 or so U.K. citizens, there are thought to be around 5,000 Afghan allies, such as translators and drivers, who are earmarked for a seat on a plane.

As of Wednesday, Britain had managed to get out over 2,000 Afghans and 300 or so U.K. citizens. Since then, Prime Minister Boris Johnson says the U.K. government has evacuated around 1,000 people a day, a lot of them Afghan citizens “to whom we owe debts of gratitude and honor.”

The British government has also announced a refugee settlement program that would allow up to 20,000 vulnerable Afghans, primarily women and children, to seek sanctuary in the U.K. in the next few years, including 5,000 this year. The total for this year is in addition to the Afghan allies who Britain is trying to evacuate now.

Critics argue the plan is not bold enough and does not come close to matching Britain’s share of the responsibility for Afghan workers.

Dr. Nooralhaq Nasimi, founder and director of the Afghanistan & Central Asian Association, is one of those who thinks Britain should be more ambitious. He said his group has received hundreds of emotional telephone calls from people in Afghanistan, including vacationing British Afghans caught up in the chaotic turn of events.

“Those people will face a serious humiliation, persecution and torture by the Taliban just because they were working with Western organizations,” Nasimi said.

He knows exactly what they are experiencing since he left Afghanistan with his young family when the Taliban were in charge in 1999.

For Qadria Saeedi, a 38-year-old outreach worker who has helped Afghan women settle in the U.K., the fall of Afghanistan to the Taliban conjures up particularly awful memories. She remembers the horrors of life under the Taliban’s first incarnation in the 1990s before she left the country at 19.

“I’m fully stressed right now,” said Saeedi, who is particularly worried about her brother and sister in Afghanistan. “Because it is really hard when I remember their faces (of Taliban fighters) and the way they dress up. It’s really scary, it’s horrible.”

Saeedi had promised her father that she would go and visit him in Afghanistan this year.

“Unfortunately, I don’t think I will see him again,” she said.