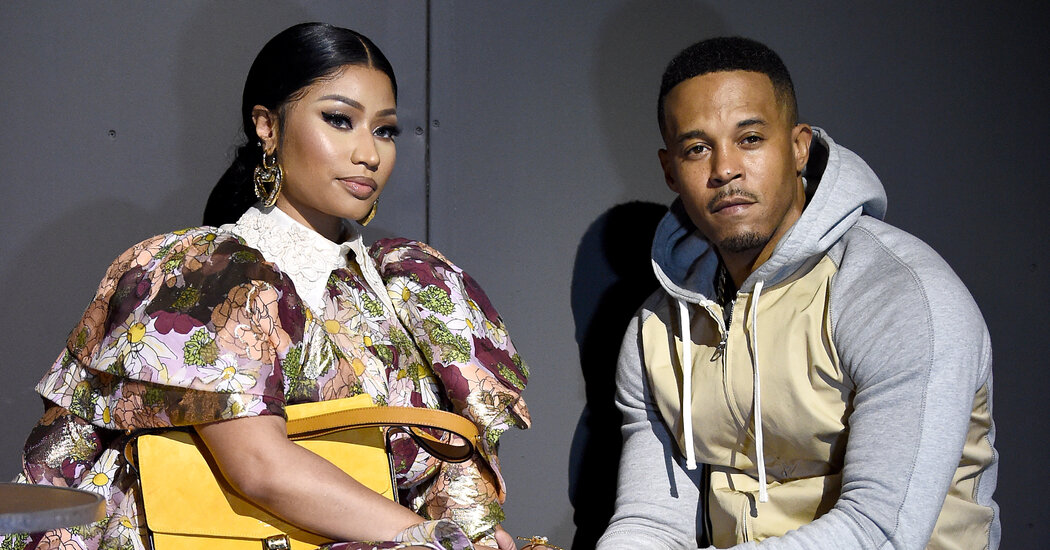 A woman who accused the rapper Nicki Minaj’s husband, Kenneth Petty, of sexual assault during high school filed a lawsuit on Friday against the couple, alleging that they harassed and intimidated her while trying to convince her to recant her account.

The case dates back to 1994, when Jennifer Hough, then 16, reported to the police that Mr. Petty — a 16-year-old she had known growing up in Jamaica, Queens — had raped her after leading her into a home at knife point, the lawsuit says. Mr. Petty was arrested that day and was charged with first-degree rape, and subsequently pleaded guilty to attempted rape, said Kim Livingston, a spokeswoman with the Queens district attorney’s office. He served about four and a half years in prison, according to inmate records.

According to the lawsuit filed in the U.S. District Court for the Eastern District of New York, Ms. Hough, 43, and her family members started to receive communications from people claiming to be connected with Ms. Minaj and Mr. Petty shortly after Mr. Petty was arrested last year for failing to register as a sex offender in California. The lawsuit alleges harassment and witness intimidation, as well as intentional infliction of emotional distress by Ms. Minaj and Mr. Petty, and seeks unspecified damages. It also alleges sexual assault and battery against Mr. Petty, referring to the mid-90s case.

A representative for Ms. Minaj did not immediately respond to requests for comment. A lawyer for Mr. Petty, Michael Goldstein, declined to comment on the lawsuit.

The lawsuit says that an intermediary offered Ms. Hough $20,000 in exchange for signing a prepared statement recanting the accusation. At one point last year, the lawsuit says, Ms. Minaj called Ms. Hough, saying that she had heard Ms. Hough was willing to “help out”; days later, it says, Ms. Hough and her family members received an “onslaught of harassing calls and unsolicited visits” from people she believed to be associated with the couple.

Ms. Hough “has not worked since May of 2020 due to severe depression, paranoia, constant moving, harassment and threats from the defendants and their associates,” the lawsuit says. “She is currently living in isolation out of fear of retaliation.”

According to the lawsuit, Ms. Hough was on her way to school on Sept. 16, 1994, when she ran into Mr. Petty, a boy she knew from the neighborhood. The lawsuit says that Mr. Petty held a knife at her back as he led her to a house around the corner, where Ms. Hough said he raped her. The suit says that Ms. Hough escaped, ran to her high school and told security guards, who called the police.

In an interview, Ms. Hough said that as her case was prosecuted, she faced harassment and retaliation in the neighborhood, prompting her family to force her to attend a court hearing for Mr. Petty and request that the charges be dropped — a request that was denied. At the time, the suit says, Mr. Petty had already accepted a plea deal.

Ms. Hough said in an interview that she left New York City after the ordeal, and for years, it remained in the past: “I didn’t think it would be something that would come back and slap me in the face 20-something years later.”

But in 2018, Ms. Minaj — a chart-topping rapper with a fiercely loyal social media following — posted about her relationship with Mr. Petty on Instagram, and questions about his status as a sex offender surfaced.

Ms. Hough said in an interview that she had spoken to YouTube bloggers to defend herself and respond to an Instagram comment from Ms. Minaj that stated that Ms. Hough and Mr. Petty had been in a relationship at the time of the assault and that Mr. Petty was younger than Ms. Hough. (They were never in a relationship, and they were the same age, according to the lawsuit.)

After Mr. Petty was arrested in 2020, Ms. Hough reconnected with a childhood friend from Queens, the lawsuit says, and told him she “wished it could all just go away forever.” Ms. Hough said that the friend replied, “I can make that happen.”

The suit says that a few days later, the friend told Ms. Hough that Ms. Minaj had asked for her phone number, and the rapper later called her and offered to fly Ms. Hough out to Los Angeles or fly her publicist out to Ms. Hough; Ms. Hough said she declined and told the rapper, “I need you to know woman to woman, that this happened.”

The lawsuit says there were then a series of encounters where Ms. Hough or her family members were offered inducements if she would recant: $500,000 at one point, $20,000 at another, with a proposed bonus that Ms. Minaj would send birthday videos to Ms. Hough’s daughter. Ms. Hough said she declined.

Ms. Hough said in the interview that she never expressed interest in a bribe and was adamantly against recanting her story.

Ms. Hough said in the interview that at one point she told the intermediary that the $500,000 offer was “not good enough.” She said she had been trying to deflect the conversation, not to express interest in a bribe. Tyrone Blackburn, a lawyer representing Ms. Hough, said Ms. Hough’s comment was an effort to dissuade the intermediary from thinking she would accept anything.

At one point last fall, the suit says, Ms. Hough was contacted by a lawyer for Mr. Petty, who asked her about a recantation letter. In response to threatening calls and her own growing paranoia, the suit says that Ms. Hough moved three times in one year.

“I feel like I’m living in secret,” she said in the interview, “like I can’t tell people my exact location.”