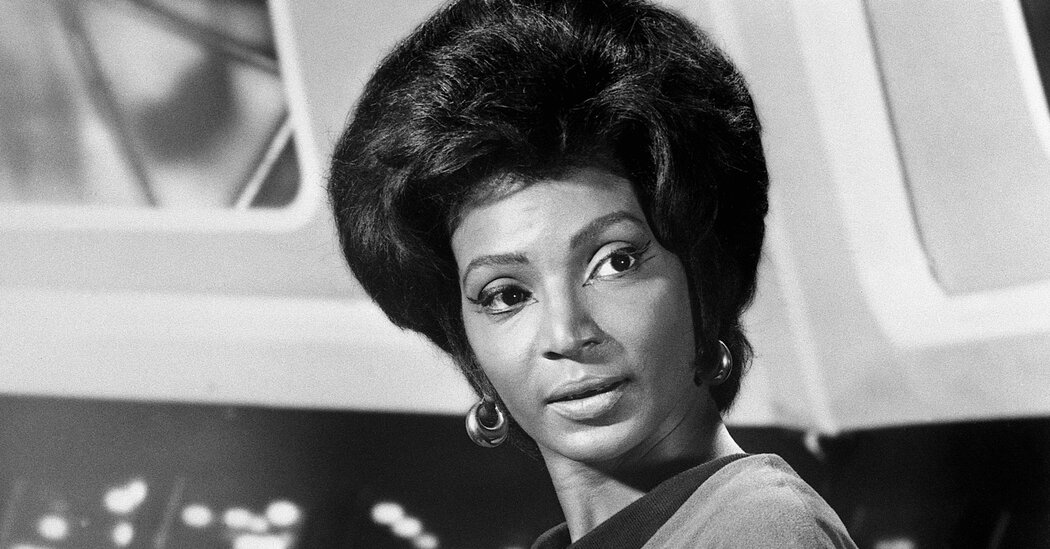 A grinning Spock greets Lieutenant Uhura with a line of Byron at one point in their decades of shared “Star Trek” adventures. Now, this was way, way back when Leonard Nimoy’s Spock occasionally grinned, but walk with me here:

Even the alien knew a queen when he saw one.

And what a queen. Those boots. That dress. That eye makeup. That glorious voice.

Nichelle Nichols, the woman who brought Uhura to life, died last week at the age of 89. Her contribution to the collective imagination of America — whether on the television screen or in her real life — cannot be overstated.

With not a hair out of place and fabulous earrings dangling, she was Communications Officer, fourth in command of the Federation starship U.S.S. Enterprise in the 23rd century.

She was the embodiment of a declaration splashed across billboards decades later: There Are Black People in the Future.

When “Star Trek” debuted on NBC in September 1966, Uhura’s very presence hit the audience like a thunderbolt. At the time, Black people were in a very literal and ultimately existential fight for autonomy of their bodies and souls. It was the era of marches, freedom rides and sit-ins. Malcolm X was already dead. The Rev. Dr. Martin Luther King Jr. was still preaching.

Black people of all abilities and professions were still being relegated to the corners of restaurants, hotels and offices. Black women, if ever mentioned in the larger media, were portrayed as either loud, undignified troublemakers or genial, overweight maids and nannies who supposedly delighted in doting on white folk’s children.

Out of this madness, Uhura appeared.

A vision in red and black. Beautiful, smart as hell and not interested in nobody’s nonsense.

Her name means freedom in Swahili. And for a generation, she symbolized that: the freedom to be seen and appreciated for your talents, rather than being seen as a liability because of your color.

I am too young to have seen “Star Trek” on NBC; I wasn’t born until the 1970s. I came to the franchise when I was in college in Philadelphia in the early 1990s. Philly TV was a Trek haven at the time: “Star Trek: The Next Generation” and “Star Trek: Deep Space Nine” were in first-runs, the older episodes of “Next Generation” were already in syndication five nights a week, and the original series was on every Saturday afternoon.

At first, I mainly complained about what Uhura didn’t do. She wasn’t one of the Big 3 (Kirk, Spock and McCoy), so she was rarely in a spotlight role. This was true of women in general in the original series, of course, and that didn’t get thoroughly fixed as a franchise problem until “Star Trek: Discovery,” decades later. (Yes, I know the U.S.S. Voyager had a woman at the helm. And I also know that her command was questioned and challenged far more often than any captain’s of that time. Nobody dared rolled up on Jean-Luc Picard like that. Capt. Kathryn Janeway was done wrong.)

As I went into the work force myself, I acquired a healthier appreciation for Uhura. I learned that oftentimes, you just have to show up prepared and do your job and not expect to be the one out front or the one who’s patted on the back. Be prepared to take the helm if you have to, but don’t make a big deal about it. Run your business, not your mouth.

And I thought about what Nichols must have experienced over the years, being feted for being a part of this hopeful, exciting vision of the future yet still having to fight for screen time and inclusion in that 1960s present. (The discrepancy was not lost on her; as she recalled many times, she planned to leave the series after the end of the first season and return to Broadway until “her biggest fan” — a preacher of some renown named Martin Luther King — talked her out of it.)

Once the show ended, Nichols continued to be a catalyst for inclusion. In the 1970s, she went on a nationwide tour of universities and professional organizations, encouraging the country’s top women and people of color who were scientists, engineers and mathematicians to apply for the astronaut program. And they listened.

As a result of her tour, people like Sally Ride, Judith Resnik, Frederick Gregory and Ronald McNair all became astronauts.

(I may have well tried out too, Ms. Nichols, as I grew up loving stars and planets and nebulae, even though I couldn’t see much from my apartment in Brooklyn. But while the body was ready, the calculus was weak. I had to traverse other roads.)

In a 2011 interview with Nichols, the astrophysicist Neil deGrasse Tyson said that thanks to her efforts, the space shuttle program was the first American astronaut program that better reflected America.

Yes, the astronauts are the ones who took the tests, trained their bodies, made the sacrifices and flew among the stars. But everything that flies has wind beneath its wings.

Nichols helped provide that wind, first to a television show and a concept that grew into a multimillion-dollar global franchise, and then to the real-life space organization that will maybe, eventually, figure out how to build that fictional Starship Enterprise.

Her presence and her encouragement let us know that we were all there in the future. Don’t worry about not being there. Of course you’re there. Just be ready to work it when it’s your turn.

She shifted what we as a people thought was possible. There is no greater gift a performer can give.

If there is an afterlife, I hope that Nimoy takes a few minutes to regale Nichols with poetry again. And that this time, they both spend some time grinning.