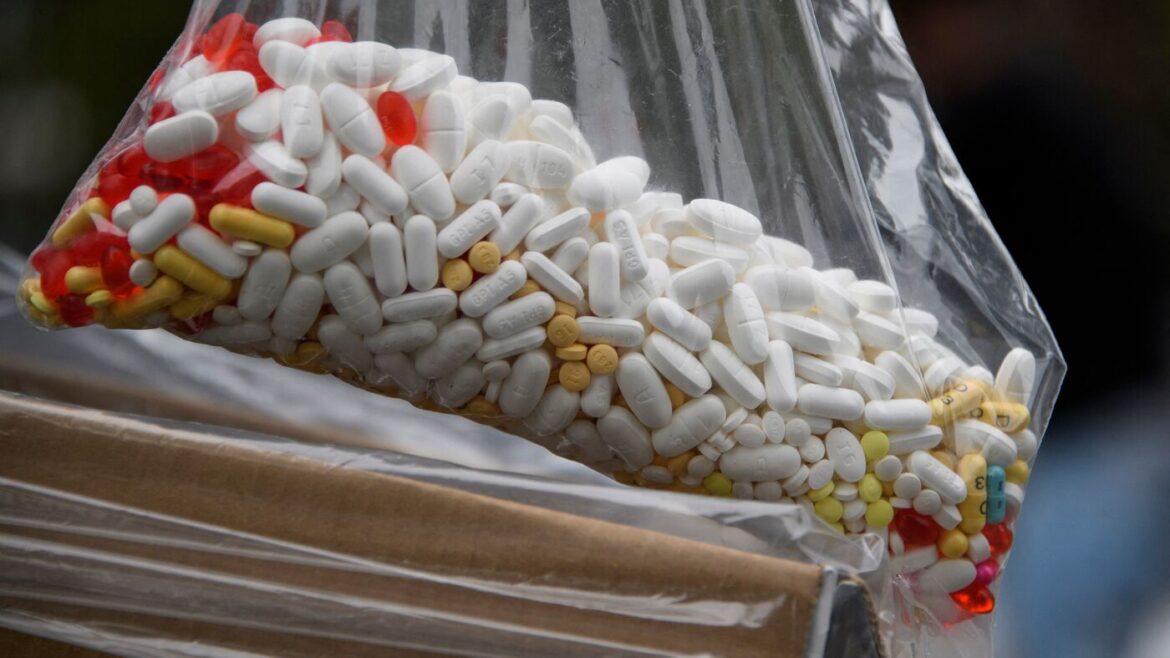 A bag of assorted pills and prescription drugs is dropped off for disposal during the Drug Enforcement Administration’s National Prescription Drug Take Back Day on April 24, 2021 in Los Angeles. 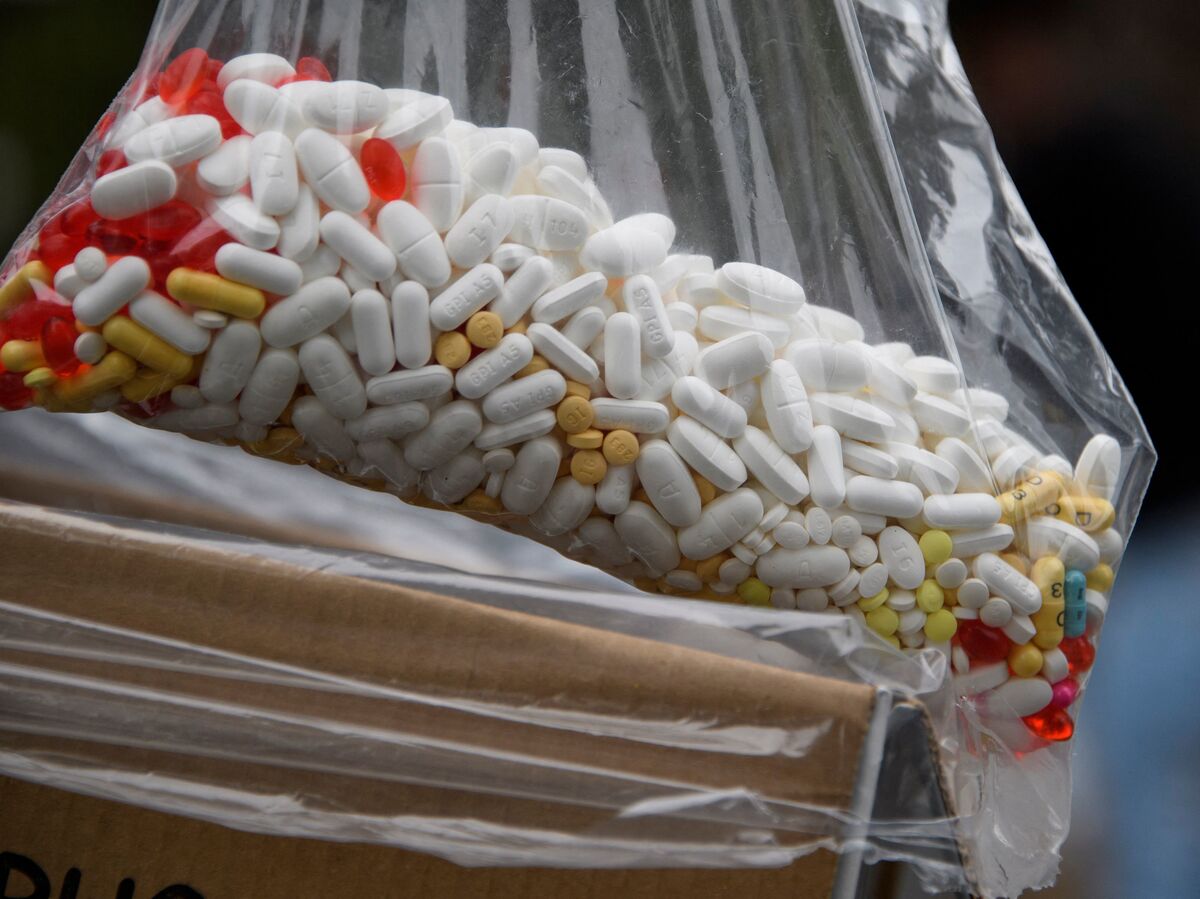 A bag of assorted pills and prescription drugs is dropped off for disposal during the Drug Enforcement Administration’s National Prescription Drug Take Back Day on April 24, 2021 in Los Angeles.

It’s estimated that more than 107,000 people in the United States died due to opioid overdoses in 2021. Washington Post journalist Scott Higham notes it’s “the equivalent of a 737 Boeing crashing and burning and killing everybody on board every single day.”

In the new book, American Cartel, Higham and co-author Sari Horwitz make the case that the pharmaceutical industry operated like a drug cartel, with manufacturers at the top; wholesalers in the middle; and pharmacies at the level of “street dealers.” What’s more, Higham says, the companies collaborated with each other — and with lawyers and lobbyists — to create legislation that protected their industry, even as they competed for market share.

“Most people think it’s the political parties that run the show or it’s the White House that runs the show, but it really is the companies that run the show,” Higham says. “People were dying by the thousands while these companies were lobbying members of Congress … to pass legislation and to lobby members of the Department of Justice and try to slow down the DEA enforcement efforts.”

Higham says that big pharma fought to create legislation that would limit the DEA’s ability to go after drug wholesalers. The efforts were effective; more than 100 billion pills were manufactured, distributed and dispensed between 2006 and 2014, during the height of the opioid epidemic. Meanwhile, both federal and state DEA agents are frustrated by the ways in which their enforcement efforts have been curtailed. 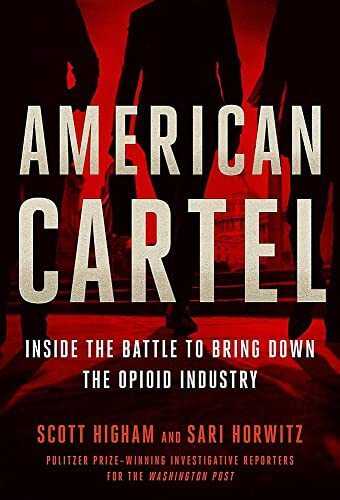 They started out by doing what any investigator would do. And that is you start out at the lowest levels of an organization. And so the lowest levels of this organization were the doctors. And there’s a plethora of corrupt doctors in this country who were willing to write prescriptions for drugs, for cash, for sex, for all kinds of things, but mostly for cash. They realized that if they kept arresting doctors, that they could do that all day long. Every time they took down one doctor, another one would pop up. So then they moved up to the pill mills, which were nothing more than basically criminal fronts for drug dealers. And then they realized they could knock those over all day long.

A lot of these [pill mills] were in strip shopping centers, mostly in South Florida, because the regulations were so lax down there. And people were traveling from all over the country down to South Florida, where they’d go into these pill mills. The doctor would ask a couple of cursory questions. They would say, “I have back pain.” They would write them a script for oxycodone or hydrocodone, and they’d be on their way. And word quickly spread around the country that this is where you could go to get your prescriptions, and then you would take those and you would fill them in pharmacies all across the country. And so these outposts, it was kind of like the Wild West down there. And parking lots were just filled with drug users and drug dealers. It was a crazy, crazy time. And the DEA realized that there was no way that they could just rein them in, because it took a long time to investigate these operations and then prosecute them. And then and while they were doing that, five more would open up and 10 more would open up. It was like a cancer. And they realized that what they needed to do was really move up the food chain and go to the drug distributors and the manufacturers.

There are a couple of trade organizations that are at the center of the opioid industry, and one of them is called the Healthcare Distribution Alliance. It is a little known trade group, it is incredibly powerful in Washington, and it represents the three largest drug distributors in America: McKesson, Cardinal Health and AmerisourceBergen, along with a host of smaller regional organizations. So they’re like most traded organizations, they’re a lobbying organization. They contribute heavily to members of Congress. But in this case, they helped the industry avoid accountability. …

A lot of people believe that the Sacklers and Purdue [Pharma] are solely responsible for the epidemic. And we realized, according to the data, that that would be wrong and that a lot of companies jumped into this emerging market, companies that we all know, household names like CVS, Walgreens, Walmart, Johnson & Johnson, and others that we never knew existed. Like Mallinckrodt, a company that’s been in existence for 100 years. They produce 30 times the amount of pills that Purdue Pharma produced and their conduct was so egregious that the DEA once called them a drug kingpin.

On the 2016 Ensuring Patient Access and Effective Law Enforcement Act, which limited the DEA’s ability to go after drug distributors

What the legislation did is it removed from the DEA’s arsenal one of its most potent weapons. It’s called the “immediate suspension order.” An immediate suspension order immediately shuts down the operations of a drug warehouse, a drug company, preventing them from sending any more narcotics downstream until there’s a court hearing. And it was basically removed at the height of the epidemic by changing a couple of words in the law that had been on the books since the 1970s.

Under the old law, you had to prove that a company’s behavior was causing an imminent danger to a community. And “imminent” is the key word here. What the industry did is they changed that word from “imminent” to “immediate.” So it was easy for the DEA to show that a drug company was causing imminent danger to a neighborhood or to a community by its conduct or misconduct. But to show that a company based in Upstate New York or in Ohio or in Arizona was causing an immediate danger to a community 1,000 miles or 2,000 miles away was a bar that was just too high. And the drug industry knew that the DEA would never be able to meet that bar. And since that law was passed, there’s not been one immediate suspension order issued by the Drug Enforcement Administration, because they just can’t meet that burden of proof.

On the lawsuit against big pharma launched in 2018 by a coalition of lawyers and investigators on behalf of thousands of counties, cities and Native American tribes

There is this young lawyer named Paul Farrell in Huntington, West Virginia, and he came up with this novel legal theory that these companies may be in violation of public nuisance statutes because they were flooding the communities with so many drugs. And so he set out to put together a group of lawyers, because he’s just like a sole practitioner. He doesn’t have a lot of money. And to wage these kinds of battles, you need a lot of lawyers and you need a lot of money. And so he started reaching out to some of the biggest law firms in America, plaintiffs’ law firms. One law firm represented the states against the tobacco industry, for instance, a massive law firm run by Joe Rice. There’s another law firm run by a guy named Mark Lanier, who is probably one of the most successful trial lawyers in America and who has won huge verdicts, including a $2 billion verdict against Johnson & Johnson in the talcum powder case. … [Farrell’s] really passionate because he’s seen all of these people dying in his community. And [the lawyers in the other big firms] start to see that there is some value in this legal theory and that they may be able to move against these companies by filing public nuisance lawsuits.

Johnson & Johnson and the big three drug distributors have settled for $26 billion, which sounds like a lot of money, and that money is going to go to drug treatment programs, etc., in some of these communities. But on the day that that settlement was announced, the share prices of all those companies rose by an average of 3%. So what does that tell you about how these fines and these settlements are affecting the bottom lines of these companies? It’s not having an impact. … But when you talk to the families [of people who have died], they say: Where is the accountability? Where is the justice? This money, it’s almost like the cost of doing business and it’s not affecting them. They’ve not apologized. They’ve not said they’ve done anything wrong. And right now there are 40,000 Americans who are in jail on marijuana charges. And not one executive of a Fortune 500 company involved in the opioid trade has been charged with a crime.

Right now there are 40,000 Americans who are in jail on marijuana charges. And not one executive of a Fortune 500 company involved in the opioid trade has been charged with a crime.

It’s very difficult now to get pain medication and it’s almost impossible to find it on the black market. And so what this has basically done is created an enormous market for the Mexican drug cartels. They have seen a ready and willing market north of the border, millions of people who have been addicted to opium. And at first, the cartels started sending heroin into the United States. It didn’t really catch on all that much. I mean, heroin’s a pretty dirty drug. A lot of people don’t like injecting drugs. And then the cartels figured out that fentanyl is a much cheaper, easier drug to manufacture. It’s much easier to smuggle. And people who are hardcore users prefer fentanyl. It’s 50 times more powerful than heroin. It’s exactly the same high, except more powerful. And you stay high longer. It’s a lot cheaper. You don’t come down as hard.

And so what the cartels started to do is they started to manufacture blue oxy 30 pills with an “M” on one side and a 30 on the other, and they’re counterfeit pills. They look just like Mallinckrodt’s pills, except they’re fentanyl, and they’re shipping them by the millions through the ports of entry on the southern border. And that is the pill that is now becoming the most predominant pill on the street, except it’s not Mallinckrodt, it’s not oxycodone, it’s fentanyl, and it’s killing people like opioids have never killed people before. … The vast majority of [overdose deaths in 2021] were due to fentanyl and the increases in the Black community and the Native American community are off the charts because of what’s happening …. particularly in inner cities [of] Philadelphia, Baltimore, New York, L.A., Chicago. These used to be kind of heroin towns, and heroin has been basically replaced by fentanyl. And people are overdosing by the thousands.

Lauren Krenzel and Seth Kelley produced and edited this interview for broadcast. Bridget Bentz, Molly Seavy-Nesper and Laurel Dalrymple adapted it for the Web.