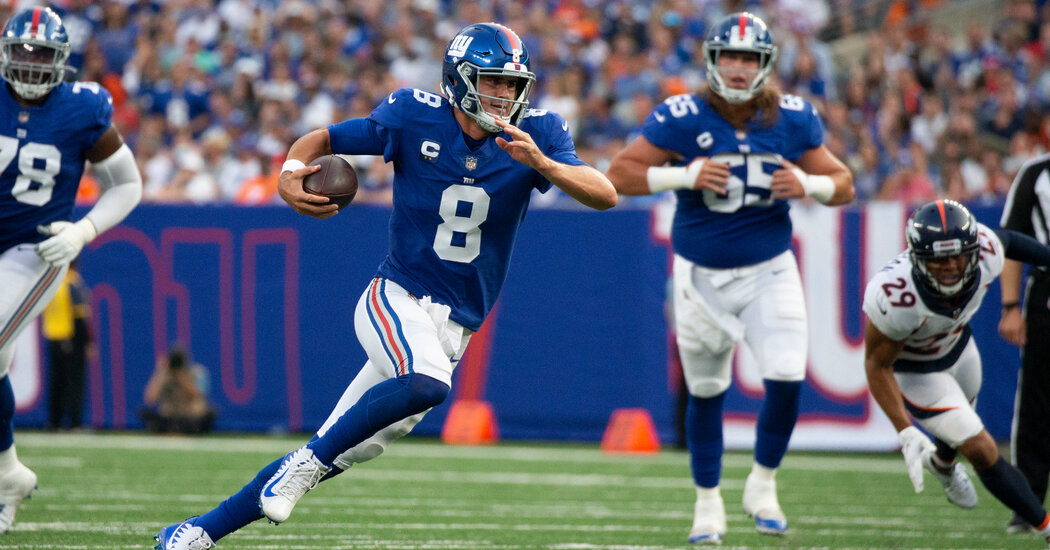 Don’t expect Tom Brady to need a comeback from a 28-3 deficit this time. Four seasons have passed since his Super Bowl LI win, but if the Falcons (0-1) couldn’t stop the Eagles’ second-year quarterback Jalen Hurts from throwing for three touchdown passes last week, then they will surely struggle with the Bucs (1-0) and Brady, whose cast of receivers is arguably the best of his 22-year career. Oddsmakers expect this to be the largest mismatch of the weekend, and rightly so. Pick: Buccaneers -13.5

The Browns (0-1) spent all off-season preparing for last week’s rematch against the Chiefs — and a run at an A.F.C. championship — only to fail to keep pace because of self-inflicted mistakes. Whatever frustrations Cleveland has from letting that game slip through its fingers should find an outlet in the Texans (1-0). Receiver Odell Beckham Jr. will again be out as he recovers from off-season knee surgery. But the Browns don’t need him to beat a Houston team with a roster considered one of the least talented in the league. Pick: Browns -12.5

In Week 1, the Bengals rookie receiver Ja’Marr Chase, who had a shaky preseason, reminded everyone that he can indeed fulfill his job description and catch a football. He collected five passes for 101 yards and a touchdown against the Vikings. The Bears’ secondary is arguably their weakest unit, and it allowed Rams quarterback Matthew Stafford to throw for 321 yards last week. If the Bears defense allows a similar performance, neither Andy Dalton nor Justin Fields at quarterback would be enough to compensate. Pick: Bengals +3

Patriots running back Damien Harris’s fourth-quarter fumble in the red zone ended a final drive by the rookie quarterback Mac Jones, and New England (0-1) fell to Miami, 17-16, last week. The score should not be so close against the Jets (0-1), who allowed six sacks of their rookie quarterback, Zach Wilson, last week. Blocking for Wilson becomes harder this week without left tackle Mekhi Becton, who is recovering from a dislocated kneecap. One first-year passer will start his career 0-2, and even if the Jets adjust their protection, it will probably be Wilson. Pick: Patriots -5.5

Eagles quarterback Jalen Hurts diced up the Falcons’ meager defense, throwing for three touchdowns and 265 yards, while escaping with only one sack. News flash: The 49ers (1-0) are not the Falcons. In a Week 1 win over Detroit, the San Francisco defense again looked like the throttling unit of 2019, sacking Jared Goff three times and pressuring him into an interception that was returned for a touchdown. San Francisco’s starting running back, Raheem Mostert, had season-ending knee surgery, but his replacement, Elijah Mitchell, played well and should continue to do so. Hurts’s first true test of 2021 will be too tough to pass. Pick: 49ers -3.5

Urban Meyer started his tenure as an N.F.L. coach poorly, with a Jaguars loss against the ransacked Texans roster. His second outing will only be tougher, as he tries to advise the rookie quarterback Trevor Lawrence on facing a strong Broncos defense led by linebacker Von Miller, who posted two sacks in his return from the ankle injury that sidelined him in 2020. Denver (1-0) will be without receiver Jerry Jeudy, who is expected to miss at least four weeks because of an ankle sprain. But the Broncos’ defense should be able to contribute some scoring of its own against a young passer. Pick: Broncos -6