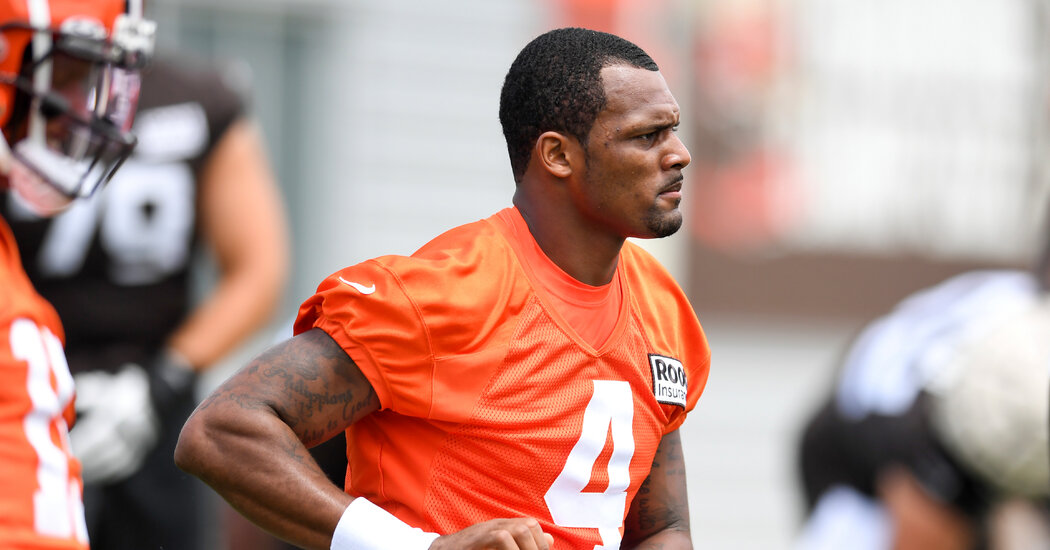 The N.F.L. appealed the six-game suspension of Cleveland Browns quarterback Deshaun Watson on Wednesday, according to a league spokesman.

The league challenged the penalty issued Monday by a third-party disciplinary officer as a result of a hearing over accusations that Watson had engaged in sexually coercive and lewd behavior toward two dozen women he hired for massages. The N.F.L. is arguing for an indefinite suspension with the option of reinstatement after a year, according to a person with knowledge of the league’s appeal who was not authorized to speak publicly.

The league also recommended a fine and treatment for Watson and cited concerns over his lack of remorse in the brief it filed Wednesday, the person said.

The union, which declined to comment, has until the close of business on Friday to respond.

Following a process agreed upon in the collective bargaining agreement between the league and the N.F.L. Players Association, the appeal will be heard by Commissioner Roger Goodell or a person of his choosing. The league did not immediately say who would oversee the appeal, which will be heard on an “expedited” basis.

There is no set timeline laid out in the C.B.A. for a ruling to be made.

Sue L. Robinson, the retired federal judge jointly appointed by the N.F.L. and the players’ union to oversee the disciplinary hearing, found that Watson violated the league’s personal conduct policy by engaging in unwanted sexual contact with another person, endangering the safety and well-being of another person and undermining the N.F.L.’s integrity. She suggested in her 16-page report that Watson’s conduct, which she called “predatory” and “egregious,” might have deserved a stricter penalty but that she was limited by the league’s policies and past record of discipline.

Watson has denied the accusations against him, and two Texas grand juries declined to indict him. He settled all but one of the 24 lawsuits filed against him by women he hired for massages. Jimmy and Dee Haslam, owners of the Browns, said they would “continue to support” the quarterback to whom they awarded a five-year, $230 million fully guaranteed contract in March.

Robinson said in her report that Watson’s denials did not appear credible and that he showed no remorse.

The players’ union said before Robinson’s decision that it would not appeal, but after the suspension was announced on Monday the N.F.L. said it would review her findings and “make a determination on next steps” within the three business days the C.B.A. allows for challenges.

The six-game suspension was criticized by Tony Buzbee, the lawyer representing most of Watson’s accusers, as well as experts in sports law and advocates for sexual abuse victims. The league had argued to Robinson that Watson deserved at least a full-year suspension while the union had fought for a lesser penalty.

Robinson said that her decision to suspend Watson for six games was based on the penalties the league had meted out in other cases involving gender-based violence.

The league began its investigation of Watson in March 2021, when Ashley Solis, a licensed massage therapist in Houston, filed the first lawsuit against him. The women said that he assaulted or harassed them during massage appointments in 2020 and 2021, when Watson played for the Houston Texans. In a brief filed to Robinson, the league wrote that Watson had “used his status as an N.F.L. player as a pretext to engage in a premeditated pattern of predatory behavior toward multiple women.”

Watson’s case was the first handled under a new process established in the 2020 C.B.A. By assigning an arbitrator to oversee the review of facts and decide on the initial penalty, the revision aimed to stem criticisms of Goodell’s outsized and sometimes capricious power in the disciplinary process.

If Robinson had found that Watson did not violate the personal conduct policy, there would have been no discipline and neither side could appeal. But she concluded that there was enough evidence, including the accounts of four women that she said were “substantially corroborated,” to support multiple violations of the policy by Watson.

According to the C.B.A., decisions by Goodell, or his designee, are “full, final and complete” and binding on all parties, including the player.

The union may challenge the league’s appeal in federal court, as it has done over player conduct decisions in the past. One noteworthy instance came in 2015, when quarterback Tom Brady challenged his four-game suspension in the so-called Deflategate scandal. A district court judge sided with Brady, saying that Goodell exceeded his power by suspending the quarterback for his role in an alleged scheme to take air out of game balls to improve their grip. Goodell’s decision, however, was upheld in 2016 by a federal appeals court panel that affirmed his broad authority to discipline players.

Michael LeRoy, an arbitrator who teaches labor law at the University of Illinois, said that the C.B.A.’s language made an “emphatic point” about the finality of the process agreed to by both sides.

“I think it’s virtually airtight against judicial overturning,” LeRoy said. “Courts are highly deferential to the fact findings as well as the conclusions with respect to a contractual violation or not. So I think Watson is just going to be tilting at windmills if he challenges this in federal court.”

Watson can continue to practice with the Browns during training camp as the appeal continues.