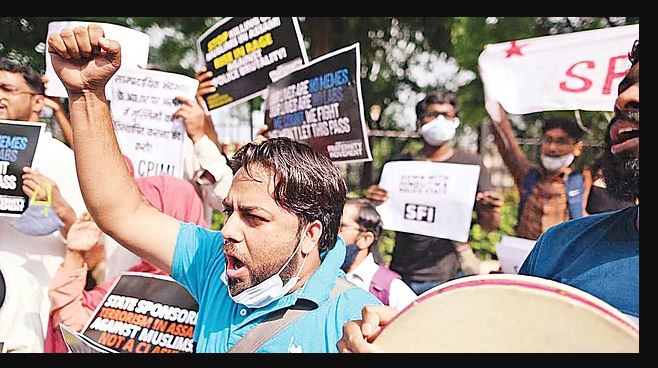 The Muslims living in Assam are either residents of the region or have come from outside – the politics of the state has been revolving around it since the independence of India. This controversy also became prominent in the 2021 assembly elections. For the time being, the controversy is coming to an end with the recommendation of a panel constituted by the state government to look into the matter and the Chief Minister’s statement in this regard.

On April 21, the panel submitted a report to Assam Chief Minister Himanta Bishwa Sharma. There they recommended a census to recognize the Muslims of Assam as a separate entity and indigenous community and to include them in the national list.

The panel, comprising seven subcommittees set up by the state government, recommended enlisting Muslims in Assam and setting up a separate department or authority to issue identity cards to each. The aim is to ensure that Bengali-speaking Muslims in Assam are not identified as ‘illegal immigrants’ or ‘Bangladeshis’. The panel recommended that five groups of Muslims from Assam be recognized as natives of Syed, Goria, Moria, Desi and Julhad.

Accepting their recommendation, Chief Minister Bishwas Sharma said that Muslims are among the natives of the state and their existence is being acknowledged by the state government. These recommendations aimed at the socio-economic development and empowerment of the native Muslims will be implemented. Short, medium and long term plans will be taken for this.

However, a lawyer in the Assam High Court, who did not want to be named, said many Muslims living in the state have to prove their citizenship under the Indian Register of Citizens (National Register of Citizens). Those whose names are not in the civil registry have been and still are the victims of the ultimate harassment. The question is whether the cases against them will be dropped after this announcement.

In this regard, a professor of Assam University said, the matter is very sensitive and involves the lives of about one crore people. He does not understand how a cabinet sub-committee can take a decision on such an issue without informing anyone and the government can accept it. Ordinary people do not have a clear idea about how the government came to a decision on the issue. He thinks that after the failure of the civil registry issue, an attempt is being made to create a new problem.

The main opposition party, the Congress, or the All India United Democratic Front, a party representing the Muslim community, has not yet commented.