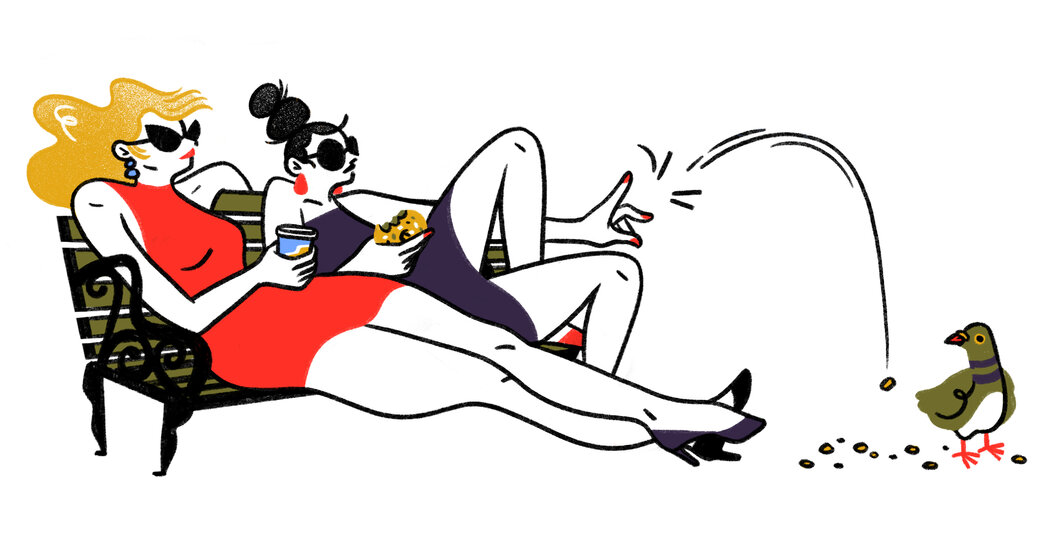 “Charm,” a professor once told me, “is not nothing.” At the time, I was 21, hoping to write and about to move to New York City: I now see this was practical advice. Isa, the heroine of Marlowe Granados’s first novel, “Happy Hour,” requires no such counsel. Twenty-one and newly arrived in New York, Isa is equipped with minimal cash but charm to spare. It’s her stock in trade — more so than the 60-odd articles of summer clothing she’s got stuffed in her suitcase and plans to wear or sell. Charm is the magic that will bear her summer aloft, and while 21 may be “an unserious age,” as she puts it, she’s keenly aware of charm’s value. Her creator is, too. Confident, charismatic and alive to the pleasure of observation, the voice Granados conjures in “Happy Hour” is a testament to the power of charm on the page.

Isa’s plans for the summer of 2013 have brought her from London to a sublet in Bed-Stuy, where she and an old friend named Gala have arranged to share a room and a bed. Since they lack the papers necessary for proper stateside jobs, their employment prospects are somewhat circumscribed. Isa and Gala sell used clothes from a stall at a weekend market, cultivating “a shopping experience” if not a brisk trade. They make $50 a day for the week they spend as members of an in-studio TV audience, and $100 a night for the two weeks they spend bringing “Downtown Flavor” to a Meatpacking District club. They dabble in life-modeling, babysitting and reselling books at the Strand. They consider an opportunity as foot-fetish models but balk at the upfront investment in pedicures. As a pair, they are thrifty, stylish and nimble; they choose going-out clothes with an eye for what will allow them to scale a fence. Their meals are hot dogs and eggs from Throop Food Market, or else caviar-heaped hors d’oeuvres.

“Everyone kept asking us what we were doing in New York, what we were working on and what our general story was,” Isa says. “When Gala told them we were doing ‘absolutely nothing,’ she was met with raised eyebrows. They would add, ‘Do you have internships at magazines?’”

“Absolutely nothing” isn’t wrong — Isa and Gala face the ongoing difficulty of killing time without spending money — nor is it quite right. After all, “I am always learning,” Isa explains, and she maintains a thorough record of that education in her diary. Of a night at a dingy bar with drunk intellectuals, she writes: “These men spoke as though a revolution were going to start right from that very bar — as though what they did was necessary and vital to the world. I can hardly understand how they came to think that way. From what I gather, they write essays in magazines that have small circulations and publish biannually.” Being underestimated is to Isa’s advantage. “I am comfortable saying I don’t do anything because that way people are always surprised by me.”

Granados’s Isa evokes such bygone young women on the make as Elaine Dundy’s Sally Jay Gorce in “The Dud Avocado.” Somehow, though, the voice that kept coming to mind as I read was Kay Thompson’s Eloise. While that figure has now been merchandised and rereleased into franchise oblivion, the original character was a small comic masterpiece: resourceful, unruly, at once worldly and innocent, with a certain loneliness flickering into view from time to time. Isa is a worthy heir to her anarchic spirit (an heir who prefers pupusas and halo-halo in Queens to gugelhopfen at the Palm Court). By the end of her summer in the city, she has a sharpened sense of where charm can take her — of where she might like to go and how she might go about getting there. “You can’t buy charm, but you can certainly spend it,” she observes as the book nears its close. “You can certainly withhold it too.”