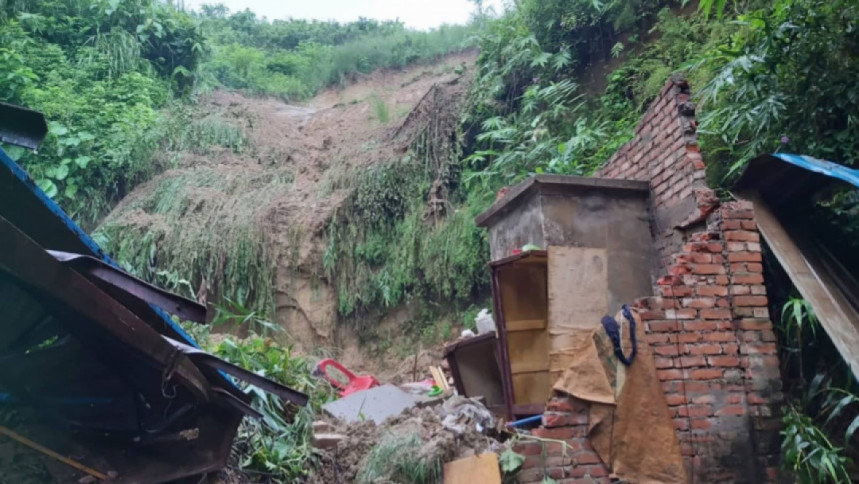 A woman gave her life to save her six-month-old twins during a landslide at the Barishal Ghona Jhiler Pahar under the Akbar Shah Police Station in Chattogram early today.

According to witnesses and neighbours, the twins Tanna and Tinni were unharmed because their mother Shahinur Akhter had them in her lap when the hill-slide landed on her back.

Sadly, Shahinur was unable to survive. Jainal Abedin, her husband, was not present at their tin-shed home as he was visiting his sister in the city’s Sagarika neighbourhood at the time.

After learning about the landslide, he rushed to home before dawn. He had no idea what fate was holding for him.

When Jainal arrived at the scene, he learned that his wife Shahinur (32) and sister-in-law Mahinur (24) had died in the accident, while his mother-in-law Ranu Begun (60) and father-in-law Fazlul Haque (70) had suffered critical injuries. As if the sky collapsed on Jainal. He was looking for his two daughters when he learned that they were unharmed in the incident.

“It was raining since yesterday morning and people from the administration were asking everyone to leave the houses in hill-slope,” Jainal lamented at Chattogram Medical College Hospital (CMCH), adding that, “We have been living there for almost 10 years and had not faced any accident during the rain so far. So we thought nothing would happen this time either.”

“I didn’t know it would affect my family so fatally,” he said

Fazlul and Ranu are currently undergoing treatment at CMCH. Fazlul has injuries in his backbone while Ranu has injuries on her head.

Fazlul said they were asleep when the accident happened at about 2:45 am. While lying on a bed at the CMCH ward, he said, “The neighbours and fire fighters saved us. I heard a loud boom and then woke up to feeling a something heavy on be.”