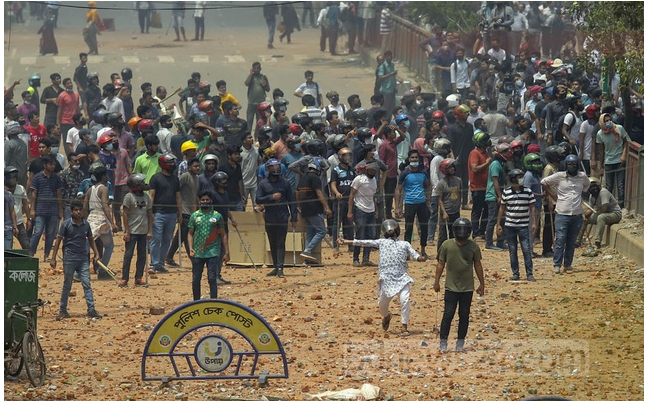 The police responded to the claim made by the lawyer of the BNP leaders that the names of the two workers who were killed and living abroad were included in the list of accused in the case of clash in New Market area.

New Market Police Station OC SM Qayyum told bdnews24.com on Wednesday, “Is there only one person in the world with one name?”

Hundreds of other businessmen and students have been named in the case filed by New Market Police Station Inspector (Investigation) Yamin Kabir on charges of ‘rioting, arson, obstruction of police work’ during the clashes.

Police have so far arrested Advocate Maqbool Hossain, the main accused in the case. Maqbool, a former president of New Market Thana BNP and a member of the convening committee of the present Mahanagar Dakshin, is the owner of the two shops where the clash with the students of Dhaka College started on April 16 over the quarrel of the employees of the two shops.

None of the accused were identified in the case. However, Maqbool claimed that he was accused because of his political identity. The other 23 people named in the case are also leaders and activists of BNP and its affiliates.

Of those 23, 14 applied to the High Court on Tuesday and were granted six-week anticipatory bail. At the end of the bail period, they have been asked to surrender to the court.

After the bail hearing, their lawyer Kaiser Kamal told reporters outside the court, “Mintu, the 23rd accused in the case filed by the police against 24 people, died two years ago. He used to do Juba Dal politics. The fourth accused, Tipu, former president of Dhaka College Chhatra Dal, has been in Japan for seven years. ”

The OC of New Market Police Station counter-questioned, how did the lawyer confirm before the arrest that the two persons were the same person?

“How did the lawyer confirm that this is Mintu?” What is the name of a person Mintu! And Tipu’s thing… that which is said ‘I don’t eat bananas in Thakur’s house’ – seems to be the case. In fact, the lawyer should have read the statement. ”

Maqbool in jail after remand

BNP leader Maqbool Hossain, who was arrested in the case, was sent to jail by a court on Wednesday after a three-day police remand.The investigating officer of the case, Inspector Haldar Arpit Tagore of New Market Police Station, produced Maqbool in the court and requested to keep the accused in jail. On the other hand, his lawyer applied for bail on behalf of Maqbool.

Dhaka Metropolitan Magistrate Ishrat Jahan ordered Maqbool to be sent to jail on Thursday for a bail hearing.

Former president of Dhaka Bar Iqbal Hossain was present at the hearing on behalf of Maqbool Hossain. On the other hand, lawyer Azad Rahman represented the state.

Lawyer Iqbal had sought medical treatment for Maqbool Hossain’s illness. The court directed to arrange his treatment as per the jail rules.

On the afternoon of April 22, the court remanded Maqbool in Dhanmondi, the day after his arrest. Police said he was interrogated and obtained “important” information.

Asked about this, New Market Police Station OC Sam Qayyum told bdnews24.com: The next step is after verification and selection. ”