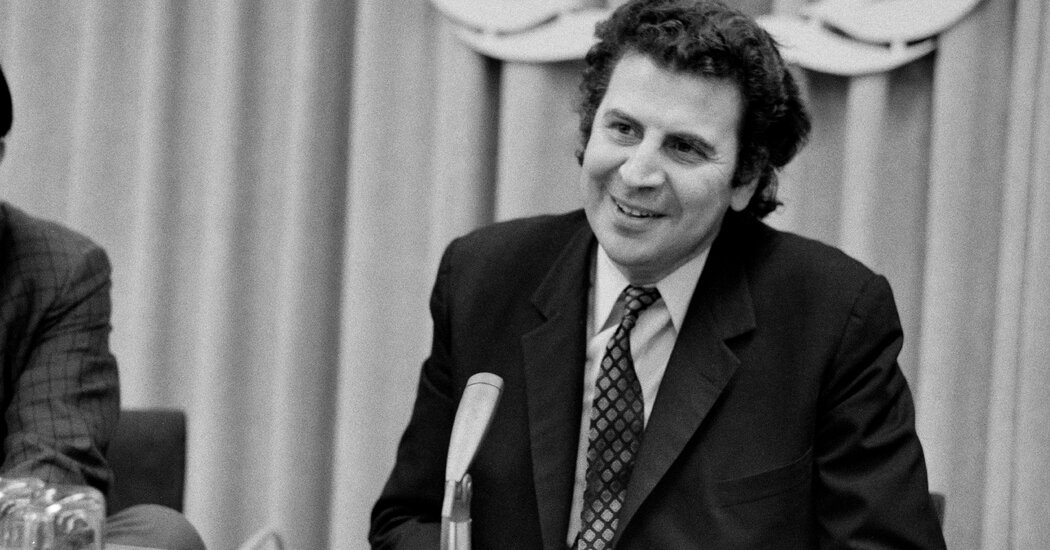 The European government told Greece it was violating its treaty on human rights and called on the junta to end torture, release political prisoners and hold free elections. The colonels rejected the appeal, but they released Mr. Theodorakis and sent him and his family into exile in Paris, where he was hospitalized and treated for tuberculosis.

Three months later, he conducted the London Symphony Orchestra in his triumphant “March of the Spirit.” The crowd’s emotions spilled over. “It was as if Zorba himself were conducting,” Newsweek wrote at the time. “When it ended, the audience wouldn’t let him leave; prolonged applause, cheers, stamping feet and rhythmic cries of ‘Theodorakis! Theodorakis!’ brought him back five times.”

The concert began Mr. Theodorakis’s four-year campaign for a peaceful overthrow of the junta. Touring the world, he gave concerts on every continent to raise funds for the cause of Greek democracy. He won support from cultural and political leaders. In Chile, he met the country’s Marxist president, Salvador Allende, and the poet Pablo Neruda. He later composed movements to Neruda’s “Canto General,” his history of the New World from a Hispanic perspective.

He was received by President Gamal Abdel Nasser of Egypt, Marshal Tito of Yugoslavia, the Palestinian leader Yasir Arafat and President François Mitterrand of France. The Swedish leader Olof Palme, the West German chancellor Willy Brandt and his old friend Melina Mercouri, the actress who had become the Greek minister of culture, pledged help. Artists and writers around the world became his allies.

By 1973, facing international pressure and a restless civilian population, the junta’s hold was shaky. A student uprising in Athens escalated into open revolt. Hundreds of civilians were injured, some fatally, in clashes with troops. Colonel Papadopoulos was ousted, and martial law was imposed by a new hard-liner. In 1974, the junta collapsed when senior military officers withdrew their support.

Within days, Mr. Theodorakis returned home in triumph, welcomed by large crowds, his music playing constantly on the radio. “My joy now is the same that I felt waiting in a cell to be tortured,” he said. “It was all part of the same struggle.”