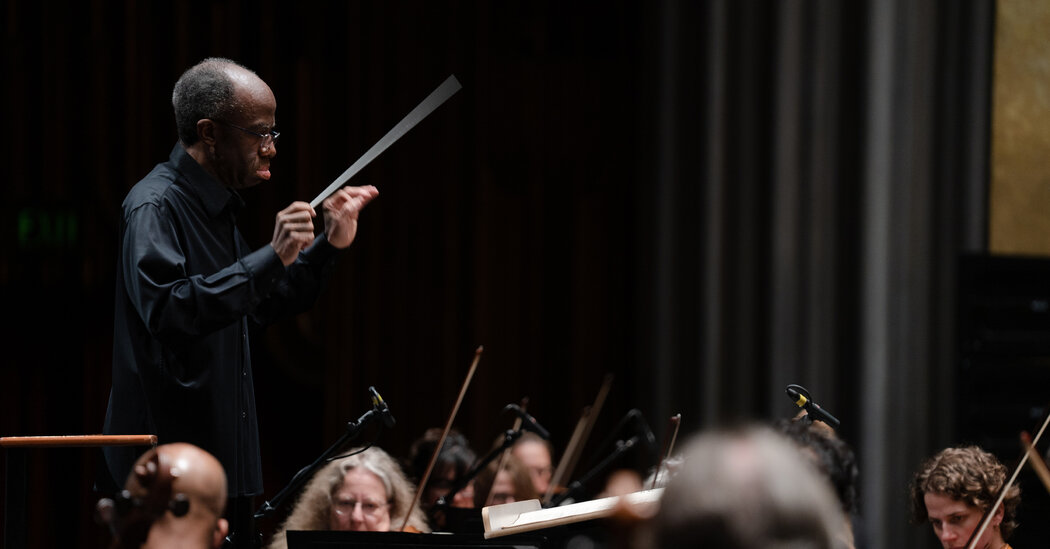 Michael Morgan, the music director of the Oakland Symphony, who in his 30 years in that post sought to bring orchestral music to a broader audience, particularly young people and people of color, died on Aug. 20 in Oakland, Calif. He was 63.

The cause was complications of an infection, the orchestra said. Mr. Morgan had received a kidney transplant in May and had just resumed conducting last month.

As one of the few Black maestros leading a substantial professional orchestra, Mr. Morgan was eager to diversify the symphony’s programming and its audience.

“My main goal,” he told the weekly newspaper The California Voice in 1991 as he was beginning his Oakland tenure, “is to show the rest of the field of orchestra music that you can make an orchestra relevant and of interest to the community, especially to Black youngsters who some may think are not interested in anything.”

He made countless visits to schools in the area. He brought in an eclectic list of guest artists to the Paramount Theater, the orchestra’s home base, including Isaac Hayes in 2001 and Carlos Santana in 2010. He initiated a program called “Playlist” in which guests including the comedian W. Kamau Bell and the labor activist Dolores Huerta selected and introduced pieces to be performed.

Colleagues said Mr. Morgan was interested in more than simply putting on an entertaining program.

“Michael wasn’t afraid to address social issues head-on, and we (the Oakland Symphony) were the tools he used to bridge the gap between races and different political beliefs,” Dawn Harms, co-concertmaster of the symphony, said by email. “There was nothing like an Oakland Symphony concert with Michael at the helm. The audience was so incredibly diverse, joined together under one roof, rocking the Paramount Theater with such a joyful, enthusiastic noise.”

A feature article about Mr. Morgan in The San Jose Mercury News in 2013 bore a telling headline: “Nobody Falls Asleep When Michael Morgan’s Conducting.”

Michael DeVard Morgan was born on Sept. 17, 1957, in Washington. His mother, Mabel (Dickens) Morgan, was a health researcher, and his father, Willie, was a biologist.

He grew up in the city, where he started taking piano lessons when he was 8. By 12 he was conducing his junior high school orchestra.

Mr. Morgan studied composition at Oberlin Conservatory of Music in Ohio. At 22 he entered the international Hans Swarowsky conducting competition in Vienna — just for the experience, he said later — and ended up winning. That earned him a chance to conduct Mozart’s “The Abduction From the Seraglio” at the Vienna State Opera in 1982.

Georg Solti made him assistant conductor of the Chicago Symphony Orchestra in 1986. In his seven years there he also regularly directed the Civic Orchestra of Chicago and the Chicago Youth Symphony. And he began to develop a sense of mission.

“When I began my career, I was not involved in the idea of being a role model or increasing minority numbers in the field,” he told The Chicago Tribune in 1993. “I came to realize, however, that someone has to take responsibility.”

Mr. Morgan was a guest conductor with numerous major American orchestras, as well as with New York City Opera, Opera Theater of St. Louis and the Washington National Opera. When he conducted the New York Philharmonic in 1992, news accounts said he was only the fifth Black conductor to do so.

At the time, he told The New York Times that he felt his race was both a help and a hindrance.

“I have a very nice little career now,” he said, “but I also know that sometimes that’s because it has been to the advantage of an organization to have me, an African-American, around. I see what others my age do, and that there are more star-studded careers that I have no doubt I would have if I were not Black.”

Lack of diversity has long characterized the classical music world. A 2014 study found that only 1.8 percent of the players in top ensembles were Black and just 2.5 percent were Latino.

Mr. Morgan’s last two years in Chicago overlapped with his tenure in Oakland. By then he was fully committed to getting more young people, especially young Black people, interested in orchestra music.

“It could add one more piece to the puzzle of their lives,” he told The California Voice in 1991.

A high point of any Oakland season was Mr. Morgan’s annual “Let Us Break Bread Together” concert, held late in the year and featuring a musical cornucopia that might include gospel singers, choruses of various kinds, a klezmer band and high school students. Each year had a theme, and the range was wide — Pete Seeger music in 2014; Frank Sinatra the next year; music related to the Black Panthers the next.

“In Oakland, we’re very conscious of social justice issues,” Mr. Morgan told The San Francisco Chronicle in 2016. “Oakland has always been about, and continues to be about, social change.”

James Hasler, president of the symphony’s board, said that outlook defined Mr. Morgan.

“His vision of orchestras as service organizations was a beacon locally and nationally,” he said in a statement. “This vision is his legacy.”

“Michael challenged us to speak directly to our community,” Dr. Hatano said by email. “‘It’s not what we talk about,’ he would say. ‘It’s who is in the room when we’re taking about it.’ He wasn’t a conductor who also had a social conscience. To Michael, it was one and the same. And this is how the Oakland Symphony will carry on.”

Mr. Morgan, who lived in Oakland, is survived by his mother and a sister, Jacquelyn Morgan.

In late July Mr. Morgan made a guest-conducting appearance with the San Francisco Symphony, delivering a striking program that included an overlooked female composer, Louise Farrenc, and a dash of 1920s jazz.

“For San Francisco audiences,” Joshua Kosman wrote in a review in The Chronicle, “the whole evening felt like a little burst of vitality from across the bay.”