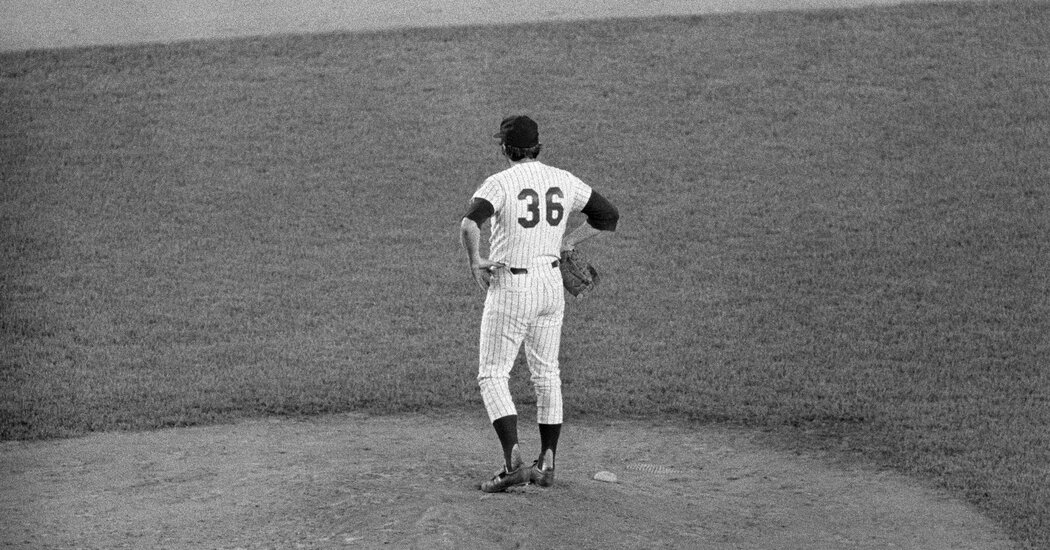 Back in late June, I went to a Mets-Phillies doubleheader at Citi Field and by the second inning of the first game I started to find myself assuming the worst.

At that point, four and then five and then six Mets had struck out in succession against the Phillies’ Aaron Nola. That left Nola just four short of the record for most consecutive strikeouts by a pitcher in a single game, a record that had been set by Tom Seaver and had stood for 51 years.

Seaver had died the previous August and those 10 straight strikeouts he notched against the San Diego Padres on April 22, 1970 — the final 10 outs of the game, no less — were a fine testament to who he was as a pitcher and a Met. And yet here were the 2021 Mets, his own descendants, swinging and missing and swinging and missing. Seaver’s record appeared to be in danger.

The Mets’ Jacob deGrom had taken his own run at Seaver’s mark in April, striking out nine Rockies in a row before the 10th hit a grounder to second. But a great Mets pitcher topping another great Mets pitcher was one thing; a conga line of hapless Mets hitters sabotaging Seaver’s record was quite another.

When Nola struck out three more Mets in the third inning, running his streak to nine, you wondered if there was any awareness in the Mets’ dugout that they were about to track mud all over one of the few moments of real distinction in the team’s history. I had witnessed an ocean’s worth of futility in my nearly 60 years as a Mets fan, but this was a step too far.

Showing no desperation, Michael Conforto struck out as well, making it 10 in a row. But dumb luck intervened and Pete Alonso, with Nola only one strike away from grabbing the record all for himself, stuck his bat out and looped a drive down the right-field line that landed fair for a double. Nola’s strikeout streak ended at 10 and Seaver’s record was at least half-preserved.

Which brings us to Saturday night. The Mets have once again fallen apart, but they will take a timeout from their continuing misery and hold a pregame ceremony to retire the No. 36 uniform that Jerry Koosman wore for the Mets for 12 seasons. So two months after they sideswiped Seaver’s strikeout record, the Mets will do something they don’t do enough of, which is to fully honor one of their own.

And Koosman surely deserves the gesture.

In 1969, of course, he was the left-handed counterpart to the right-handed Seaver, the two of them pitching one complete-game victory after another down the homestretch of the regular season. It would never happen now, in this era of pitch-count limits, but it was kind of remarkable even back then.

In the World Series that year, against the Orioles, Koosman took a no-hitter into the seventh inning of Game 2 and then pitched all nine innings in Game 5 as the Mets completed their stunning run to their first championship. Four years later, Seaver and Koosman were back in the Series again, although the Mets fell to the A’s in seven games.

And that was that. They had arrived on the Mets together in 1967 and Seaver was the first to leave, exiled to Cincinnati in 1977 by M. Donald Grant, the Mets’ imperious chief executive. Koosman stuck around for one more season, going a sorrowful 3-15 as the Mets finished in last place. Koosman then spent six seasons with the Twins, the White Sox and the Phillies. In his first season away from the Mets, he immediately rebounded with a 20-13 record. Make of that what you will.

He now becomes just the third Mets player to have his number retired, joining Seaver’s No. 41 and Mike Piazza’s No. 31 (the team also has retired the numbers of managers Casey Stengel and Gil Hodges). Unlike Seaver and Piazza, Koosman is not a Hall of Famer and unlike those two, he has a distracting asterisk on his résumé — a 2009 misdemeanor conviction on federal tax-evasion charges that led to a six-month jail sentence.

Imperfect he surely is and imperfect we all are — and if we are speaking of imperfection, the Mets are surely at the top of the list. So it is good that Koosman is being honored, weather permitting, and that a statue of Seaver, which should have been in place years ago, is finally set to be unveiled outside Citi Field at the start of next season.

History is fragile, easily ignored or forgotten or, in the case of that game in June, accidentally stepped on. The Mets would be wise to do a more determined job of embracing what little greatness has come their way.

As it is, Seaver’s mark of 10 straight strikeouts probably won’t last much longer. The Brewers’ Corbin Burnes struck out 10 straight Cubs earlier this month and with too many players now striking out too much of the time, some pitcher is likely to get to 11 pretty soon.

But even when that record goes, Seaver’s No. 41 is firmly in place at Citi Field, and now the No. 36 of Koosman, his old partner, will join him. Which is the way it should be.

Jay Schreiber is the former baseball editor of The New York Times.