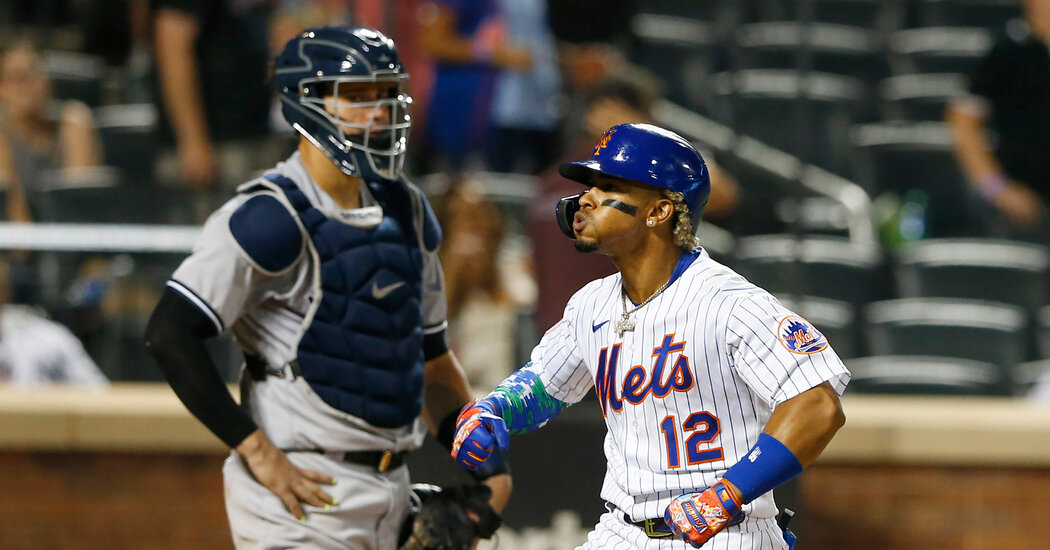 Three home runs by Francisco Lindor of the Mets, including a go-ahead shot in the eighth inning, would seem to be enough to qualify as a memorable Subway Series game.

But all anyone was talking about afterward was whistling.

As Lindor circled the bases after his second home run in the sixth inning, he made a whistling gesture as an allusion to accusations that the Yankees had been whistling in the dugout on Saturday to signal what pitches the Mets were throwing.

“I can’t accuse them of them whistling for the signs because I’m not 100 percent,” Lindor told reporters after the game. “But I know what I heard, and I felt like there was something out of the ordinary going on.”

Giancarlo Stanton of the Yankees tied the game at 6-6 with a homer of his own in the seventh. As he rounded second, he came nearly to a stop and jawed at Lindor, who was playing shortstop. This time, both benches cleared and even the relief corps came dutifully out of the bullpen. There was plenty of milling around and words were exchanged, but matters didn’t escalate to a full-scale brawl.

After the game, Stanton said he was prompted to say something by Lindor’s own vocal home run trot.

As to the accusations of pitch-tipping, Yankee Manager Aaron Boone said: “The last couple nights, we’ve just been loud over there. Not doing anything.”

Of Sunday night’s fracas, he said, “Boys will boys, and that’s about it.”

Mets Manager Luis Rojas wanted no part of the discussion. “I’m not going to talk about the events that unfolded,” he said.

The last laugh went to the Mets, though, when Lindor hit his third homer of the night in the eighth inning. That gave his team a 7-6 win and a two-of-three series victory over the Yankees.

It was the first three-homer game for Lindor, who has struggled at the plate this year, and it made him the first player to accomplish the feat in a Subway Series game.

New York fans are sometimes known for prizing players who show passion — even to the point of contention — more than those who simply perform well. Lindor, who arrived in a trade in the off-season, was asked if the contretemps with the rival Yankees had made him a true New Yorker, but he doesn’t believe he’s reached that status.

“I don’t have the accent yet,” he said with a smile.

Lindor’s fieriness, though, might go some way toward reassuring Mets fans who were aggrieved by several players offering thumb’s down gestures to their own fans earlier this month after being booed.

The weekend’s games were especially charged because the Yankees remain in the thick of the wild-card race with the Red Sox and Blue Jays, and the Mets are hanging around the outskirts of the National League playoff picture as well. The drama was amplified because the series coincided with the 20th anniversary of the Sept. 11 attacks. The teams had symbolically taken the field together on Saturday. By Sunday it was business as usual between the rivals.