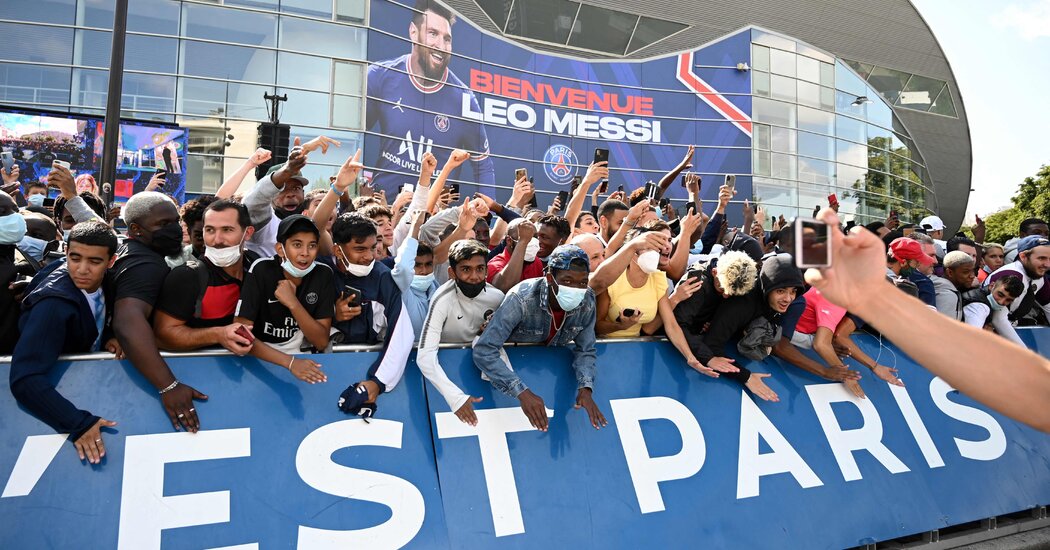 PARIS — When Lionel Messi said goodbye to Barcelona, his home since childhood and the place he grew to become one of soccer’s greatest ever players, he was in tears.

Three days later, when he was formally introduced on Wednesday by his new club, Paris St.-Germain, any tears in the crowd were expressions of joy.

“It’s wonderful,” said Alexandre Marienne, 32, carrying his 8-year-old son Kamil on his shoulders. “He’s going to help us build something incredible — Paris is definitely competing with the big names now.”

When Messi addressed reporters, sitting next to the club’s president, Nasser al-Khelaifi, he said leaving Barcelona was “a very hard moment” but that he was “very happy” to be in Paris.

It was the culmination of stunning few days, in which Barcelona’s fans and players bid farewell in shock to the club’s greatest player, while in the French capital, P.S.G.’s fans hold their breaths, many unable to fathom what was happening.

But the financial forces that drive the game were greater than either individual or collective desire. The club could not afford Messi, even after he offered to cut his salary in half.

So here he was, in Paris, about to play in the French Ligue 1, where financial rules akin to those that tied Barcelona’s hands will not come into force for a few more years.

“The moment I arrived here, I felt very happy,” he said.

Rarely has an athlete in the modern era been so associated with a single team. Maybe Michael Jordan and the Chicago Bulls is the closest comparison for American sports fans.

But Messi’s connection to Barcelona ran deeper: He arrived at the club when he was only 13.

So it was a strange sight to see him holding the jersey other than one sporting the familiar colors of Barcelona.

But the legions of fans who greeted him in his new home city opened their arms in an embrace that, for the moment, overshadowed the darker message his transfer sent about the sport that Messi has so dominated.

They did not come to discuss the danger posed by the immense advantage a small number of superrich clubs have in buying and keeping players.

They came simply to see Messi.

Men and women, many with their children by their side, came from all over Paris and other French cities far and near. Some were not from France at all. But they were all bonded by Messi.

They gathered at the Parc des Princes, Paris St.-Germain’s stadium, to catch a glimpse of their talisman, who arrived in the French capital on Tuesday and signed a two-year deal with the French club.

Mr. Messi called the ecstatic reception “crazy,” and said he was excited to get back to the business of playing soccer with some of the best players in the world.

For many, the signing was no surprise: P.S.G., bankrolled by the state of Qatar, was only one of handful of clubs that could afford the 34-year-old star from Argentina.

Yet countless supporters could still not believe it.

“It’s just crazy stuff — we were not even dreaming of it,” said Yohan Aymon, a 19-year-old P.S.G. fan and forward for F.C. Sion, a Swiss club, who drove from his native Switzerland overnight.

Since Qatar became the main stakeholder of Paris St.-Germain in 2012, supporters have watched the coming of a steady stream of the world’s most expensive players.

From Zlatan Ibrahimovic to Neymar, David Beckham to Kylian Mbappé, Gianluigi Buffon to Sergio Ramos, no club has signed as many stars in the past 10 years.

That has drawn criticism from countless clubs, players and managers in France and abroad, who argue that the competition is now unfair and biased toward state-sponsored teams like P.S.G. or Manchester City.

But none of them, it seems, compares to Messi’s arrival. Fans lined up around the stadium at dawn on Wednesday, chanting and shouting as a giant photo of the player adorned the Parc des Princes, less than a day after Messi’s face was removed from the Camp Nou in Barcelona.

“He made football magic, beautiful, and he’s a winner,” P.S.G.’s president said about Messi, as he stood next to him at a news conference on Wednesday. “There’s no secret he’s the best player in the world.”

“We are entering a new dimension,” said Mr. Marienne, who said he had moved his vacation in southern France with his family to see Messi. “P.S.G.’s possibilities seem unlimited now.”