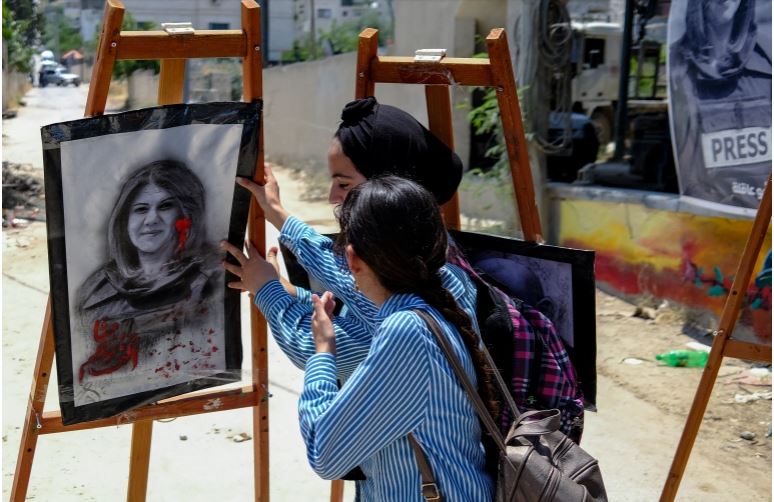 Hundreds of people have attended a memorial event to mark 40 days since the killing by Israeli forces of well-known Al Jazeera journalist Shireen Abu Akleh, who was shot dead last month in the occupied West Bank city of Jenin.

Al Jazeera correspondent Nida Ibrahim, reporting from Ramallah in the West Bank, said hundreds gathered at the memorial event on Sunday where participants signed a petition wall to publicly demand justice for the slain journalist.

“People here are writing their names demanding accountability for what they call a cold-blooded murder,” Ibrahim said.

Organised to commemorate 40 days since the killing of the prominent journalist, Ibrahim said people attending the event were frustrated that justice has not been served on those who killed Abu Akleh.

“We hear a lot of words of condemnation. People are angry. They are frustrated. They want the world to see what is happening to those who tell the truth, who are carrying the people’s voices to the world,” she said.

“Shireen was someone who was very well known, very much respected, so loved.”

A book of condolence opened at the memorial event in the Ramallah Cultural Palace contained messages from attendees, according to Ibrahim, including a former colleague who recounted how Abu Akleh had taught them to write news but they never expected that one day they would be writing about the killing of their friend and colleague.

“People say she was not only someone who was strong but who empowered women in Palestinian society to know they can be on the front line, respected, and appreciated for what they do,” Ibrahim said.

Palestinian-American Abu Akleh was shot dead while covering an Israeli army operation in Jenin on May 11.

The Palestinian Authority, Al Jazeera and Qatar, where the channel is based, have accused the Israeli army of deliberately killing Abu Akleh. Several journalistic investigations have also pointed in the same direction.

A Palestinian investigation said the reporter – who was wearing a bullet-proof vest with “press” written on it and a helmet when she was shot – was killed in what it described as a “war crime”.

Israel has denied the allegations, arguing that Abu Akleh could have been killed by a Palestinian gunman, but later said it could not rule out the possibility that it was Israeli soldiers.

Al Jazeera Media Network announced on May 26 that it had assigned a legal team to refer the killing to the International Criminal Court (ICC) in The Hague. The case was recently handed over to the ICC prosecutor. However, the current status of the investigation remains unclear.

The Israeli army has not released findings following an internal investigation into the killing.

The Israeli police also have not yet released the findings of an internal investigation launched following an international outcry after Abu Akleh’s coffin was almost dropped when police attacked the pallbearers during her funeral.

US State Department spokesman Ned Price has said the United States is seeking more information about the investigation into the police violence at the funeral.