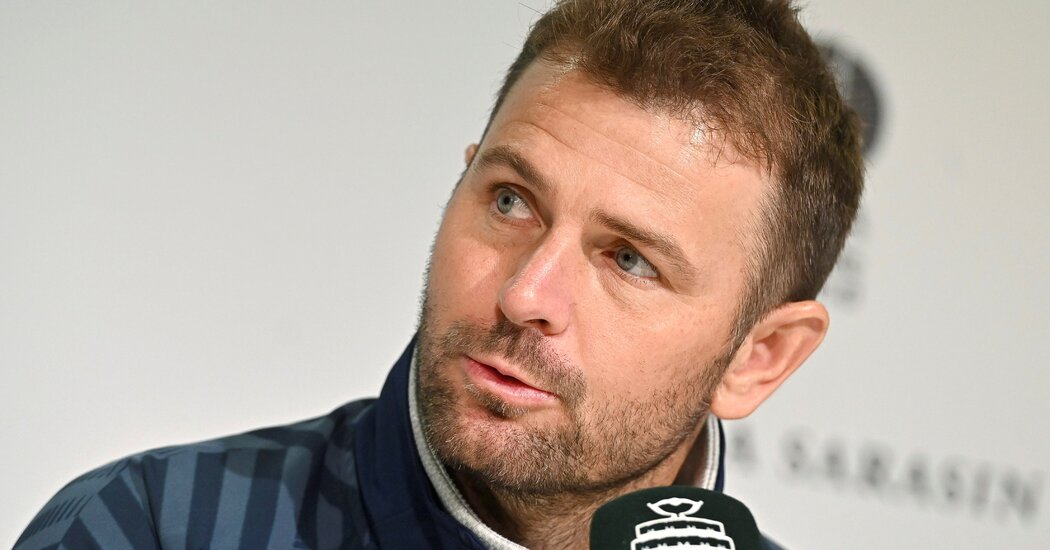 The fourth-round singles matches at the U.S. Open were underway on Sunday, and Mardy Fish, the Davis Cup captain and former tennis star, was remembering the moment nine years ago in New York when he sat in the car sobbing with his wife, Stacey, and decided, with her help, that he could not play in the fourth round against Roger Federer.

“It was just crazy anxiety, crazy, crazy, just how am I going to walk out on this court?” he said by telephone from his home in Los Angeles. “But it never, never would have crossed my mind, if my wife wasn’t there with me, that I wouldn’t play. We’re so trained to never show weakness, never show fear, to the other side of the court. But my wife saying, ‘Well, you don’t have to play’ — that part right there was like, right away, just instantly, I felt better, like a weight was lifted off my shoulders.”

Fish is now 39, a parent with Stacey of two young children. He works in finance and is still involved in professional tennis as the U.S. Davis Cup captain. But he is also a mentor, sharing his experience as a prominent athlete who had to deal with mental health problems when the subject was close to taboo in professional sports.

“The reason why I’m so vocal or open about it now is that I didn’t have that success story to lean on when I was going through it,” he said.

He is friendly with Naomi Osaka and her agent Stuart Duguid, and empathized when Osaka announced tearfully on Friday after her third-round defeat at the U.S. Open that she planned to take an indefinite break from the game that no longer brings her joy, even when she wins.

“I would tell her, do whatever makes you happy,” Fish said. “She doesn’t have to hit another tennis ball the rest of her life, and if that makes her happy, that’s what she should do. I think she would regret that, but it’s whatever makes her want to get up in the morning and be happy. And whatever she’s been doing for the last couple months, or however long it’s been, is not doing that for her right now. So hopefully she finds peace and comfort.”

Fish spent months housebound with repeated anxiety attacks after his withdrawal in New York. He received therapy and medication.

After playing intermittently on tour, he returned to the U.S. Open in 2015 and won a round. It was the upbeat closure that he desired and is part of the journey he shares in a documentary that will be released on Tuesday as part of the Netflix “Untold” series.

“To educate is really the most important thing,” Fish said. “To try to reach people that have never understood mental health or had issues with it or people around them who have had issues with it. To just educate them and just understand that Naomi Osaka is not going to pull out of the French Open just because she doesn’t want to talk to the press. And Simone Biles is not going to compete in the Olympics just because she doesn’t want to lose. The people that think that, and there are lots of them, it’s just unfortunate.”

For Fish, one of the keys is to stop regarding mental health as separate from physical health.

“It’s just health,” Fish said. “They call it mental health, but your brain is part of your body. It’s an injury. You just can’t see it.”

Long considered one of the most talented players of his era, Fish improved his fitness and broke through in 2011 to reach the top 10 and qualify for the eight-man tour championships. But he said his rise also created new expectations and stresses.

“My life changed, for the better initially, and then just my body and brain, the way I’m put together, couldn’t handle it,” he said.

In 2012, he began experiencing a racing heartbeat that would wake him in the middle of the night and was diagnosed as a form of arrhythmia. Though he was treated for the condition, the underlying issue was an anxiety disorder, and while playing tennis was a refuge, he also began experiencing panic during his third-round win over Gilles Simon at the 2012 U.S. Open.

“It was like my only comfort was taken away from me that night and it put me into basically rock bottom, zero serotonin left in my brain,” he said.

“It’s not about being tough. I practice kickboxing and muay Thai right now, like, come on, I’ll take anyone on in the ring. You can punch me in the face all you want, and I’ll hit you back. I train that stuff. It’s not about being weak. I was strong mentally. I was a bulldog. To win, I would have sacrificed anything. I’ll put my competitiveness up against anyone’s. It’s not about that. It’s actually the opposite. Showing weakness and that vulnerability is actually showing strength, in my opinion.”

Fish is working as a mentor during the U.S. Open as part of a new initiative from the United States Tennis Association to provide more mental health resources for players, including on-call psychologists. Claudia Reardon, the U.S.T.A.’s new mental health consultant, is overseeing the program.

Fish said no player had yet contacted him during the tournament, but he said “tons of people” had contacted him since he began speaking openly about his condition.

“People you’ve heard of; people you’ve never heard of,” he said. “Coaches, players, from tennis and other sports. It’s been really nice to be helpful in that way. I’ve made some great relationships because of it, so it’s been comforting in that way, to know I wasn’t alone and that other people wanted to be vulnerable as well, just not to the world.”

Osaka, like Fish, has taken a more open approach, revealing this year that she struggled with anxiety and depression since winning her first Grand Slam singles title at the 2018 U.S. Open. In a round-table discussion before this year’s Open, she, Fish, Nick Kyrgios and Billie Jean King talked about multiple topics, including mental health and media relations.

Though Osaka spoke before and during the Open about her desire to focus on the positives of being a world-class player, she struggled with her emotions in her loss on Friday to the Canadian teenager Leylah Fernandez. She tossed her racket and knocked a ball into the stands in frustration and then teared up at a news conference. She said she did not know when she would play her next tennis match.

“Recently, when I win, I don’t feel happy,” she said. “I feel more like relief. And then when I lose, I feel very sad, and I don’t think that’s normal.”

Fish was watching and listening.

“That last press conference was her being really open,” he said. “I think it’s really important to put yourself first and what you feel is important to you and what makes you happy, and hopefully tennis is in there for her. I think it is. I know she understands her place in history. But the stuff outside the court has now gotten to her more than just wins and losses, and it’s unfortunate, but it’s important for her to make sure she feels comfortable again and happy again.”