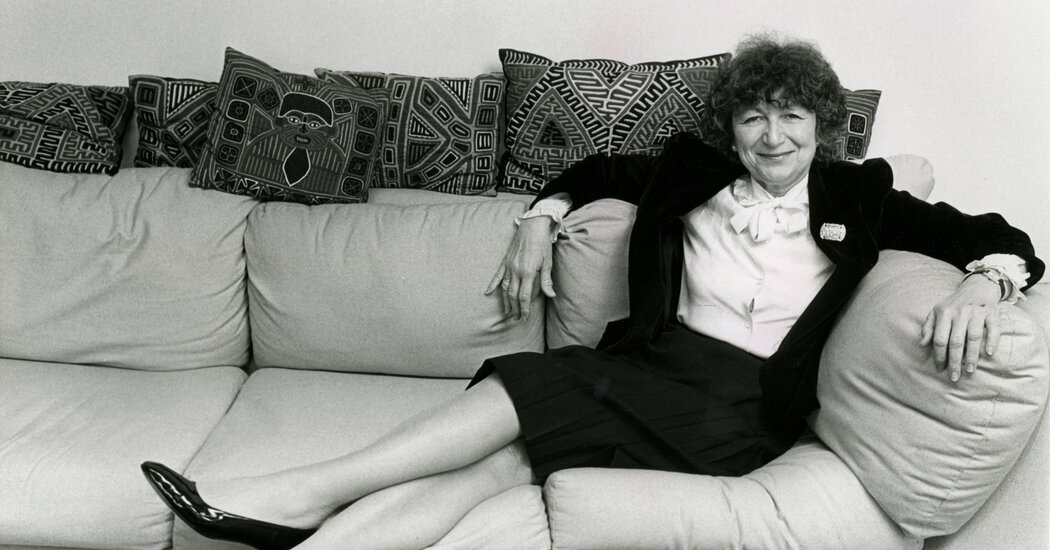 Marcia Nasatir, who was the first woman to become a vice president of a major Hollywood studio — although, unlike some female executives who followed her, she never got to run one — died on Aug. 3 in Woodland Hills, Calif. She was 95.

Her sons, Mark and Seth, confirmed the death, at the Motion Picture & Television Fund’s Country Home and Hospital.

Ms. Nasatir — “the first mogulette,” as she called herself in her email address — was a forerunner of female Hollywood executives like Sherry Lansing, who became the first woman to head production for a studio at 20th Century Fox in 1980, and Dawn Steel, who achieved another first when she was named president of Columbia Studios seven years later.

“She was a grande dame, our first female elder,” Lucy Fisher, a former vice chairwoman of Columbia TriStar Pictures, said by phone. “She gave me my first job, as a reader, at United Artists. And she helped me get my next job, with Samuel Goldwyn Jr.

Ms. Nasatir began her path to Hollywood as a single mother in New York in the 1950s, when she was hired as a secretary at Grey Advertising. After successful stints as an editor at Dell Publishing and Bantam Books, she left for Hollywood to become a literary agent; her clients included the screenwriters Robert Towne and William Goldman.

In 1974, she approached Mike Medavoy, a former top agent who had just been named vice president of production at United Artists. “I hear you’re moving to United Artists,” she said, recalling the conversation years later in “A Classy Broad: Marcia’s Adventures in Hollywood” (2016), a documentary directed by Anne Goursaud. “I think he said, ‘I’m going to need a good story editor,’ and I said, ‘How about me?’”

They met soon after for breakfast, and he offered her a story editor position, in which she would look for books, scripts and plays to turn into movies. It was a traditional job for women in Hollywood. But, at 48, she wanted more and demanded that she be hired as a vice president. (Her title was vice president of motion picture development.)

“It seemed to me,” she told The Arizona Republic in 1985, “that I would be a more effective employee, and my opinions would be more respected by writers and actors, if I had the title of vice president instead of story editor.”

Mr. Medavoy, in a phone interview, said that Ms. Nasatir had brought “taste and reach” to United Artists.

“She was strong-willed and tough but really fair,” he said, “and she got everybody to sign on to being that way, to being collegial.”

Ms. Nasatir worked closely with Mr. Medavoy from 1974 to 1978, a fruitful period for United Artists that begot films like “One Flew Over the Cuckoo’s Nest,” “Carrie,” the 1976 remake of “Invasion of the Body Snatchers,” “Bound for Glory” and “Coming Home” — whose female lead, Jane Fonda, thanked Ms. Nasatir when she accepted her Oscar for best actress.

It was Ms. Nasatir who gave Sylvester Stallone’s screenplay for “Rocky” to the producers Irwin Winkler and Robert Chartoff. The film won the Oscar for best picture and had a worldwide gross of more than $117 million (nearly $555 million in today’s money).

“‘Rocky’ is, of course, the perfect fairy tale,” Ms. Nasatir said in “A Classy Broad.”

Her tenure at United Artists did not have a fairy-tale ending. When Mr. Medavoy and four other executives, including the chairman, Arthur Krim, left United Artists to create Orion Pictures in early 1978, they did not ask her to join them as a partner. And she did not get Mr. Medavoy’s job at United Artists, where he had been in charge of worldwide production; it went to a man, Danton Risser.

She resigned and joined Orion as a vice president, hoping that her former colleagues would make her a partner. But that did not happen.

“They didn’t want to split things six ways, and didn’t value what my contribution was,” she told The Hollywood Reporter.

Mr. Medavoy said in the interview that it was “interesting” that Ms. Nasatir had felt disappointed at not being asked to be a partner at Orion. “Was it because she was a woman? No,” he said. “It was the fact that there were five of us already.”

Marcia Birenberg was born on May 8, 1926, in Brooklyn and grew up in San Antonio. Her father, Jack, sold cloth for men’s fine woolen apparel; her mother, Sophie (Weprinsky) Birenberg, had been a garment worker in New York City before her wedding and talked about going on strike “as one of the greatest moments in her life,” Ms. Nasatir once said.

Wanting to be a newspaperwoman, Ms. Nasatir studied journalism at Northwestern University and the University of Texas, Austin, but did not graduate.

In 1947 she married Mort Nasatir, who was later president of MGM Records and publisher of Billboard magazine; the marriage ended in divorce after six years. She joined Grey Advertising in about 1955 and left after a few years for another secretarial job, at Dell, where she worked for the publisher. While there, she became an editor and recommended that Dell buy the paperback rights to “Catch-22,” Joseph Heller’s dark satirical novel about World War II. Within a year of its publication in 1962, it had sold two million copies.

Ms. Nasatir moved on to Bantam Books, where her biggest coup was suggesting that the company publish the Warren Commission Report on the assassination of President John F. Kennedy within days of its release in 1964, kicking off the genre of “instant” books. She also worked on acquiring paperback rights to books that were being adapted for movies, a role that brought her into contact with Evarts Ziegler, a Hollywood agent, who hired her for his agency in 1969.

“He said, ‘You don’t have anyone to support; a man has a family support,’” she recalled in “A Classy Broad.” “And I said: ‘Zig, I support myself. Why shouldn’t I make as much as a man?’”

United Artists offered her $50,000, and after her four years there and one year at Orion, she was briefly an independent producer before being hired to run the film division of Johnny Carson’s company Carson Productions. While there she agreed to take on, when other studios would not, Lawrence Kasdan’s “The Big Chill” (1983), about former college classmates who gather for the funeral of one from their circle. She became its executive producer, and it proved to be a moderate box office success and an enduring favorite among many baby boomers.

From then on, her career toggled between holding executive positions, with Fox and Phoenix Pictures (which Mr. Medavoy co-founded), and producing films, including “Hamburger Hill” and “Ironweed” (both in 1987), “Vertical Limit” (2000) and “Death Defying Acts” (2008).

Starting in 2008, Ms. Nasatir and the screenwriter Lorenzo Semple Jr., who had been a client of hers when she was an agent, reviewed movies online as “Reel Geezers.” Close friends, they were passionate and deeply informed about moviemaking. He could be dyspeptic. She was more laid back. They kibitzed. They squabbled.

In addition to her sons, she is survived by two granddaughters and a sister, Rose Spector, the first woman elected to the Texas Supreme Court.

Being hired at United Artists had historic significance for Ms. Nasatir, because the studio’s founders had included the actress Mary Pickford. But despite that precedent, she was not destined to run United Artists — or any other studio.

“If I had been born 20 years later, I would have been the head of a studio, which I would have liked,” she told Scott Feinberg of The Hollywood Reporter in 2013. “But I’m content with how things turned out for me and happy to see other women carry the torch even further.”