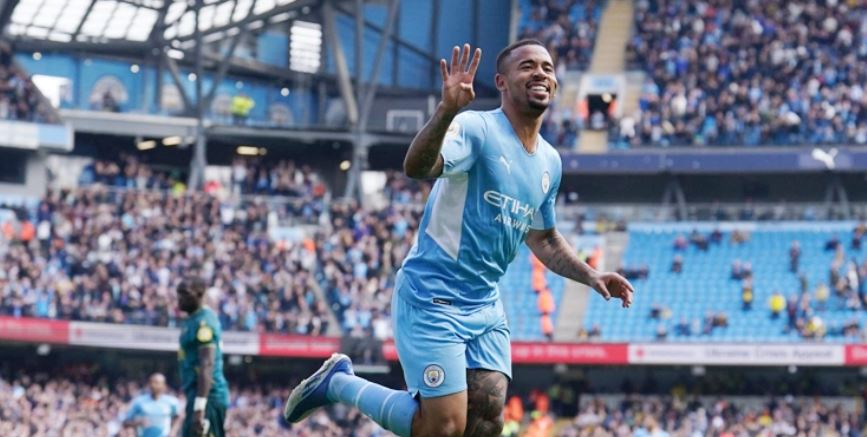 Manchester City’s Brazilian forward Gabriel Jesus has not been doing well in recent times. Criticism was heard for not playing as expected. However, he did not completely finish, he proved in the match against Watford.

Man City beat Watford 5-1 at their home ground Etihad Stadium on Saturday night. Where Jesus alone has scored 4 goals. This is his first hat-trick and double hat-trick in the English Premier League. Jesus even assisted on other goals of the team.

Man City will face Real Madrid in the first leg of the UEFA Champions League semi-final on Tuesday night. Such a flying victory before him will surely give Pep Guardiola’s disciples extra confidence.

Citizens played dominantly in the whole match against Watford. Jesus led the team in the 4th minute of the match. The Brazilian increased the lead with a diving header from Kevin de Bruyne’s perfect cross in the 23rd minute after the first goal in the placing shot.

In addition to the two goals, Jesus also assisted another goal before going into the first half break. In the 34th minute of the match, Jesus cut back for his teammate Rodri. Rodri made the scoreline 3-0 with a strong volley.

Jesus took just 4 minutes to complete the hat-trick back in the second half. If he is fouled in the D-box, the referee blows the whistle for the penalty. Jesus picked up his first hat-trick in the Premier League from a spot kick in 2016 from Palmeiras.

Before the age of 50 minutes of the match, Man City was giving a hint of goal festival by fulfilling Hali. But then there was only one goal. The Brazilian star scored his fourth and the team’s fifth goal in the 53rd minute of the match.

After this victory, Man City has retained the top position with 60 points in 33 matches. Watford is at number 19 with 22 points in an equal match. Number two Liverpool collected 6 points in 32 matches. They will face Everton today.