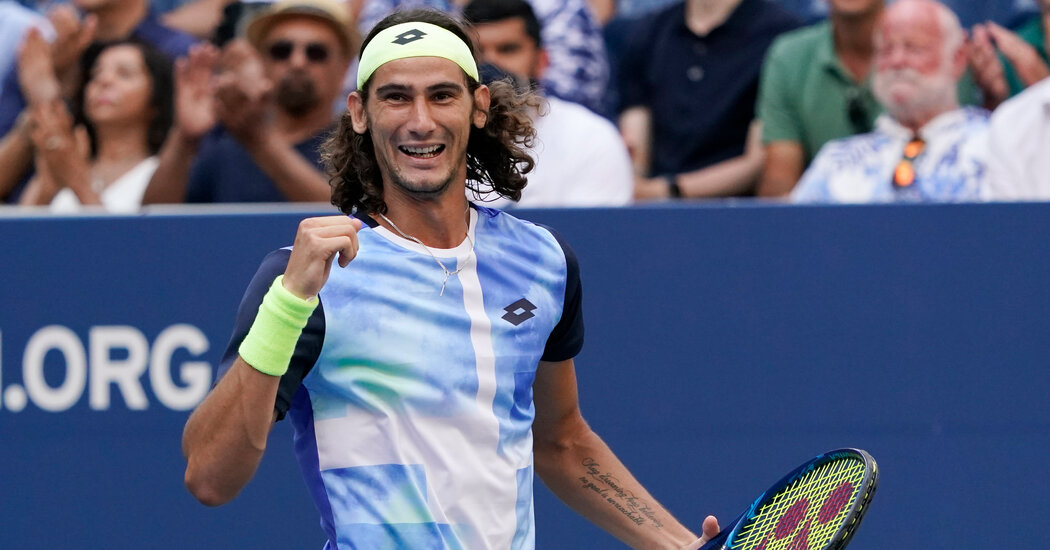 The WhatsApp text chain has grown to about 100 people, many in Cape Town with others spread around the globe, playing tennis and sending their congratulations and enthusiastic messages of support to Lloyd Harris.

“They are all on there congratulating me,” Harris said. “It’s such a special feeling. They are like my family.”

The thread includes the coaches, administrators, parents and kids that train at the Anthony Harris (no relation) academy, where Lloyd Harris developed as a professional tennis player. Lloyd Harris is their inspiration, their affirmation of success, an example that it can work. But most important to all of them, he is their academy brother.

“He means so much to these kids and they all look up to him,” Anthony Harris, who has served as Lloyd Harris’s main coach since he joined the academy in 2012, said in an interview from Cape Town. “They are staying up late and talking about how he great is doing. It’s a fantastic inspiration for everyone.”

What Lloyd Harris, 24, has done is barge into the quarterfinal round of the U.S. Open men’s singles draw to cap a summer that included a win over Rafael Nadal in Washington last month. When he arrived in New York, he beat three seeded players — Karen Khachanov, Denis Shapovalov and Reilly Opelka — to reach his first major quarterfinal, where he will play the No. 4 seed, Alexander Zverev of Germany, on Wednesday.

“I always knew I had the ability,” Harris said. “I never had a problem beating some of the top guys. But it was consistently playing at that level, which was a little bit more challenging for me.”

Harris’s rapid climb is followed with great excitement in Cape Town, his home city, and specifically at the unique academy that helped launch his career. His parents heard about the program and asked Anthony Harris if he would take their son. Lloyd Harris joined in 2012 when he was 14 years old, and quickly became the program’s most accomplished student.

“I told his mum,” Anthony Harris said, “‘Your son is special. He has a chance to do something big in this sport.’ She said, ‘Let’s go for it.’”

The Anthony Harris Tennis Academy, a modest enclave tucked into the tony Bantry Bay area of Cape Town, has grown since Lloyd Harris first joined. It now boasts five coaches, three blue hard courts and one clay court. There is a small residence hall for the most financially disadvantaged students, some of whom lived in shanties before they moved in and attended for free.

It is not a glamorous, corporate academy, but it helped shape Harris into the player and person he is, and both Harrises think of it as family.

“I’ve never once been to the academy where it’s been a bad atmosphere or a bad vibe,” Lloyd Harris said. “It’s always positive energy, the coaches are having fun with the kids, but working hard. It’s just this really special thing.”

Lloyd Harris, who is currently ranked 46th, grew up in a middle class household, but many of the students at the academy are from underprivileged backgrounds.

While academics and human development are a core part of the program, tennis is at the forefront of the academy’s mission. Those who meet certain criteria, regarding their progress through the junior tennis ranks, are given funding to travel the world as they attempt to become professionals. The rest focus on getting a university scholarship.

At first, there were only a handful of kids. Now there are a dozen, and the hope is to be able to accommodate about eight more. The academy has taken one child who was found rummaging for food, and another who showed promise at tennis but was kicked out of a different program for behavioral issues.

“Maybe we can change their life,” Anthony Harris said. “It’s like the old fable about giving someone a fishing rod. We can’t help a thousand kids. But maybe we can help 15 or 20.”

Leo Matthysen, 15, lives in Mitchells Plain, outside of Cape Town, and is the top-ranked junior boy age 15 and under in all of Africa after spending the last several years at the academy.

Kelly Arends and Mikaeel Woodman, also longtime members of the academy, recently earned scholarships to play for Tyler Junior College, a Texas school with one of the premier junior college tennis programs in the United States, and they arrived there two weeks ago to begin their freshman seasons.

Woodman, 18, also grew up in Mitchells Plain, in what he called “a really rough area.” He said had it not been for the academy, he might have ended up in a gang.

“It got me off the street and changed my life,” Woodman said after his practice at Tyler Junior College on Tuesday. “I went when I was 10 and I got to watch Lloyd for seven or eight years. I really want to play professionally, one day, like him.”

With Anthony Harris as the head coach on a staff of eight, tennis is seen as vehicle for success, and Lloyd Harris is their Model T.

Soon after he joined up in 2012, he and the coach began traversing the continent with Lloyd playing tournaments in Kenya, Nigeria, Mozambique, Zimbabwe, Botswana, Morocco and Egypt, to name a few, and then moved on to tournaments in Europe and Asia before he turned pro in 2015.

“One of the things I’m most proud of, and I told Lloyd this,” Anthony Harris said, “is that he never got one wild-card entry into a top-tier tournament. He had to work for everything he got.”

Funding is always an issue for the academy. The family of Nathan Kirsh, an Eswatini billionaire businessman, is a principal contributor and Lloyd Harris is hosting a golf tournament in Cape Town in November to help raise funds for a program that is so dear to his heart.

“We’ve come such a long way and from where it started, this small little program, to what it’s become now,” Lloyd Harris said. “It’s a home for so many kids from underprivileged backgrounds, who now have these amazing opportunities.”

With the demands of his profession, and the difficulty of traveling to and from one of the most remote parts of the earth (at least for tennis travel), Lloyd Harris relocated to Dubai, where he now trains. He has not been back to South Africa all year because of pandemic travel restrictions. He has been working with Xavier Malisse, the former top professional player, in conjunction with Anthony Harris.

But before his pandemic-induced temporary hiatus, Lloyd Harris regularly returned to the academy to practice and hit with the kids on court.

“You should see how they gravitate to him and how he responds,” said Dionne Harris, Anthony’s wife and the main administrator who makes the academy operate smoothly. “He brings them equipment and things and lets them return his serves. He is like the hero.”

Lloyd Harris does not go that far. But he recognizes his role in the lives of all the children on that WhatsApp thread, cheering him on.

“They see how I’m behaving, how I’m working but also enjoying myself on the court,” Lloyd Harris said. “I know they are watching. Hopefully, I can teach them well.”