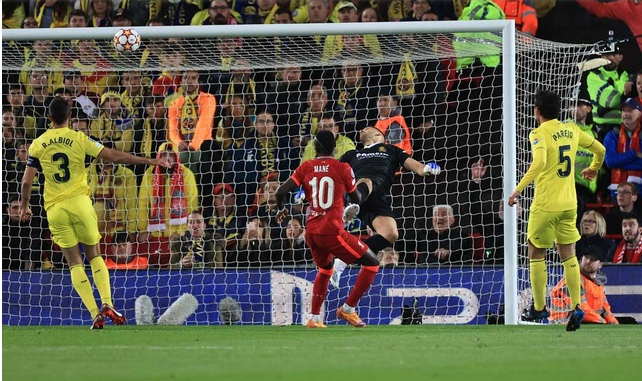 Villarreal put up great resistance in the first 45 minutes, giving birth to two of the biggest mishaps in the first two rounds of the knockout stage. After the attack of Liverpool, however, all their obstacles were broken. Jর্গrgen Klopp’s side advanced to the Champions League final with two goals in two minutes.
The six-time European champions won 2-0 in the first leg of the semi-final at Anfield on Wednesday night. Sadio Mane doubled the lead after the opponent’s suicide goal.

Liverpool put a lot of pressure on Villarreal, who were knocked out of the last 16 by Juventus and Bayern Munich in the quarter-finals. They also got a golden opportunity to advance in the twelfth minute; But Mohamed Salah’s cross from the right side was empty in the D-box but the head could not keep the ball close to the target.

Luis Dias took a strong shot from a distance in the next minute. However, goalkeeper Geronimo Ruli did not have much speed to block the shot. In the 22nd minute, Jordan Henderson’s shot from outside the box and from a difficult angle hit the outside of the post.

Liverpool could not take advantage of the pressure. In the 31st minute, Dias disappointed with another shot along with the goalkeeper. In the next minute a quality shot hits the foot of one of the opponents and goes out of the post. Except for a moment, Salah’s volley flew over the crossbar.
Viral was busy managing the flow of the attack, hoping to shake the opponent in a sudden counter-attack. Although they could not do much in the first half. However, there was an impression of confidence in handling their defense.

The hosts could have gone ahead in the 42nd minute, but Thiago Alcantara’s long-range shot was blocked at the top of the post.

In the fifth minute of the second half, which started in the same way, there was a hint that Villarreal’s dam had broken. Fabinio sent the ball into the net, but Virgil von Dyke was offside and the goal did not match.

Liverpool took control of the match by sending the ball into the net twice in the next five minutes.

Jordan Henderson took a shot from the right side in the 53rd minute. To prevent it, Pervis caught Estupinan’s extended leg and the ball bounced higher into the net, evading the goalkeeper.

Two minutes later, Salah increased the pass through the gap between the legs of defender Pao Torres in the mouth of the D-box. And that means beating the goalkeeper with a great tap.
The Senegalese forward has scored a total of 20 goals this season.
Andrew Robertson sent the ball back into the net for Villarreal in the 64th minute. But he was clearly offside. After five minutes, the bullet speed shot from the distance of Fon Dyke was straight, but Ruli had to get speed to stop it.

Viral can take the first shot towards the end. However, there was no problem in stopping the bullet shot by Alison who spent stress free time in the post.

Despite an easy win at home, Liverpool have no chance of reliance when the fight is two-legged. Villarreal’s stellar performance in the current season is also quite intimidating.

After a 1-1 draw at home in the last 16, Villarreal went on to win 3-0 at Juventus. In the quarter-finals, after winning 1-0 at home, they went to the field of Bayern in the return round and drew 1-1.

This time Liverpool could not make the gap too big. So the possibility of another surprise and non-occurrence of Viralias cannot be ruled out. Next Tuesday, Unai Emery’s team will take the field known in that dream.